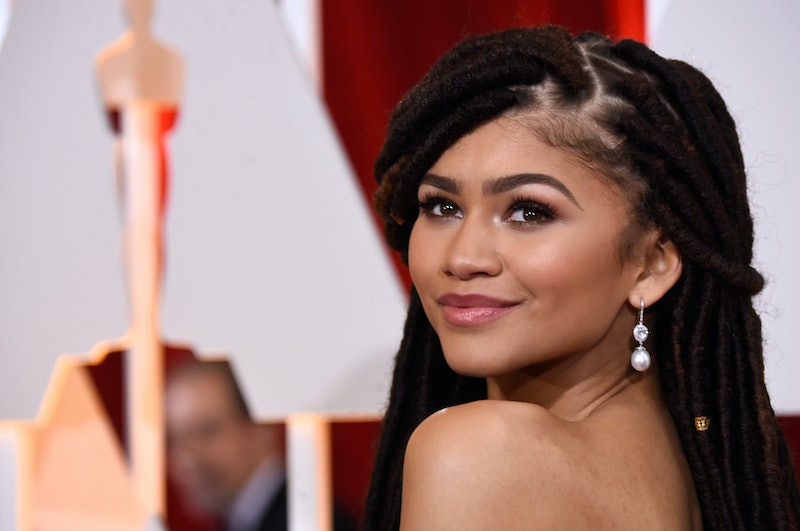 Zendaya has no time for your misogyny, Internet. Just a few days after the 18-year-old actress/singer/all-around badass schooled haters on the decision to go makeup-free (or not!), Zendaya once again called out blatant sexism by putting a Twitter account in its place after it tweeted a totally effed up meme about YouTuber and makeup goddess xoShaaan. Drag 'em, girl.

@Manstagram_, the Twitter handle that brings its 238,000 followers gems such as this total BS and constantly refers to women as "bitches", recently tweeted one incredibly sexist meme of makeup artist Shannon Harris. The image included two photos of the 20-year-old YouTube sensation: One of her in full makeup, and the other completely makeup-free. @Manstagram_, in its attempt to be ~hilarious~ (aka appealing to an audience with the maturity of a middle-schooler), captioned the pics: "This is why our first date is running around the track to see if you sweat the makeup off." And this is why our first date is putting you in the "literally do not open your mouth unless its an apology for your horrific attitude" pile.

Since Zendaya's positivity and radiance knows no bounds, she was obviously having none of this and decided to take a stand, shutting down the haters with a simple photo, caption, and rhetorical question:

GUYS, ZENDAYA LITERALLY JUST CREATED AN INSTAGRAM VIDEO TRYING TO END THE HATE ABOUT SHAMING WOMEN FOR THEIR MAKEUP CHOICES. Are we really going there again? The shaming may not be surprising, but neither is the "Replay" singer's epic reaction. If her badass feminist ways put her even more in the spotlight, then yeah, I'm all for it. And so is Shannon Harris, who thanked Zendaya for standing up for her and for all women: