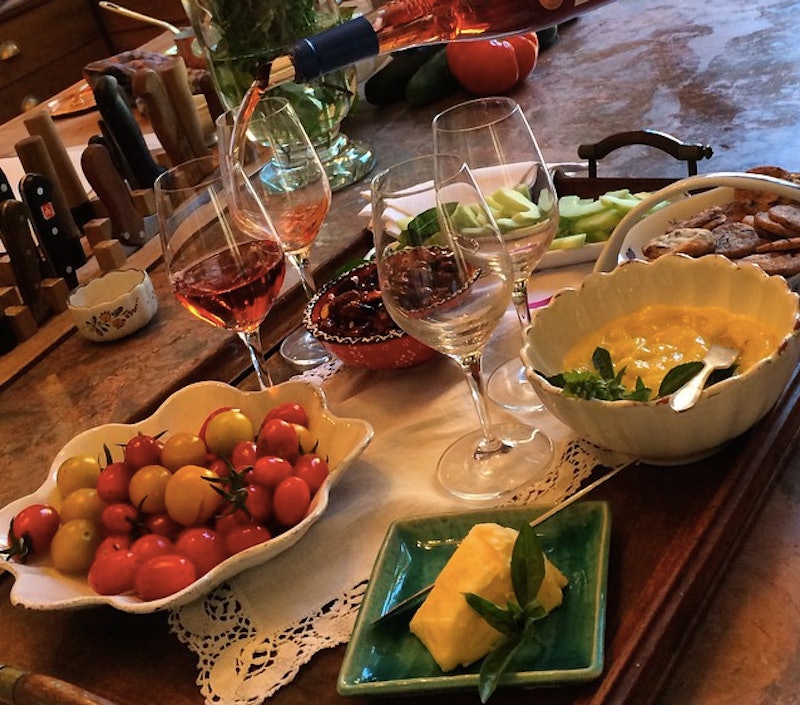 As an American woman, I sometimes feel like French women have it all, from their effortlessly chic fashion sense to their seemingly innate ability to enjoy all of life's little moments. And on top of all this, French women get to eat French food all of the time, which really makes it seem like they're gaming the system, because French food is undeniably and unquestionably delicious. (Have you ever had a fresh croissant in Paris? If not, get on a plane now because it is a life-changing experience.)

The average French meal includes multiple courses, including a cheese platter, and each dish is paired with a complimentary wine. All this seems like it a lot of effort for a single meal and begs the question: How do French women do it? What superpower do French women have that allows them to always look perfectly polished and have a family and still put these decadent meals together at the drop of a hat? And maybe most importantly, how can I, an American woman, learn to be as effortlessly chic too?

Enter Susan Hermann Loomis, whose new book In A French Kitchen: Tales and Traditions of Everyday Home Cooking in France reveals the everyday secrets of the French woman, and that it's really much easier than the French would have you imagine. There's perhaps as much crème fraîche and butter as you might imagine, but there are also some surprises, like the French cook's love of using leftovers or the French home's lack of light-filled, large kitchens. The book also includes more than eighty recipes for you to try in your own kitchen so you can see what it's like to cook like a French woman.

According to Loomis, "Cooking like the French, in a French kitchen, is the shortest route to happiness, warmth, pleasure, and delicious times!" So if you want in on the fun and the joy, here are 13 tips to help you learn to cook and eat as effortlessly as a French woman:

Many of the women Loomis turned to for the best recipes simultaneously complained about cooking. Fabienne, for example, is "thin as a rail, and while she loves to eat, she openly complains about having to cook. 'Ah, non, Susan, I don't really like to cook... But I don't want to eat just anything.'" French women make time to cook because they love to eat, and cooking at home "is simply the straightest path to a delicious, warming moment at the table."

It's not like these French women spend all day slaving away in the kitchen. They have their own lives, far from the stoves. But the French cook is always organized, and "this sense of organization, which is drummed into the French student from first grade onward" creates a cook who is always prepared. This organization, which can range from spreadsheets to keeping favorite ingredients in the pantry, "takes much of the anxiety out of cooking."

Sit Down When You Eat

Loomis tells the story of her friend François Olivier, a cheesemaker, who told her, "If ever my grandfather caught me eating while standing, he would look at me and say, 'You wouldn't fill the gas tank of your car while the motor is running, would you? Sit down and take the time to eat.'" This, Loomis remarks, "is excellent wisdom."

In Loomis's small town, there are four independently owned bakeries. She goes to the farmers' market every weekend, and knows the vegetable salesman, the cheesemonger, and the butcher by name. Although there are supermarkets, "Sixty percent of the French buy their groceries at the farmers' market or at the épicerie fine," or the small, local grocery store because, "They all agree... that intimacy among the produce makes for better meals and, quite simply, a better life."

French refrigerators, in Loomis's experience, are shockingly bare, especially compared to overflowing American ones. There's usually little more than some cheese, some bacon, some crème fraîche, and a couple bottles of wine. This is because the French view the fridge as "a holding area rather than a storage bin." Fresh ingredients should be used soon after purchase, not left to sit in fridges.

Make Your Own Mayo

Part of the reason French fridges are so bare is because a lot of the "staples" American cooks consider to be too difficult to make at home are made from scratch in the French home. A perfect example of this is mayonnaise, which, "in the hands of most French cooks," writes Loomis, "is child's play." When you can make something at home, like mayo, it's usually fresher and more flavorful than what you'd buy at the supermarket, so look for these small substitutions and make these simple things yourself.

"Green salad is fundamental to the French meal," explains Loomis, "so much so that it is often taken for granted, like the fork or the wineglass." But unlike American meals, when the salad usually comes as an appetizer, the green salad is served after the main course. "Some say it's a palate refresher. Others claim that the vinegar helps transition from salty to sweet; still others insist that the greenery helps digestion." No matter what the reason, make sure you never cut lettuce on a plate with your knife; "If you are served a salad that includes large lettuce leaves (not good), you can fold them with knife and fork into a packet that will fit into your mouth."

The French love their sweets, but unlike Americans, "there isn't a shred of guilt associated with it." There is always a dessert with dinner, and often something sugary for an afternoon snack, also called a goûter. Dessert can range from plain yogurt with sugar or something freshly baked, like a cake or a tart. No matter what it is, sugar is always there, so if you're eating like a French woman, embrace that sweet tooth.

Like the salad, the cheese course comes after the main course, and a good cheese platter, in Loomis's experience, has no more than five different varieties. She recommends one soft goat cheese, one Camembert-style cheese, two hard cheeses, and one blue cheese. This cheese usually served with bread, and always served after the main course, reportedly to aid digestion.

Breakfast is considered to be just as important as lunch or dinner in French culture, and is treated with the same reverence and respect. "It's about waking up, a quick but rich moment to gently emerge into the day, fueled by coffee and chocolate, toasted bread, and the luxury of butter and jam."

But Croissants Are for Weekends

Contrary to popular belief, an everyday French breakfast isn't a croissant. "Croissants are considered special, and they're also the original fast food–you eat them for special occasions and for those desperate moments when you're starving and there wasn't time to make toast." Croissants are for when you have time to relax and to savor, like the weekend.

"Saucing" is when, after finishing a dish, you take a piece of bread and use it to sop up all of the excess liquid at the bottom of the bowl. This action is considered impolite, "an insult to the hostess, because it implies there wasn't enough food on the place. It is the American equivalent to licking a plate." But really,everyone likes to sauce in France, so if you are going to do it in public, "at least put the bread on your fork and take a little sauce, but not all of it."

Be a Confident Cook

The biggest difference between American and French cooks, in Loomis's opinion, is, "Confidence, something all French cooks have in abundance." It's that confidence that allows cooks to tackle seemingly complicated recipes and techniques, from making mayonnaise to whipping together a tart at the last minute, with aplomb. If you're trying to cook like a French woman, be confident that you can cook like a French woman, and I promise your recipe will turn out OK.

More like this
16 Novels That Paint A Realistic Portrait Of Abortion
By K.W. Colyard
Aesop's Queer Library Is Open
By Tomi Otekunrin
20 Genius Kitchen Storage Solutions For Decluttering Your Space
By Emma Garza
This TikTok Hard Seltzer Hack Involves A Milk Frother
By Alexis Morillo
Get Even More From Bustle — Sign Up For The Newsletter