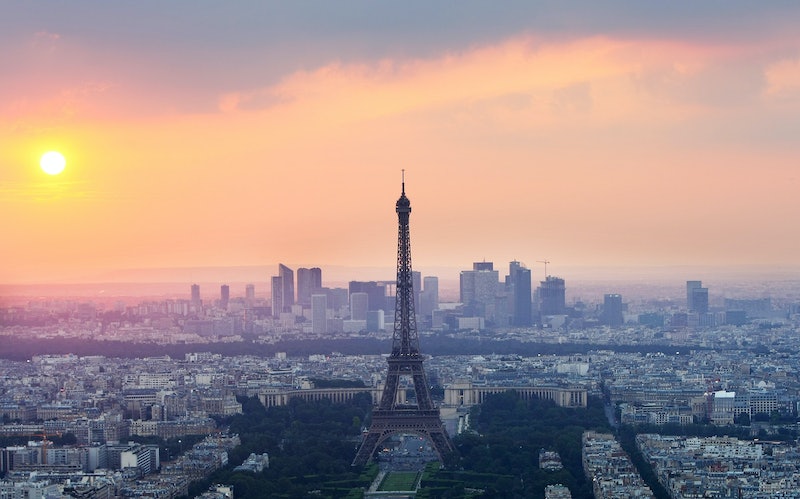 The winter of my junior year in college, I was lucky enough to spend two weeks studying abroad in Paris so that I could study the fine art of dessert – er, architecture. I'd never studied abroad before, so I left the United States bright-eyed and bushy-tailed, armed with a Parisian guide book and a hundred things I probably didn't need to pack, ready to eat (I mean learn) everything I could in a short amount of time. I knew how to say "Hello" and "May I please have a baguette?" which is all anybody really needs to know to survive in any foreign language speaking country, as far as I'm concerned.

I spent those two amazing weeks people-watching, making friends with other travelers, and wandering aimlessly around city streets until my feet were numb from the cold. For anyone who is considering studying abroad and is afraid to take the plunge, I cannot stress enough how life-altering the experience is, even in the amount your perspective of the world can change in half a month. I was lucky enough to have the kind of professor who was so engaged in the subject material that he could spout off entire histories of blocks everywhere we went, but even if you don't have someone like that as you're guide, it won't matter. The entire atmosphere of a foreign city is unlike anything you'll ever experience at home. As you can imagine, I missed Paris just about as soon as I hopped on the plane back home, and there are some parts of it I'll miss until the day I manage to make it back:

Any croissant that you eat in Paris will be 600% more delicious than the best croissant you ever ate in America. Their croissants transcend carbohydrates. Even the cheap hostel we stayed at served croissants for breakfast that were worthy of having entire songs – nay, entire albums – written to sing their praise.

Casually Strolling Past The Eiffel Tower All The Time

By your second or third day in the city, you'll pretend it's no big thing even though inside you're still screaming, "THERE IT IS! THERE IT IS!" And all bets are off if it happens to light up as you're passing it. One of the most surreal memories I have of Paris was the coming out of a tunnel in the metro just in time to see it start to flicker at night in the distance.

Even if you have no idea what they're saying, it's more beautiful than anything that's ever come out of any mouth you've listened to before. We went and saw Mamma Mia and didn't catch two words of it, but it was like a feast for the ears.

THEIR LITTLE VOICES. OH MY GOODNESS. A little boy told me in French that my bag was unzipped and thought I didn't understand him, but the truth was I looked so gobsmacked because he was so precious that my heart stopped beating.

The Pride Of Successfully Communicating

I had just enough French under my belt that I could navigate solo if I wanted to break off from the group, and every time someone understood me, I was preening like a puppy that had just been potty-trained. I'd heard all these rumors that French people hated American tourists, but they were actually incredibly receptive to tourists at least attempting to speak the language.

Walking Along The Seine Like You're In An Adele Music Video

And possibly singing "On My Own" from Les Miserables to myself. There is a reason there are so many songs and works of art centered around the Seine, and it's because it's a river of dreams.

Naf Naf is a French clothing shop that is like a slightly more upscale Forever 21 or H&M. Also it has a name that sounds like a duck quacking, and I have the maturity of a 5-year-old.

Paris is the only place I've ever been that three out of five times you turn the corner, you'll run smack into one of the most beautiful cathedrals or works of architecture you've ever seen in your life. It's lucky that Parisians seem used to tourists stopping dumbly in the middle of the sidewalk and have learned to navigate around us.

The Ease Of Public Transportation

How is it that I don't even speak French and yet their metro made more sense in five minutes than the metro in DC did in ten years?! I never worried about getting anywhere I want to go because Parisians have mastered the art of explaining things to the directionally challenged (ie, me.)

People Casually Drinking Wherever They Want

If you try to camp out in a public park at lunch and drink from an enormous bottle of wine when you're 20 years old in the U.S., you'll be arrested in approximately eight seconds. If you do it in Paris, nobody bats an eye.

The Air Of Romance Everywhere

All the clichés you've heard about romance in Paris are true. The iconic love lock bridge that tells a thousand stories, the happy couples walking hand in hand, the beautiful art from street vendors depicting Paris in all different shades of sunsets and sunrises. You breathe the air there and you just can't help but think there's something magical in it.

More like this
Expert-Approved Hacks For Packing A Carry On
By Jessica Goodman
Where Was 'The Bachelorette' Season 19 Filmed? More European Destinations Are On The Way
By Radhika Menon
I Tried Float Therapy In Iceland's Blue Lagoon — Here's My Honest Review
By Alexandra Owens
20 Things You Should Never Tolerate In A Relationship
By Rachel Sanoff and Kathleen Ferraro
Get Even More From Bustle — Sign Up For The Newsletter