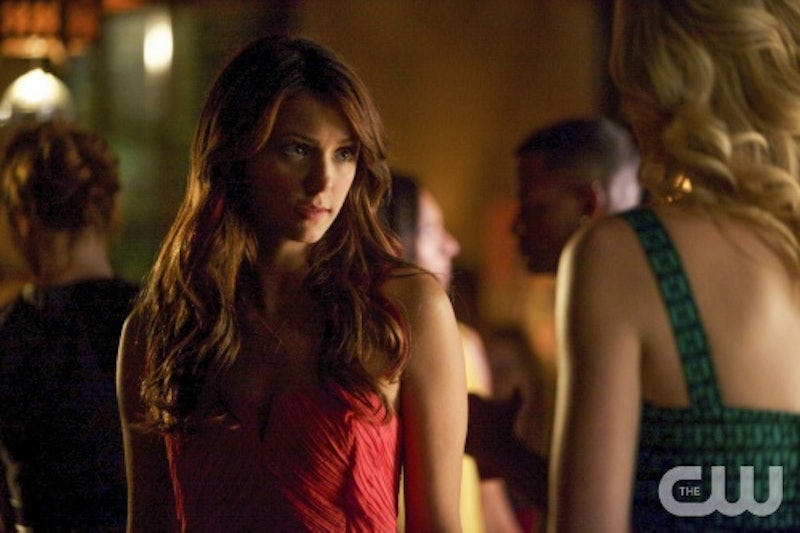 So, all of the new Mystic Falls villains are dead. Thursday night's episode of The Vampire Diaries finally rid us of the epic and unparalleled amount of craziness exuded by Silas, Qetsiyah and wacky, "I can hear the dead," Amara. (Thank god.) We also got some pretty great death scenes and a happy(-ish?) ending for Bonnie, Jeremy, and the rest of the Mystic Falls gang. Congratulations on the tying up of multiple loose ends in one episode, TVD! Now, we can finally get some answers about Whitmore College and focus on Katherine turning into a 2,000-year-old corpse?

Silas and Amara, the world's first lovebirds finally reunited and in a moment of love and passion, acted on their overwhelming will to die. Which is actually kind of sad because Silas was starting to grow on me. He wasn't the best villain ever, but Thursday night's episode opened on him sharing his ridiculous epic love story with a couple of unsuspecting travelers. He basically sounded like he was both drunk and wackier than a bullfrog, but it was actually really funny. Silas had some great one-liners in his time on TVD, he'll surely be missed.

Back to Silas and Amara, who are both finally dead but, here's the twist, not together in the afterlife. Silas, while in the midst of tormenting Qetsiyah, finds out that Stefan had Amara in the woods outside of the Salvatore mansion and runs to her. She pleads with him to kill her, saying that she loves him but just can't bear to live anymore, he cries, and then pulls out a dagger and begins to cut her throat (how humane to put her out of her misery) when suddenly Stefan returns, and ends up killing Silas with his own dagger. Happy Romeo & Juliet moment, everyone! Amara watches Silas die and then pulls the knife from him and stabs herself with it, ensuring that their "eternity is just beginning." How romantic, except you're not going to the same place. Oops.

Bonnie, on the other hand, got a pseudo-happy ending in that she now gets to actually be alive as the new "anchor," but she'll probably be driven mad by the voices and pain of dead supernatural beings constantly passing through her to get to the Other Side. Seem like a fair trade off? I don't really think so, considering how the last three minutes of the episode was Bonnie screaming and writhing in pain as Qetsiyah passed through her to meet Silas. (Yes, Qetsiyah also killed herself because she realized that she could torture Silas for eternity in supernatural purgatory.)

All things considered, the show's viewers definitely won last night. We lost two of the confusing doppelgängers and are now back to the original Elena/Katherine scenario. (Even though Paul Wesley and Nina Dobrev were KILLING IT as playing multiple characters at once, especially during the Silas-death scene.) And the show got rid of crazy-witch Qetsiyah because she was just too bogged down by hate and love issues. Also, Bonnie's officially back (yay!) so now we can stop listening to everyone whine about her and instead watch them serve penance to Stefan who finally acknowledged that he was hurt that everyone forgot about him while he was drowning in the safe.

We're finally back to an unconvoluted square-one where anything's possible (like the show returning to its former glory), yay Vampire Diaries!