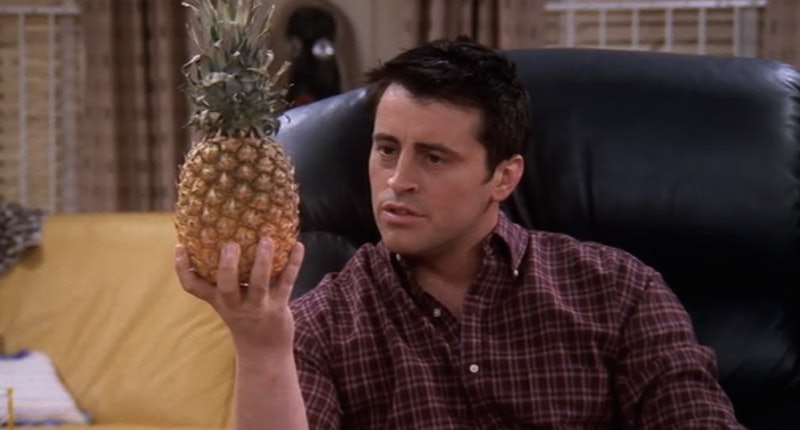 For all the things that Friends gets right about life in your 20s, there is one thing any serious gormandizer can relate to: Joey Tribbiani's love of food. Though the sitcom's resident Lothario couldn't keep a stable romantic relationship for long, his devotion to sandwiches, pizza, and turkey were constant and forever. In a way, that makes Joey the most relatable character on Friends — he was forever prioritizing his stomach before his heart.

OK, maybe that's jumping to conclusions really quickly. It's plausible that you hate pizza (and, by extension, fun) and don't really understand Joey's obsession. But, if you're one of the many who will always choose delicious food over romance, you've likely nodded in solidarity every time Joey expressed his desire to eat until he couldn't feel his face. In fact, you've probably marathoned every episode of Friends twice by now, and while doing so, you probably gobbled down at least two snacks per episode. "Mary Grace, I can't find those bags of Doritos I bought for the party, are you marathoning Friends again?" CAN I LIVE, Mom?! God...

In any case, let's celebrate the greatest love story Friends has to offer — one that makes Ross and Rachel look absolutely pointless. Yes, let's revisit Joey's finest moments with food.

1. When He Bravely Ate Rachel's Thanksgiving Trifle Without What Should've Been Heaps Of Disgust

Most sane human beings would reject Rachel's Thanksgiving trifle, but Joey kept an open stomach about it. It's the perfect mix of custard, jam, and meat. You may not be THAT desperate, per se, but you've embraced some strange foods when your stomach's a-rumbling.

2. When He Wanted To Make Sure That Ross's Newest Failed Marriage Wouldn't Get In The Way Of Dessert

I mean, if Ross gets another divorce it's no big deal — but if you're anything like Joey, you just always want to double check that that wedding cake isn't in jeopardy. Likewise, you were sad when your bestie and her boyfriend had major fight at your last birthday, but NO WAY were you going to call it in early and forgo cutting the cake.

3. When He Shared His Simple And Smart Philosophy On Sharing Food... Which Is, That He Doesn't

Some couples are so cutesy in the way that they feed each other. Joey isn't about that life, and neither are you. A date who dares to touch your fries? That's a deal breaker.

4. When He Decided To Dress For Success

When you know you have an edible Mount Everest ahead of you, you don't put on a bodycon dress. Likewise, Joey had Phoebe's pregnancy pants at the ready when he had to a tackle a turkey head-on. And lemme tell you, kids — a 19-pound turkey is way heavier than an eight pound baby.

5. When He — Like A Boy Scout — Was Always Prepared

Who can forget when that time Chandler dropped some delicious cheesecake on the floor, only for him and Rachel to go at it with a vengeance? Seasoned Friends fans will remember that, shortly after, Joey arrived, saw food, and pulled out his emergency fork from his jacket to join in — not even giving a damn what the food was. That is you, and me, and all free food.

6. When He Knew How To Problem Solve

Step 1: Eat everything in your broken fridge. Step 2: Ask Chandler to pay for a new one. You, likewise, were kind enough to finish your friend's cheese fries when she drunkenly passed out a diner at 3 a.m. You and Joey are both humanitarians in that way.

7. When He Was Willing To Risk His Life For A Sandwich

Let's face it, if you had to choose between second-tier friend and a sandwich... well, you know what one you would pick.