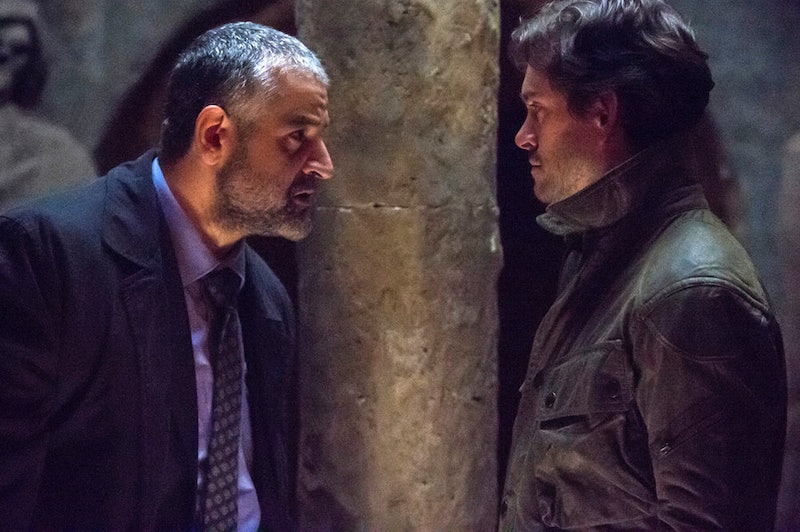 The Season 3 premiere of Hannibal may have seemed like an isolated episode, but it served as a reminder that the NBC series is about its title character at the end of the day. Instead of our regular pseudo-procedural, we were treated to Hannibal and Bedelia's horrifying adventures in France. However, Will Graham will return this week, and joining him is a new character to Hannibal for Season 3 , Inspector Rinaldo Pazzi.

If you're a fan of Thomas Harris' Red Dragon books that inspired the series, you're already familiar with this name. In the novels, Rinaldo Pazzi is working with Mason Verger, and [book spoiler] is ultimately killed by Dr. Lecter himself. He is also a major character in the 2001 film Hannibal. Considering Will Graham's not-so-great relationship with Verger in Bryan Fuller's adaptation, this could cause conflict if it's also the case.

However, we're meeting Inspector Pazzi fresh on the Hannibal series, so anything can happen. According to NBC's official description of the upcoming episode "Primavera,"

"Will's arrival [in Florence, Italy] draws suspicion from Inspector Rinaldo Pazzi who twenty years earlier pursued a Florentine killer known as 'Il Mostro' and, after reading Will's file, believes that Hannibal Lecter and 'Il Mostro' are one and the same. Pazzi tries to enlist Will's help in catching Hannibal, but Will warns that he is unsure of where his own allegiance lies."

That's good of Will to let others know that he can't be trusted. However, can Pazzi be trusted? I haven't even met the guy yet, but I'm going to go with a big fat "no" here. He's either working for Verger, like he was in the novel, or was placed in Italy to throw off Will. I am reminded of Bedelia Du Marier's warning to Jack Crawford that all of this is still going according to Hannibal's theatrical master plan. You're going to have to work hard to make me believe that Will Graham just happens upon someone in Italy who is also searching for Hannibal Lecter. It's hard enough deciphering what's real and what's imaginary on Hannibal.

Frankly, I'm more excited about Chiyoh, Will's other ally (pictured above) who will debut in the third episode of the season. Chiyoh used to work for Hannibal's Aunt Murasaki — it's strange to think of Hannibal Lecter having a family, isn't it? I like to believe that he came into this world fully formed, dressed in a plastic person suit and with cannibalism puns and innuendo at the ready. Someone from his past, like Chiyoh, will be a juicy addition to Hannibal's new season.

It'll be good to see Will Graham up and at them on Hannibal once again. I'm also enjoying the European tour that Season 3 is fast becoming. However, I'm remaining as wary of this Inspector fellow as I am of Bedelia's motives in following (and marrying ????) Hannibal Lecter. In the books/film, Pazzi is clever, but also ruthless. Not exactly the sort of person that those of us worried about Will Graham want him to team up with on Hannibal.