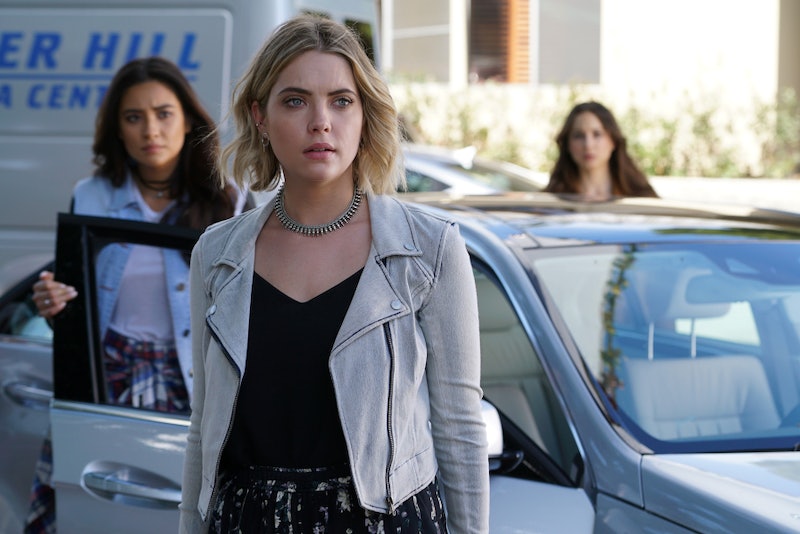 Pretty Little Liars has had plenty of dark moments over the course of its previous seasons, but Season 6 has already cranked up the show's disturb-o-meter to an 11. In the second episode of Season 6, titled "Songs Of Innocence," we learned exactly how Charles DiLaurentis (aka Big A) tortured the girls in the dollhouse — and to say that the details are awful would be an understatement. Apparently, Charles tortured Emily, Hanna, Spencer and Aria by doing the unthinkable: making them hurt one another. As Hanna tearfully told her mother, Charles played "lots and lots of games" with the girls, which forced them to choose things like which friend deserved to have water withheld, or undergo an electric shock. It's an absolutely horrific thing for the girls have gone through — but, could it be that their torture might actually give them a clue to A's identity? Specifically: Could A's method of torture hint that he's in the medical profession?

If you've taken a psychology class, you may have heard about the controversial Milgram experiment, which tested obedience to authority versus one's personal conscience. The method in which Milgram and his group performed this test was by having a "test subject" (really someone working with the group) sit on one side of a wall, with the subject answering a series of questions for a participant on the other side. If the subject did not answer correctly, one of the researchers running the exam would pressure the participant to deliver a shock to the subject. Though the shock was not real, the participants did not know that, and many felt incredible guilt for choosing to hurt someone. Just like with The Liars, the real "torture" didn't come from the shock, but from having to cause pain to another.

Torture may not have been the point of the Milgram experiment, but Charles could have been inspired by it nonetheless. There are a lot of ways to torture people, and it's interesting that this is the method that Charles chose. After all, Charles could have forced the girls into shackles and shocked them whenever he pleased, but instead, he wanted the girls to suffer in this specific way — almost as if he had read about it in a textbook and liked the thought of what might happen if he did the experiment for real. In my mind, there's only one person with enough knowledge of psychology to meticulously plan a highly psychologically damaging experiment on the girls...

Yes, a lot of people could want to hurt the girls, but Wren's background in mental health definitely raises a few red flags. Not only is Wren a doctor at Radley Sanitarium, but his primary focus is on patients suffering from mental illness. It's not just his work at Radley that seems suspicious: Wren has also talked about having a family member suffer from mental illness and trying to help them.

Personally, I can't help but think that this is just another sign that points right back to Wren being Charles. As any true Pretty Little Liars fan will tell you, there are plenty of reasons to be suspicious of the good doctor — and Charles' torture method could be just one more.

For more on "Songs of Innocence," check out Bustle's Pretty Little Liars podcast below.

More like this
Hayden Panettiere Admits "Addiction" To Alcohol & Opioids Before Going Sober
By Jake Viswanath
6 Mind-Blowing Fan Theories About How Stranger Things Will End
By Kadin Burnett
Why Sadie Sink Is Hopeful Max Will Return In Stranger Things Season 5
By Brad Witter
The Star Of 'Ms. Marvel' Has A Legendary Letterboxd
By Gretchen Smail
Get Even More From Bustle — Sign Up For The Newsletter