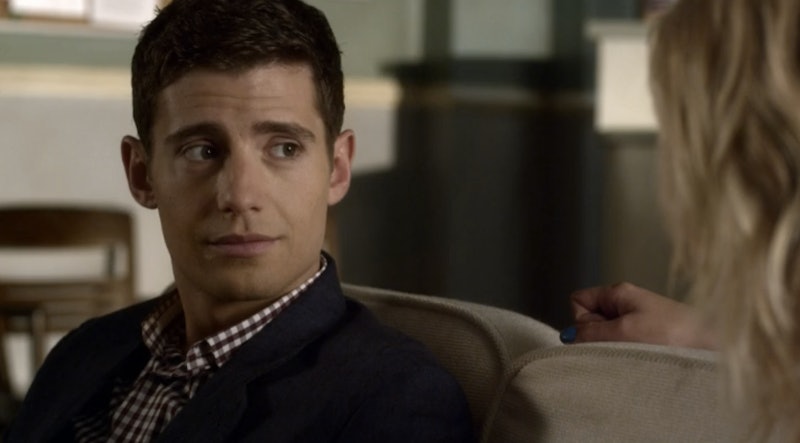 Only one week may have passed since Pretty Little Liars revealed that Charles DiLaurentis is Big A, but already fans have come up with a ton of suspects for the man behind the mask. Once it was revealed that Charles is definitely someone we've met before, the speculation only grew. One theory points to Wren Kingston as Charles, and though it may sound a little crazy at first, many fans have added their own observations and predictions into the mix, crafting a very plausible possible backstory.

Wren has long been a Big A suspect, and this Charles reveal doesn't actually invalidate those original theories. First, a brief refresher on why so many fans (myself included) believed Wren could be Big A. Alloy Entertainment compiled a list of 40 (yes, 40) clues that prove Wren is A, and the key points include his aggressive romantic pursuit of both Spencer and Hanna, his connection to Radley, the access granted to him as a doctor, his propensity for board shorts and organization, and his overall sketchy ability to show up wherever the Liars happen to be. All of that still applies. There's only thing that needs to change about Charles for Wren to be his alter ego: he can't be Jason's twin. All these clues are only leading us to theorize nonstop about PLL's future, like we do in our podcast, "Taking This One To The Grave":

After the Season 5 finale, it was widely assumed that the video Spencer found in the dollhouse showed Mrs. DiLaurentis talking to her twin sons, while holding her infant daughter. However, it's definitely possible that the two boys weren't actually twins, but just brothers. PLL reveals always come with even more questions, so we can't be too sure of what exactly was happening in that video. This is so important to the Wren-is-Charles theory because, in addition to being engaged to Melissa and recently rekindling that relationship, Wren kissed and showed romantic interest in Spencer. If Charles is Jason's twin, that would make make him Melissa and Spencer's half-brother, and I don't think PLL is about to go there. These clues are also described in the video below.

Now that we've moved past the twin issue, let's get back to signs that Wren is Charles. First off, how would this work? There are a few different theories floating out there, but my idea is pretty simple: Wren was born as Charles DiLaurentis, but sent away some time after the video was taken. He could still be Mr. DiLaurentis' son, but after some event (maybe an attack on one of his siblings, as suggested by that infamous Halloween twin tale), had to be sent away. At that point, he was either a) adopted by a British family or sent to a British institution, or b) sent to Radley, where he gave himself a new identity and accent to support it. It certainly wouldn't be the craziest thing to happen on PLL.

Before you accuse me of just being too stuck on the Wren-is-A theory, there were actually a few clues in "Welcome To The Dollhouse" that pointed to him being Charles. For starters, remember that drawing Wren was seen coloring in Season 4? At that time, many fans took it to mean he knew Red Coat, but Tumblr user wrenischarles has a different theory: Wren is making the picture match the home video. Mrs. DiLaurentis is wearing a pink-ish red sweater at Campbell Farm, and the drawing depicts a happy family at a farm, with the mother wearing red.

Oh, there's more. Tumblr user ladyholidaay noticed a poster that read "Love Thy Neighbor" in Charles' dollhouse, and realized that it was extremely similar to a poster seen in Wren's apartment earlier in the series. And while we're on the subject of suspicious home decor, wrenischarles also made an interesting discovery — a silver A propped up on a dresser in Wren and Melissa's London apartment, where Spencer stayed for a few days in Season 5.

I. Marlene King may have even given us a clue that Wren is Charles, thanks to a seemingly innocent Instagram post that has fueled a ton of speculation. Be sure to read the caption in her post, below.

Of course, she's referencing the old adage, "an apple a day keeps the doctor away." Who's allegedly a doctor on PLL? Wren.

And there's one more clue from the finale that points to Wren, which just so happens to be one of the most heart-wrenching moments of the entire episode. In Season 3, Wren developed feelings for Hanna. They kissed once while Hanna and Caleb were broken up, but as soon as they got back together, Hanna made it clear she was not interested in Wren. He was not happy about that. He continued to ask her out, and the last time we actually saw Wren (as far as we know), he was glowering at the happily kissing couple from his car. The plltheories Tumblr even posits that Wren was the other person wearing the Phantom of the Opera costume on the ghost train in "This Is A Dark Ride," tricking Hanna into believing he was Caleb to get closer to her.

So how does this connect to an emotional moment from the finale? It all comes down to a game of Mystery Date. In the dollhouse, the Liars were forced to play the game, and when Hanna lifted a door on its board to find a photo of Caleb, Emily realized that the girls were playing to find out who their dates to Charles' creepy prom would be. Hanna was not OK with that.

We never saw Charles actually attempt to get any of the Liars' significant others to the dollhouse, so in all likelihood, the game was just meant to mess with their heads. And we all know A/Charles has gone after Hanna and Caleb on more than one occasion. Who's more likely to use Caleb as a tool to torture Hanna than someone who's shown serious opposition to their relationship in the past?

This might not conclusively prove that Wren is an alias for Charles, but this is PLL. Until Charles finally takes off that mask, we have no way of determining his identity with certainty. These clues and theories all just prove one thing: Wren is still a prime Big A suspect. The blocks in Spencer's room don't need to spell out Wren Kingston for him to end up being the person responsible for five seasons of torture. For more Charles theories, includng one with the PLL book writer herself, check out Bustle's Pretty Little Liars podcast below.