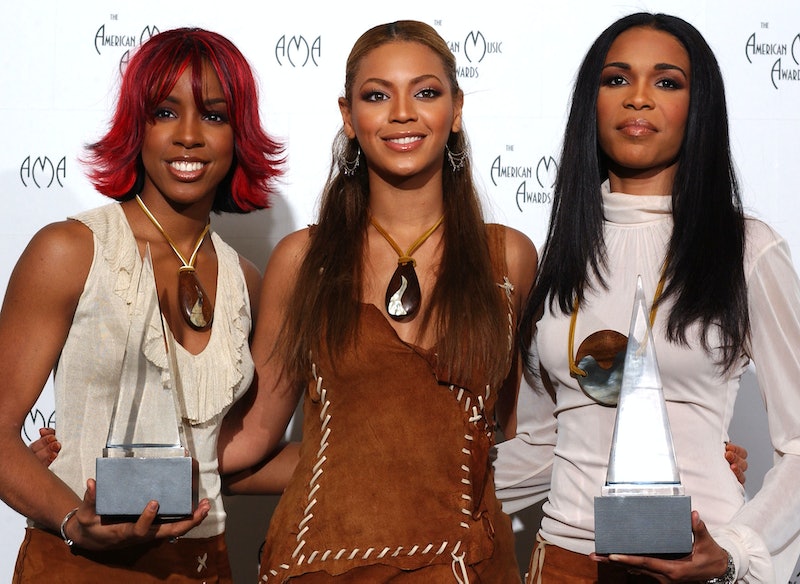 As someone who considers herself a total connoisseur of all things Destiny's Child, I'm always down to grab dinner and drinks to reminisce over every single detail from the pop group's heyday, back when a pre-Sasha Fierce Beyoncé was being groomed to run the world. That forever relevant conversation would then be followed by a marathon viewing session of some of Destiny's Child hottest music videos. After several winded, sweaty attempts at performing choreography from the "Lose My Breath" video, the discussion would inevitably segue into an important question: why the ladies of DC3 went their separate ways in 2005.

I mean, didn't they almost have it all? Even the late, great Whitney Houston told Destiny's Child to stay together, but did they listen? Obviously, they did not. (Because they're independent women, remember?) So that still leaves the question that thrives on conspiracy theories and the leftover tears of distraught DC3 fans who would still love to see the group reunite: Why did Destiny's Child break up?

Was it because they were finally too mature to be shaking their collective jelly on stage in a series of horribly coordinated outfits, even if they were hand-stitched by Beyoncé's mom? Nope, that couldn't be it, because they actually experimented with the grown and sexy look before the split. Clearly, there's more to this story than DC3 simply outgrowing their image.

So, here's where things get a little complicated. Technically, Destiny's Child didn't break up — they disbanded. Honestly, the phrase breaking up is way too harsh to describe what happened with DC3. Instead of dissing one another in a flurry of shady text messages, eye rolls and nasty cat fights, they simply decided that their destiny had been fulfilled and said as much in a heartfelt statement to their fans, which read in part, "After all these wonderful years working together, we realized that now is the time to pursue our personal goals and solo efforts in earnest. … No matter what happens, we will always love each other as friends and sisters and will always support each other as artists."

Obviously, some people choose to go with less warm and fuzzy versions of DC3's not-really-a-breakup breakup. One popular theory was that Beyoncé's successful solo career brought about the group's demise, but you should seriously reconsider saying that to a Beyoncé fan because — just don't.

Besides, the ladies' statement sounds so much sweeter than the "Nice knowin' ya, bye!" sentiment implied by referring to their professional parting of the ways as "breaking up." In other (nicer) words, it was the perfect time for each of the ladies to embrace their transition into more mature territory, personally and professionally. Nothing more, nothing less.