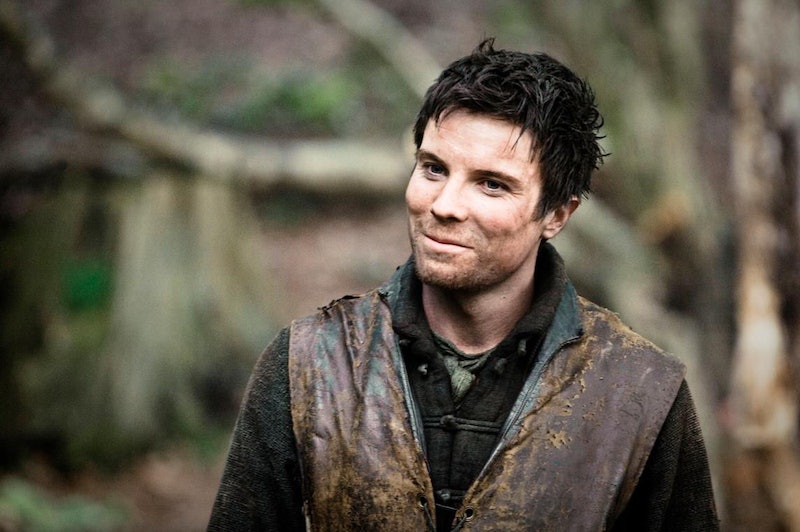 Oh, Gendry. Wherefore art thou, Gendry? Do you realize we haven't seen him on Game of Thrones for almost two seasons now? Last we saw him, it was Season 3. That's like a thousand years in Game of Thrones time. But, just because we haven't seen him recently doesn't mean he's still not important to the story. Wherever Gendry is, he's got Baratheon blood, and that's pretty important. It's anyone's guess if he's still alive on the show, and if we'll even see him again. But, looking to A Song of Ice and Fire, does Gendry die in the Game of Thrones books? Perhaps from there we can gain some clues as to his show fate.

You more than likely have not recovered from last week's Game of Thrones episode, "A Dance With Dragons." Don't worry, I haven't either. It'll probably take me until the start of next season to fully come to terms with what happened to Shireen. While her death sucks — and it really, really sucks — it didn't come without reason. Melisandre, the princess of evil, death, and darkness (not her real Game of Thrones characterization, but I think we can agree it's true), had a fiery vision and sacrificed Shireen for the good of the Lord of Light's cause. Tough stuff to swallow, but it's all because of Shireen's Baratheon blood, King's blood, that her dying meant anything to Melisandre. It happens to be same blood that Gendry has running through his veins, too.

So, if Melisandre is running around sacrificing those with Baratheon blood (can she, like, take Stannis out while she's at it?) does this mean we should worry about Gendry's life, too? There's actually hope for him, seeing as how he's still very much alive in the books. Phew. OK, still doesn't mean we'll see him again on the show, or that he be spared a horrible awful fate, but it's a little bit of hope, right?

Gendry's story in the books and his on the show are very similar, but they do differ a little bit. In both he's the bastard son of Robert, and in both he becomes a blacksmith apprentice, and befriends Arya, and we 'ship that. But TV Gendry is actually seduced by Melisandre, and then she puts a bunch of leeches on him to suck out that Baratheon blood, because that is a hot commodity. Gendry is tortured (because yes, I'm going to consider being seduced by Melisandre torture) because of his lineage, and lineage is the same reason Shireen is killed. That's just the show, though. In the books, neither one of these things happen. Clearly Game of Thrones is playing up the Baratheon blood, so that's something to keep in mind as we continue on our quest through Westeros. This blood is important.

In the book, Gendry actually just quietly disappears, becomes a knight, becomes a blacksmith, and later on saves Brienne. (So, that's something to look forward to, hopefully!) His last appearance is in A Feast for Crows, and it's when he saves Brienne from Rorge and his men. Gendry is also very much alive when A Feast for Crows ends, giving me hope that he'll pop up again in the books, or in the show.

But, knowing his blood, and how Melisandre has already tortured him once, I'll guess that if Gendry does show up again, he better watch his back. Game of Thrones is having a field day changing up character storylines, and that includes killing those that are still alive in the books. Just because Gendry's been spared on the page, it doesn't mean he'll fare the same way on TV. So, maybe it's for the best that we haven't seen him in awhile. It leaves more room to pretend he's the one person in Westeros to whom nothing bad is happening. Yep, let's stick with that.