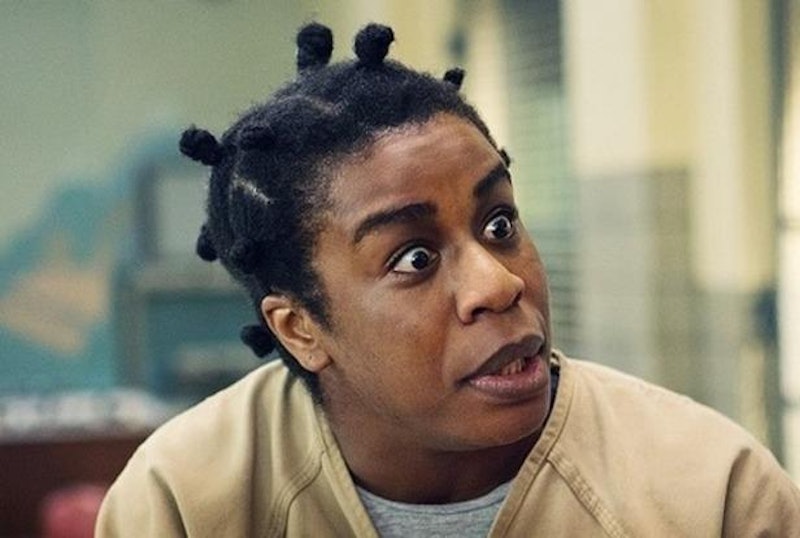 Clearly we've all been very, very good or racked up a lot of good karma lately, because Orange Is The New Black Season 3 has been released early, meaning all the show's devoted fans have lost a night of sleep. For those who maybe haven't been able to marathon, or who are mid-season and need a refresher, it might be a little useful to revisit some of our favorite characters. Suzanne Warren, aka Crazy Eyes, is one of my favorite characters on Orange Is The New Black. She is funny, has a strong moral core, and, like the rest of us, just wants to find her people and place in the world. But why is Crazy Eyes in prison to begin with?

The show is able to focus on a huge cast of characters, which is innovative and great, but can become a little confusing. Additionally, most of us watch the show in a hazy 48-hour period, only coming up for air when the season is over. While some characters' backstories are more clear, such as Sophia's and Red's, Suzanne's is a little hazy at this point. We know some of her history, in that she was raised by white parents in an environment in which she didn't fit in. Her mother cared about her deeply, but often pushed her to do things she didn't want to do, such as perform in front of an audience. Her childhood was fraught by bullying, and she experienced violent outbursts and mental health issues.

We haven't learned the reason for why Crazy Eyes is in prison, but it can easily be assumed that it was some kind of violent incident. Crazy Eyes quickly develops strong emotional connections to women, such as Piper and Vee. My guess for how she landed in prison is that she had some kind of attachment to someone, maybe even to her sister or mother, and that person was threatened in some way. Perhaps we'll never learn her exact backstory, but I'm not sure that we need to. The show doesn't have to explain everything. We know enough about the characters to understand where they're coming from emotionally without all the facts, and that is what makes Orange Is The New Black so great.