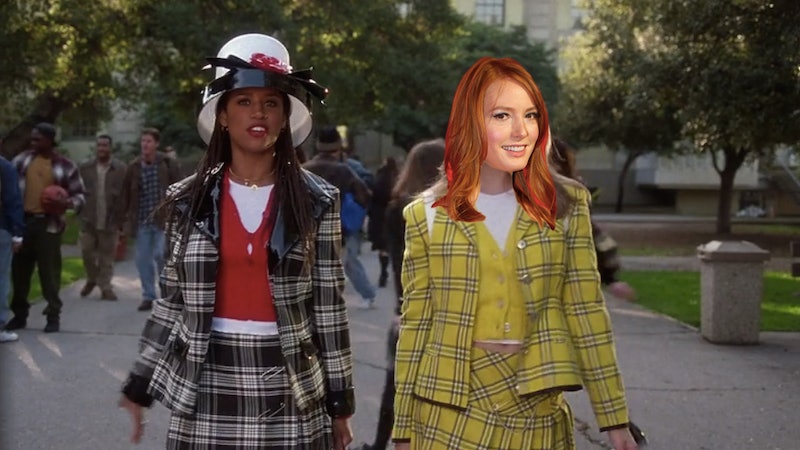 Arguably Alicia Silverstone's most iconic role — that is, her only notable role besides a bunch of Aerosmith videos and that tragic turn as Batgirl — is Clueless's matchmaking protagonist Cher Horowitz. So it's weird, nay, almost disheartening to find out in Vanity Fair's oral re-telling of Clueless that she was pushed into the background as other actresses were being considered for Cher. Hell, not even other girls. We're talking Angelina Jolie, Reese Witherspoon, and a handful of the ladies that would eventually become A-List celebs... for the most part. It makes you wonder what would Clueless be like with a different actress in the role of our "as if!"-spouting heroine?

Well, have no fear, I'll show you! Thanks to my wild imagination, and the amateur Photoshopping skills I picked up from two sad years in design school, I can properly envision at least six different takes on Clueless had Silverstone not made the cut. To say the least, I'm not sure it would've been considered a teen classic today if they took these directions.

So, yeah, I'm glad that ultimately the studio settled on Amy Heckerling's first pick, the lovely Silverstone. But, for a minute, let's quickly imagine a world where she didn't get cast, and they went with one of these ladies instead.

I hate to say it, but, although Witt is a multi-talented actress with covetable red hair, I really think that outfit needs to be complimented with blondeness, lest you tip into Amber territory. Do you prefer fashion victim or ensemble-y challenged?

I'm not having a hard time envisioning Jolie adopting Tai, nor am I finding it difficult to picture her giving a rousing speech about the Haitians. I think what throws me off is her chirping, "So, OK," right before said speech, and ending it with a twist of her chewing gum.

Oddly enough, this casting wouldn't have been much of a stretch; the following year, Paltrow played Emma Woodhouse, the very character Cher is based on. I am, however, glad we were spared hearing her tell Mr. Hall that she doesn't drink coffee, she only consumes miso soup and freshly picked avocados.

Oh please. Cher would've been a total Delta Nu sister in a few years, and Elle Woods would've taught Tai how to bend and snap. This could've worked with little complication.

I don't think it would be fair that Thiessen got to be the most popular girl at Bayside AND Beverly Hills High.

"Oh my god! I love Josh!" Cher said as her hair exploded into tendrils of excitement.

More like this
Alicia Silverstone Has Recreated An Iconic 'Clueless' Scene
By Frances Stewart
Kimberly J. Brown & Daniel Kountz Looked Back On Their ‘Halloweentown’ Romance
By Stephanie Topacio Long
All The Sneaky Lindsay Lohan Movie Easter Eggs In Her New Ad, Explained
By Stephanie Topacio Long
The 'Hocus Pocus' Sequel Finally Has A Release Date & It Makes Total Sense
By Shannon Barbour and Radhika Menon
Get Even More From Bustle — Sign Up For The Newsletter