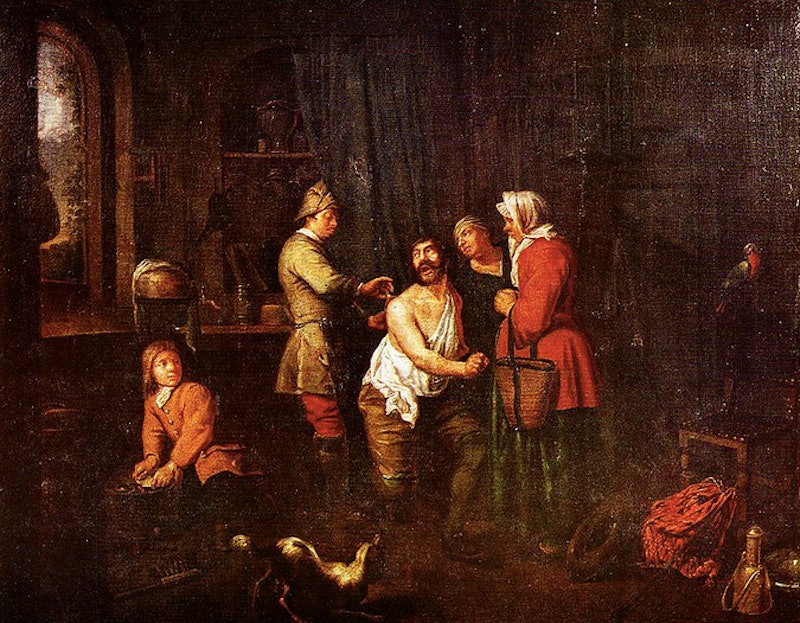 As a supremely lucky person who has a squeaky enough health record and only minor history with Grey's Anatomy , I gotta admit I don't know much about surgery, and as such, the idea scares the pants off me. (Or more literally, it would scare the pants off me if they were ever on me while I type on here.) However, it's hugely comforting that modern medicine mostly has their shit together—kinda my same philosophy re: roller coasters. But back in the day? Wow, ancient surgeries were terrifying.

The only surgery I've ever had and care to discuss today is the rather saccharine wisdom tooth removal procedure. I was 17 and doped up on laughing gas and pain meds, and my memory of it doesn't include much fear. (Mostly just annoyance, actually, since the last-minute scheduling caused me to miss Deerhoof's performance that night. Ahh yes, the totally brilliant prioritization of a teenage brain.) Although of course some downright scary procedures still exist today in 2015, for the most part, it's routine, which is a good word for defanging the idea of someone literally slicing your body open. Consider ancient surgeries. By contrast, that wisdom tooth thing is a bunch of freaking lollipops. Here's some ancient surgeries that'll make you so thankful for modern medicine:

Nose jobs did not come into vogue with the advent of Clueless, as it turns out. Rhinoplasty has been creeping onto folks' faces since about 600 B.C. But #trust they were also 600 times scarier then. There have been a bunch of scary cases recorded in which doctors attempted to "remedy" removed or disfigured noses. But the MOST upsetting involves was in the 1400s when an Italian military surgeon scooped a soldier's nose from the sand in a North African desert where it fell, peed on it so it was sanitized, then sewed it back on. NBD! TBH, I think I'd rather just live out the rest of my life sans nose...but that's just me.

As if breakups and rejection didn't suck hard enough, doctors in Peru had a grisly solution circa 1,000 years ago. Trepanation was a process in which surgeons used a hand drill to remove part of a person's skull. This was used to treat quite the slew of maladies, from massive head injuries to heartache. Creepily enough, some doctors were still practicing this in the US in the '70s. An actual "hole in the head," the skull bone won't grow back, but skin will—albeit with a visible slope where the bone was removed.

The first ever documented boob job went down in 1895. So maybe not ancient, but just wait a second. A doctor called Vincenz Czerny sought to even out a singer's rack after a tumor was removed from one breast. Basically, he found a fatty tumor elsewhere in her body, removed it, and replaced the harmful tumor with the benign one so her boobs were more symmetrical. Genius, basically.

Amputations during the Civil War were famously kicked off by knocking out the patient with a chloroform-soaked rag. Next, surgeons slice through skin and muscle, picking up a saw to get through the bone. It was then tied off with a small hole left so fluids may drain. That last bit alone makes me SQUIRM.

Ancient Egypt used leeches to treat a wide range of ailments—some as mild as just a bad case of farts. As it turns out, modern day physicians sometimes will still turn to leeches to keep blood flowing and from clotting during certain surgeries. So so so creepy, yet helpful, still? IDK.

Medieval cataract surgery used a thick needle to shove the cataract to the back of the eyeball. (Bye, Felicia.) Wee!

Feeling very #blessed about modern medicine, y'all. The dentist may be an unnerving venture, but that's nothing like an actual hole in the head. Not at all.

More like this
The Guide To “Witches Stairs” & Why They’re Actually Great For Small Spaces
By Emma Garza
The Best Underwear For Sensitive Skin, According To A Dermatologist
By Alexa Vazquez
We Finally Know When 'Grey’s Anatomy' Is Coming Back
By Brad Witter
Lenny Kravitz Just Made Toothpaste Sexy
By Caroline Goldfarb
Get Even More From Bustle — Sign Up For The Newsletter