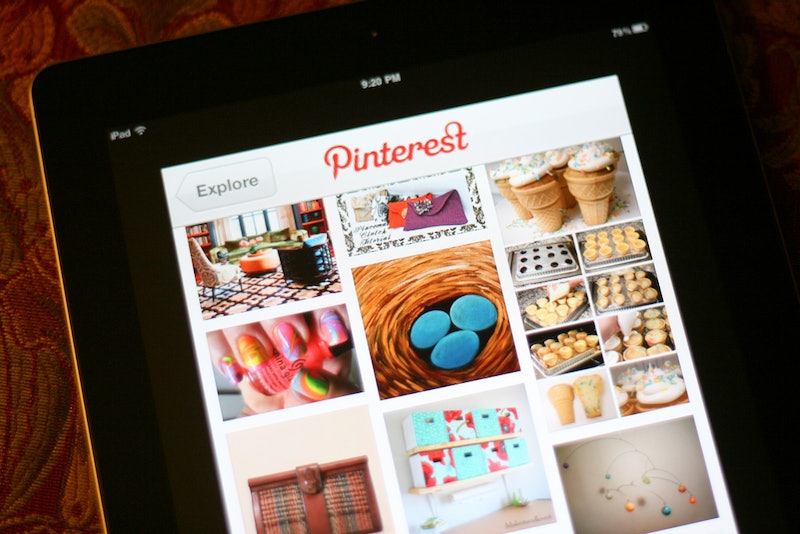 It's common knowledge by now that we tend to present carefully curated representations of our lives on social media — but could this curated view actualy be stressing us out? According to a survey conducted by TODAY, "Pinterest-related stress" is a real thing, and mothers are particularly affected by it. It's worth noting that the survey was originally conducted back in 2013; however, it's started recirculating on the Web thanks to the Daily Dot, who noted that despite the survey's age, "the results still stand." They're probably right; it's unlikely that Pinterest-related stress has vanished since 2013, and in fact it's possible it might even have increased. The survey is worth another look, so let's take a moment to reexamine it.

The survey, which was taken by about 7,000 moms, revealed that a large amount of women suffer from stress related to posts on Pinterest; namely, the overwhelming content that depicts perfection, precision, and extremely detailed DIY crafting tricks, school lunches, or home decor schemes. Around 42 percent of the women who took the survey revealed they suffer from this phenomena (including Cher, apparently), and much of it comes from the fact that Pinterest can really make you feel badly about yourself and your abilities as a cook, crafter, designer, mother, worker, or anything else.

The problem with this is that it gives the false illusion that everyone else has a better kitchen, better lemon ziti recipe, and better thank you cards for their better baby shower presents, therefore perpetuating the (usually false) assumption that everyone else's life is perfect. This isn't much different from examples seen in other social media communities: Instagram posts are usually a glorified version of reality, Facebook pages don't give us the entire story, people aren't as clever as their Twitter makes them seem, LinkedIn profiles are often an embellishment of the truth, and so on and so forth.

So in the spirit of embracing life's little imperfections, let's take a look at what we see on Pinterest vs. what happens when most of us try to achieve the standard of the photo. We've all been there; in fact, we're probably all there right this very second. So no worries about trying to achieve perfection, okay?

What's on Pinterest: Perfect bars of honey and olive oil soap (infused with lavender from her lavender bush, of course) which look so good you feel like you could literally eat them. They're complete with customized wrapping and little stickers that have her personal brand logo on them. There might even be little tips like "Mix some into the soap if you want a natural aphrodisiac!" or "These are perfect stocking stuffers or graduation presents!" because there's nothing quite like being told that you're not clean enough.

What happens in real life: You set out to make these bad boys yourself, realize you don't have all the ingredients, and the stuff you use to substitute works pretty horribly (really? Canola oil instead of coconut oil?). At the end, all you have is a mush of vaguely pleasant-smelling frothy crap that doesn't even work well as bubble bath when you try to somehow salvage it.

What's on Pinterest: Some pretty, fairy-like girl has just done something so incredible to her hair that it seems to defy all laws of physics and everything we've ever known to be true about how hair works. Somehow, the style is perfect, the color is perfect, and it's been embellished with flowers or actual diamonds or something. She also has perfectly white teeth and a shirt that says "Amour" or "Beach day is every day!"

What happens in real life: Your hair is too thick and layered to achieve her look and, quite frankly, your forearms have gotten kind of tired of trying to braid it over and over again because the angle is just weird. Plus, when you try to put flowers in, you just look like you're six years old again.

What's on Pinterest: A gorgeous-looking, cheesy, saucy, fluffy pizza pie, topped off with fresh olives, mozzarella, loads of basil chicken (cage-free, of course) and mushrooms (that were sautéd by the chef) topped with tomato sauce made from heirloom tomatoes grown in the chef's backyard. The recipe comes with a low-cal option, stuffed-crust option, and gluten-free crust recipe.

What happens in real life: You live in a small apartment in the city because rent prices are insanely high so, no, you don't really have access to a space where you can grow your own vegetables — but you think the mixed bag of peppers and onions should be just fine to put on the pizza with store-bought sauce (you accidentally picked up pasta sauce instead of pizza sauce, but it'll do). You try to toss the dough like they do in the movies, but that doesn't work because you're not the best with hand-eye coordination, so it's pretty uneven and lumpy and therefore doesn't cook properly... But hey, a dinner of half-cooked dough with lukewarm veggies and meat is actually what you were going for in the first place, right?

4. Zest Up Your Office Space

What's on Pinterest: A clean, well-lit space with pencil holders, wall decals, a bulletin board made of wine corks, gel pads for your wrists to rest on when you type, picture frames, and a decorated outlet — all home-made, of course, with various craft items that you don't even know where to procure.

What happens in real life: You try a few of the things: the cork board doesn't happen because you've been recycling your wine corks like a regular person, the wall decals don't work because you're living in a rental space and are too worried you won't get the security deposit back if they stick, and the picture frames are almost successful until you realize, after you've made them, that you don't have actual prints and you'll have to go to the drug store to get a photo printed out. You did manage to make a fancy little wine glass cup-holder, so your bedtime drink won't spill on and ruin your new MacBook again, though!