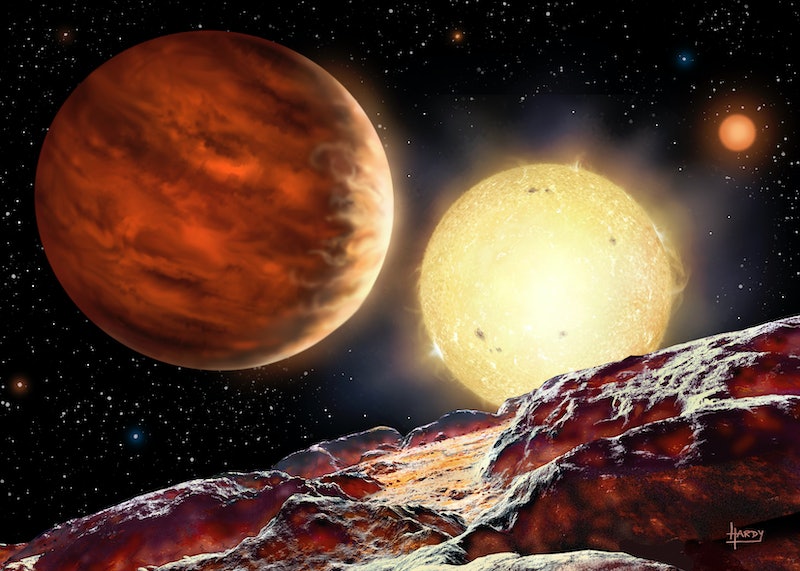 Fifteen-year-olds don't typically go stumbling upon new planets hiding out in the galaxy; but in 2013, on his third day of a work-study program at Keele University, that's exactly what one British teen did — and he's now one of the youngest people to ever do so. According to a press release from Keele University, 17-year-old Tom Wagg was combing through some planetary data when he suddenly discovered a new planet 1,000 light years away from Earth. How so? Oh, by simply "finding a tiny dip in the light of a star as [the] planet passed in front of it." (You know, because finding planets is a total piece of cake.)

While professors at Keele immediately lauded his discovery, Wagg unfortunately had to wait a bit to reach worldwide fame. Believe it or not, it's taken the last two years to prove the planet was legit. But now that that's all over and done with, the teen admits he's pretty psyched about the whole thing. "I'm hugely excited to have a found a new planet," he told Keele University in the press release, "and I'm very impressed that we can find them so far away." (How about I'm very impressed by you, Tom?)

The data the teen looked through was from the Wide Angle Search for Planets (WASP) project, which Keele University says "surveys the night skies monitoring millions of stars to look for the tell-tale tiny dips (transits) caused by planets passing in front of their host star." Inside one of those dips was Wagg's planet, which is now being referred to as simply WASP-142b, after being the 142nd discovery since the WASP software.

As for what this "WASP Software" is all about exactly, Wagg explains it "was impressive, enabling me to search through hundreds of different stars, looking for ones that have a planet." According to Keele University, Wagg's planet is the same size as Jupiter, though it orbits its star in only two days. Apparently this shorter orbital period means that it happens more often, which definitely worked to Tom's advantage since it made it easier to find. (Though that's not to take away any bit from his awesome discovery.)

To date, astronomers have reportedly discovered over 1,000 extra-solar planets just like Wagg's. But let's be honest, his is getting a bit more fanfare than usual. (For obvious reasons.) Though the planet's too far away to be seen — even by telescope — Keele University did release an artist's rendering of what the planet probably looks like. And it's pretty cool-looking:

If you're wondering what the orbiting mass of rock will be called, well, that might be the coolest part: Keele University says that a contest will be launched to help name it. In the meantime, though, Wagg's looking forward to thinking up a few name suggestions of his own — and, according to Business Insider, gearing up to study physics in the fall. (Good plan, I'd say.)

More like this
5 Differences Between YouTube Shorts & TikTok
By Emma Carey
15 Years Of The iPhone, In Pictures
By Emma Carey
YouTuber Runs Into Margaret Sanger’s Grandson While Filming
By Alexis Morillo
Why You're Seeing Green Bandanas At Abortion Rights Protests
By Lexi Inks
Get Even More From Bustle — Sign Up For The Newsletter