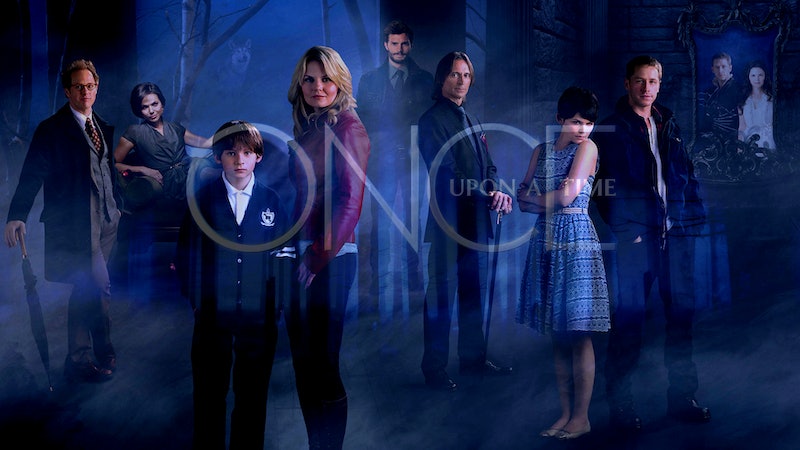 Do you know what it's like to be simultaneously obsessed with and tortured by a TV show?Is that show Once Upon A Time ? Well, you're in good company. As Bustle's official Queen of OUAT — Evil precursor not included — I totally feel your pain. All season long, I sit around thinking about what's happening in Storybrooke and what I would have written differently if I penned the script. Hiatus is spent much the same. I mean, I do have a life outside the show and all, of course (I swear!), but I've grown a bit too attached to Emma, Regina, Rumpel, and Co. to just up and forget about them all summer long. I mean, what kinda fan do you think I am?

The lead-up to Season 5 has left us all with a lot to think about, too. There's the whole "Emma as Dark One" situation, Gold's near-death experience and new lack of power, the whole "happy endings for everyone" lark... basically, a lot's been left up in the air. But that's nothing new for Once fans. If you love this show, you know as well as I do that it basically ruins you (in the best way possible) and you wouldn't have it any other way.

In classic fairy tales, True Love's Kiss (TLK for short) was all about romance and existed between princesses and the princes that came to rescue them. In Once, that notion has been turned on its head and expanded, and TLK isn't just about romance. We know it can exist between mother and child, as well, proving that true love comes in many forms and is also a catalyst for white magic, which makes it even more powerful and oh man, this is just a show but that's deep, right?

You're Shocked To Discover You Find A Mass Murderer Adorable

I mean, sure, Regina cast the curse that banished everyone to Storybrooke with no memory of who they are or where they came from. Sure, she killed and tortured thousands and would crush anyone who dared to stand her in way. But isn't she... kinda cute? I mean, she's not that person anymore. She truly wants to change, and she has changed, and also it's really hard to take her seriously as the Evil Queen when she's drinking root beer and claiming she's super "refined". Plus, she's fictional, so that makes it a little less concerning.

Bonus points if you've actually impersonated Rumpelstiltskin's full "All magic come at a price, dearie!" line, because it's a complete classic and Robert Carlyle is a genius. If you've actually found yourself calling someone "dearie" just like Rumpel did — or even "dear", which is more Regina's speed — you've got it for this show bad.

Emma Swan is completely badass and while she knows how to turn up the fashion game when it's called for, generally the Savior can't do all that saving if she's not in comfortable clothes. Riding boots and leather jackets have never been more appealing, and I bet you they fill the closet of pretty much every Once fan out there (well, at least in the winter).

You're Suddenly Into Men Who Wear Eyeliner

And pirates, for that matter. You never really gave much thought to men and makeup, but somehow Killian not only makes it not awful, he kinda makes it... hot? Hey, don't feel bad — there's no shame in it! There's just something about the bad boys that do it for some people.

Anyone who watches Once knows better by now than to think too hard about the fact that pretty much everyone on this show is related. It's mind-boggling, so don't do it to yourself. The connections are pretty tenuous and span several centuries, of course, but it's still pretty hilarious when you actually consider the fact that, say, Regina is Henry's step-grandmother and also his mother at the same time. Or that Hook is sorta kinda Emma's step-father-in-law (even though that's not really a thing). I'll stop here.

I mean, Graham didn't last too long before having his heart crushed by the Evil Queen, but he was around enough to lodge himself in the public consciousness of Once fans everywhere, making the whole Christian Grey thing slightly more hilarious... oh, and weird.

You No Longer Eat Apples, Just In Case

I mean, you never really know when there might be a sleeping curse hanging out in one of those things, right? Don't trust pastries with apple, either — although since Regina has turned her life around, it's probably a bit safer to add them back to your fruit rotation, come to think of it.

You Spend Way Too Long Wishing Magic Was Real

Because wouldn't that be amazing? I mean, to be honest, I've been feeling like that for years, ever since Harry Potter came out, but Once has just reignited my annoyance at living without magic tenfold and I'm not happy about it.