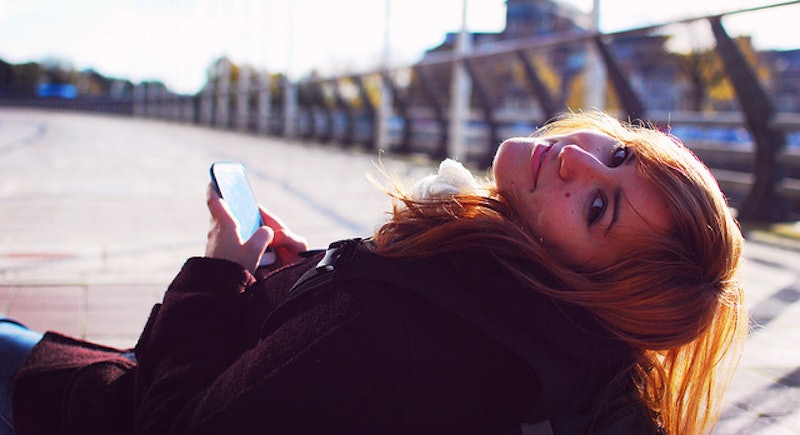 Although the stakes are pretty low with sexting, that doesn't mean it's a piece of cake. Just like any sexual act, sexting is consensual, and each partner should strive to make the exchange pleasurable for the other. The number one rule of sexting? Don't say anything you don't mean. If you're planning to engage in sex with your sexting partner at some point in the future, it would only create confusion if you said "put it in my butt" via text even though IRL you have no desire to get your butt touched. Of course, you're free to later change your mind about anything you say in a sext — your body is your body, after all.

Sext however you wanna sext, but if you want some guidance, here's a beginner's guide of common sexting faux pas to avoid — results may vary.

Obviously, everyone is free to their own opinion about the C-word. But IMHO, it's rather brash and unnecessary for sexting purposes. I would wager a non-scientific guess that this word is offensive nine out of 10 times, so if you want to describe someone's lady parts without quite as much vulgarity, stick with "pussy" or make up a creative vagina-alternative of your own. Or, ya know, just say "vagina" — it works just as well.

Actually, you can and should say that, but just NOT with that grammar. While plenty of people are cool with poor spelling/grammar in their sexts, to me, that shows sheer laziness and is a major turn-off. Sure, you might be using one hand because your other is, umm, busy, but that doesn't mean you can't make a little more effort to impress someone. Take five more seconds to spell things correctly; more often than not, you'll reap some rewards for it.

While the idea of asking someone what they want is nice, in sext-land, this phrase is the equivalent of asking a very indecisive, very hungry person what they want for dinner. It works the opposite way, too — "what do you want me to do to you?" — and both are equally frustrating. IDK about you, but this awkward "prompting" feels unnatural and puts a lot of pressure on the person being asked. I'm not a mind reader, so it's a little nerve-wracking to think I might go down one road when you wanted me to go down another. It's best to just start off explicitly and continue an open, natural dialogue from there, IMHO.

Do I even need to explain this one? For the love of God, no. Say "wet," always.

If you're in a relationship with someone you trust and sext often, this one may not apply. In general, though, there shouldn't be a reason to ask for a photo; if someone wants to show you a body part of theirs, they will, on their own terms. Asking outright seems a little rude, and may make the other person feel pressured to comply. What you should say instead is "Do you want to see my [body part]?" — never just send an unsolicited nude, because that's tacky and forceful. And if someone doesn't want to exchange pictures at all, that's their prerogative, too.

This may just be a personal preference, but "banging" sounds like how a 14-year-old describes sex, which in no way turns me on. Again, sexting is all about creativity — if you can't think of a sexy, mature-sounding way to describe what you want to do to someone, maybe you shouldn't be sexting in the first place. There's no shame in straight up saying you want to have sex or f*ck someone you're sexting. Using the "dirtier" word is highly appropriate, given the context, and will be less awkward than if you'd tried to be polite by saying "bang." (Plus, like, it's not 2004, come on.)