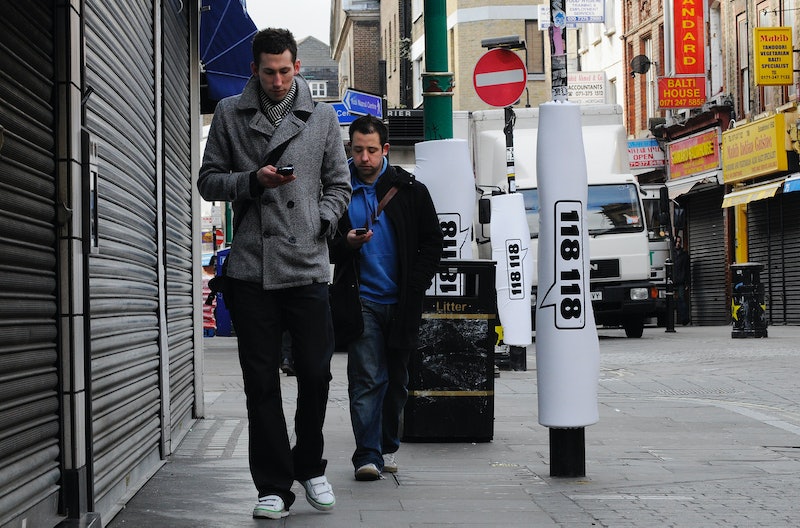 There is nothing worse than people who act like idiots on the sidewalk and get in everyone else's way, and that goes double for people who are blocking traffic because their face is buried in their phone. Which is why the new cellphone walking lanes in Antwerp, Belgium are such a brilliant idea. The cellphone-using pedestrians can segregate themselves into their own lane and the rest of us can actually get where we're going.

The so-called "Text Walking Lane" was installed by mobile repair shop MLabs, with the stated goal to help people avoid the collisions that cause them to drop and break their smartphones. And those of us who don't try to text and walk at the same time I'm sure appreciate it, too. The lanes are narrow, which probably helps people keep going straight; after all, while you're texting it's a lot easier to glance away from the screen and notice if you're still within the lines than it is to look up and reorient yourself. Although I suppose texters still run the risk of head-on collisions. But as long as those collisions aren't with me, I can't say I'm too concerned.

Now of course, the only question is whether those pesky texters will actually stay in the lanes, like they're supposed to.

Belgium isn't the only city to get cellphone lanes in recent years, though. Such things have been popping up in cities all around the world. Here are just a few examples.

I can definitely see how all those staffers chained to their Blackberries would be a problem in our nation's capital. So it's good someone's trying to do something about them, even if it was just an experiment.

This no cellphone lane was only about 100 feet long, but it still caused quite a commotion when it was first put in last year.

According to Reddit, these staircases went up all over Utah Valley University campus. And it certainly seems like a good idea — if running into people on the sidewalk is a problem, running into them on the stairs is worse.

OK, so technically this isn't a lane for cellphone users, but for ducks. But I thought you all deserved to know about it anyway. London put in sidewalk lanes for ducks, guys!

So where will creative sidewalk lanes strike next? And is the solution to texting pedestrians to give them their own lanes? Only time will tell.