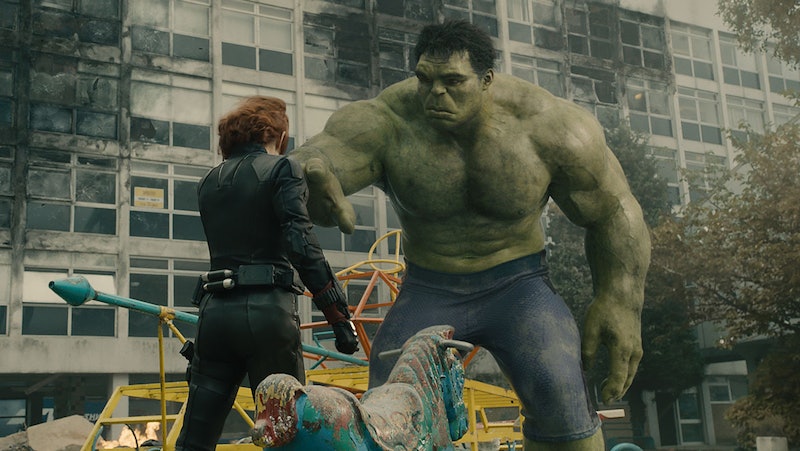 Big news, guys. Huge. Like, so enormous, it’s scary. It looks like there might be one more Avenger joining the ranks of Captain America: Civil War than the world originally thought there would be: News has already broken that Captain America, Iron Man, Hawkeye, Black Widow, the Falcon, the Scarlet Witch, the Vision, and War Machine would all be back for next summer’s superhero sequel — but, after Bruce Banner himself, Mark Ruffalo, spoke exclusively with The Daily Beast, there's speculation that The Hulk could be making an appearance in Civil War alongside his fellow Avengers. Ruffalo hinted at a Captain America: Civil War role, telling The Daily Beast, "I was talking to Robert Downey Jr. the other day, and he said, 'Ruffalo! I heard you're coming out here.' I said, 'OK! I'll be there.'"

Interesting! I mean, let’s be real: Robert Downey Jr. has nothing close to the final say on Ruffalo's contract with Marvel, but Ruffalo admitted that he would be pumped to come back for another Avengers flick. Later in the interview he said that he "can only hope" his character would be invited back.

Oh my God, the possibilities here are KILLING ME. Come on, Joe and Anthony Russo! Bring back the Hulk! Banner fans everywhere are dying for it (I can say this because I happen to be one, and I know I am.) Just in case you need further convincing, I’ve compiled a compelling list detailing exactly why the Hulk needs to come back — movie references and all.

1. He’s More Than Just A Smash-Up-Everything Kind Of Guy

The Hulk is more than just a lean, green, angry machine. He worked hard in the past two movies to overcome his self-loathing, and that makes him even easier for audiences to love.

2. He’s The Most Human Avenger

And what I mean by that is that he is perfectly imperfect, and so sweetly emotional. Remember his angst and embarrassment over loving Black Widow? That charmed the pants off of me, and I’m not ashamed to admit it.

His strength and uncontrollable violence is enough to give any movie all the action it needs — so it certainly wouldn’t hurt to add his to the superhero mix.

4. It Will Add Suspense

Every time Bruce Banner is on the screen, I am a nervous wreck, praying to the almighty Marvel gods that he can keep it together and not totally lose his cool.

Remember that scene in The Avengers where he, as The Hulk, beat the crap out of Loki and called him a “puny god.” Of course you do — how could you forget? It was comedy gold.

6. He Needs Some One-On-One Time With The Cap

Also, he needs more bro-time with Tony Stark, because those two are the cutest.

The Hulk deserves way more development on the big screen, and an appearance in Civil War is the perfect opportunity to give him at least a bit.

Come on, Marvel! You can't go wrong with The Hulk in anything.