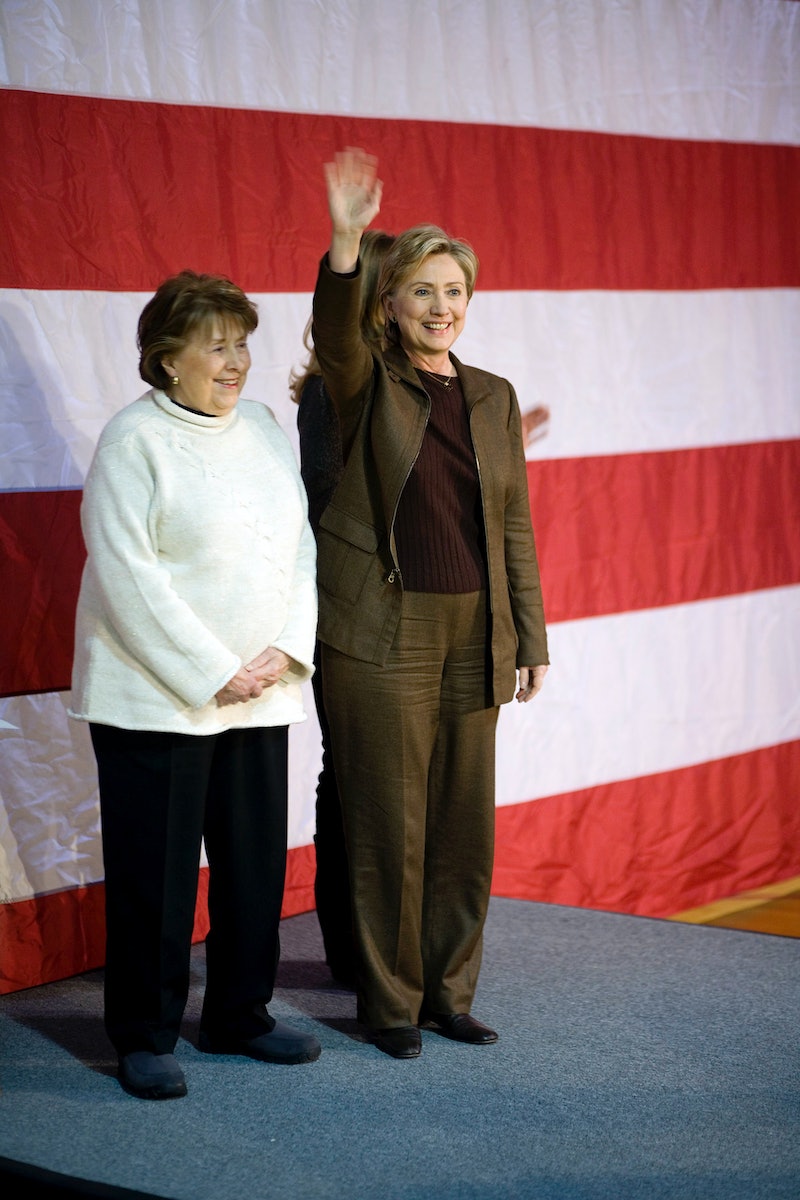 In her first campaign event of election season, Hillary Clinton will deliver a tribute to her late mother, Dorothy Howell Rodham, who had long been a supportive figure in Clinton's journey from the White House to the Senate and back again. Clinton is expected to take a page out of President Obama's 2008 election playbook while addressing fans at the kick-off rally on New York City's Roosevelt Island, using her mother not only as emotional fodder, but also an example of what a person can make for themselves in America. It's a grassroots theme Clinton's campaign has been teasing over the last couple of months, but it's time for the former secretary of state to get a little personal. Dorothy Howell Rodham did not live the charmed life of her daughter. As a child in the 1920s, she was cast aside by her parents and sent to live with her grandparents in Alhambra, California. When the Great Depression struck, Rodham started working as a maid and nanny. She essentially supported herself since she was a teenager, and never reconnected with her abusive parents or grandparents. Rodham's strained relationship with her parents starkly contrasts her close relationship with her daughter. Throughout the years, Rodham could be seen standing at the side of Clinton and her husband, Bill, supporting the power couple from their days in Little Rock to their time in the White House. And of course, when Clinton was sworn into the Senate in 2001, Rodham was there.Rodham has always been a source of inspiration for Clinton, so perhaps it's not such a surprise that the memory of her matriarch is going to be at the center of Saturday's kick-off rally. Here's six touching quotes that show just how much her mother has influenced Clinton throughout her life and career:

On Why Her Mother Would Be Proud

One of the great things about my mother is she really valued people's character more than what they did. She was proud of me, proud of my husband, certainly, but she kept herself engaged in part by really relating to people, all kinds of people, and I would like to think she would think I have done a good job but that I have also kept trying to be a good person. That was her real standard for us and for people that she knew and cared about.

On How Her Mother Survived Her Childhood

In her 2014 autobiography, Hard Choices, Clinton wrote of her mother's past abuse:

After graduating from high school Mom moved back to Chicago in the hopes of reconnecting with her own mother. Sadly she was spurned yet again. When I got old enough to understand all this, I asked my mother how she survived abuse and abandonment without becoming embittered and emotionally stunted. How did she emerge from this lonely early life as such a loving and levelheaded woman? I’ll never forget how she replied. “At critical points in my life somebody showed me kindness,” she said.

On How To Deal With Bullies

In her 2003 autobiography, Living History, Clinton wrote of how her mom taught her to handle neighborhood bullies:

“You have to face things and show them you’re not afraid,” Mom said. ... She later told me she watched from behind the curtain as I squared my shoulders and marched across the street. I returned a few minutes later, glowing with victory.

On Remembering Her Mother's Passing

Also in Hard Choices, Clinton opened up about her mother's death in 2011 and how the grief made her realize how much she loved her:

On Oct. 31, I got the call. Mom was a fighter her entire life, but it was finally time to let go. I sat by her bedside and held her hand one last time. No one had a bigger influence on my life or did more to shape the person I became. ... When I lost my father in 1993, it felt too soon, and I was consumed with sadness for all the things he would not live to see and do. This was different. Mom lived a long and full life. This time I wept not for what she would miss but for how much I would miss her.

On How Far They've Come

On The Advice Her Mother Would Give Today

Mom measured her own life by how much she was able to help us and serve others. I knew if she was still with us, she would be urging us to do the same. Never rest on your laurels. Never quit. Never stop working to make the world a better place. That’s our unfinished business.