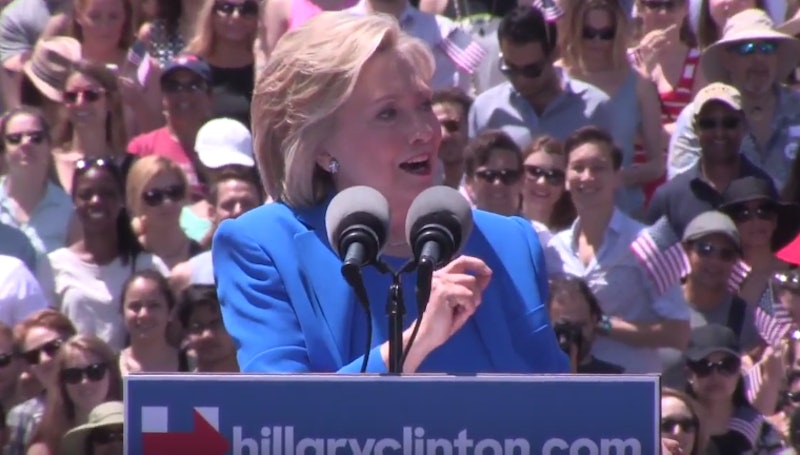 Hillary Clinton has kept a relatively low profile since her official 2016 presidential campaign announcement in April, all things considered. Rather than railing against her opponents in sonorous convention halls and booming campaign stops, the former secretary of state has spent the past few months shaking hands and meeting with prospective voters at local community colleges, neighborhood gatherings, and even a Chipotle or two. But that changed on Saturday as the Democratic candidate took to the stage in New York's Four Freedoms Park on Roosevelt Island to deliver a sizzling first campaign speech to a crowd of vocal fans. Without a doubt, Hillary Clinton's speech had some amazing and memorable moments that, as evidenced by the massive influx of social media posts, went over well with potential voters.

"You know the future President is cool when she doesn't even break a sweat in a pantsuit, and the rest of us in [the] crowd are boiling," joked Twitter user Andrew Campbell. "Somebody give me citizenship already!"

Covering a diverse range of topics under one common theme — establishing advocacy for the underrepresented — Clinton trotted out her famous "glass ceiling" line and touted her ability to reach across party lines to make Washington work.

"Our political system is so paralyzed by gridlock and dysfunction that most Americans have lost confidence that anything can actually get done," said Clinton. She added, "Our next President must work with Congress and every other willing partner across our entire country — and I will do just that, to turn the tide so these currents start working for us more than against us."

But bipartisanship wasn't the only lauded item on the menu — there were plenty of other moments of greatness for the former FLOTUS.

She Stood Up For Women (And Little Ones Too)

"They shame and blame women, rather than respect our right to make our own reproductive health decisions," said Clinton of her Republican counterparts. She wasn't necessarily wrong: with the exception of former New York Gov. George Pataki, there are few on the GOP side willing to side with the pro-choice movement.

Clinton also reiterated her support for instituting programs for young children to help them develop healthy skills early on.

"Too many of our kids never have the chance to learn and thrive as they should and as we need them to," she told the crowd. "Our country won't be competitive or fair if we don't help more families give their kids the best possible start in life."

"One thing I've learned is that talent is universal — you can find it anywhere — but opportunity is not," said Clinton, who advocated bolstering educators' rights and remarked briefly on the subject of student loan debt. "Let's make college affordable and available to all, and lift the crushing burden of student debt."

Her words might be just the tip of the iceberg in a campaign to win over the youth vote. With student loan debt now sitting at nearly $1.3 trillion, addressing the issue of loan default and finding ways to lower the cost of higher education could be an easy sell for the many struggling.

"Let's provide lifelong learning for workers to gain or improve skills the economy requires, setting up many more Americans for success," Clinton added.

She Made Some Pretty Adorable Jokes

"All our Presidents come into office looking so vigorous, and then we watch their hair grow grayer and grayer," joked Clinton. "Well, I may not be the youngest candidate in this race, but I will be the youngest woman President in the history of the United States."

She remarked light-heartedly that she would also be the first grandmother in the Oval Office as well. And the best part?

"You're won't see my hair turn white in the White House," she quipped. "I've been coloring it for years!"

She Showed Her Support For Military Veterans

"If you look over my left shoulder you can see the new World Trade Center soaring skyward," said Clinton, pointing behind her to the New York City skyline. "As a Senator from New York, I dedicated myself to getting our city and state the help we needed to recover — and as a member of the Armed Services Committee, I worked to maintain the best-trained, best-equipped, strongest military, ready for today's threats and tomorrow's."

Mentioning military veterans a second time, she highlighted the importance of offering medical services to those returning home from battle.

"When our brave men and women come home from war or finish their service." Clinton added, "I'll see to it that they get not just the thanks of a grateful nation, but the care and benefits they've earned."

She Spoke Affectionately Of Her Late Mother, Dorothy Howell Rodham

Attempting to align herself more closely with a middle-class, family-oriented voting base, Clinton spoke fondly of her mother, Dorothy Howell Rodham, whose early life was plagued with hardship and abandonment.

"I think you know by now that I've been called many things by many people [but] 'quitter' is not one of them," quipped Clinton. "Like so much else in my life, I got this from my mother."

Referring to her early days in the State Department, Clinton recalled coming home from the office exhausted only to be encouraged by her mother's words:

I'd come home from a hard day at the Senate or the State Department, sit down with her at the small table in our breakfast nook, and just let everything pour out. And she would remind me why we keep fighting, even when the odds are long and the opposition is fierce. I can still hear her saying: "Life's not about what happens to you, it's about what you do with what happens to you - so get back out there."

Bill Was Totally Proud (And He Absolutely Should Have Been)

Bill wasn't just in attendance on Saturday, he was there backing up Clinton all the way. "A proud day I'll never forget," he tweeted. (D'aww...)

The Tiny Moment The Tide Shifted — In A Monumentally Feminist Direction

Although the day was a blur of excitement and rallying, and fresh-printed tees and buttons, there was one moment that topped them all. As former President Bill Clinton walked past the throng of supporters, CNN Political Producer Dan Merica tweeted a hilarious and momentous exchange between a nearby mother and daughter.

"Woman to her young daughter as Bill Clinton walks by: 'That is Hillary's husband.'"

If ever there were a better summary of Saturday's events, it's that.