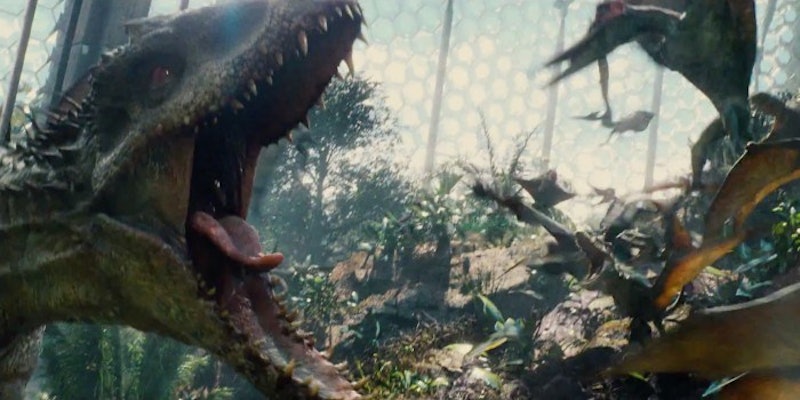 If you haven't already seen the highly anticipated dino-centric blockbuster, Jurassic World — which was released in theaters on June 12 — then don't worry. This post isn't going to spoil anything about the latest installment in the Jurassic Park franchise, but you may walk away with some new prehistoric knowledge under your belt. The anticipation surrounding Jurassic World began when the film's release date was announced in 2013. Appetites for a new dinosaur film were further whetted by the movie's pulsing trailers, which introduced a smorgasbord of terrifying new creatures to behold. Some of those creatures included a pack of volatile pterodactyl-like dinosaurs that also held the semblance of tiny T. rex's. For those that were fans of the late '80s animated feature, The Land Before Time, it was obvious that these airborne dinos were nowhere close to a genial Petrie (Petrie was the cartoon pterodactyl/comic relief).

Because so many of the dinosaurs in Jurassic World were said to be genetic hybrids that didn't actually exist during prehistoric times, it made me wonder if the carnivorous pterodactyls/flying T. rex's were at all based in reality. According to Jurassic World's official website, the aggressive beast is known as a "Pteranodon" and is "...primarily a fish eater, though Pteranodon is very aggressive."

According to Live Science, Pteranodons were, in fact, very real during the time that dinosaurs roamed:

"Pterodactyl is the common term for the winged reptiles properly called pterosaurs, which belong to the taxonomic order Pterosauria. Scientists typically avoid using the term and concentrate on individual genera, such as Pterodactylus and Pteranodon."

Pteranodons were decidedly larger than some other genera, with "...a wingspan...that ranged from 9 to 20 feet (2.7 to 6 meters)..." Yikes. Still, the Pteranodons are far from the largest creatures showcased in Jurassic World, but that doesn't keep them from making you jump out of your seat a few times.