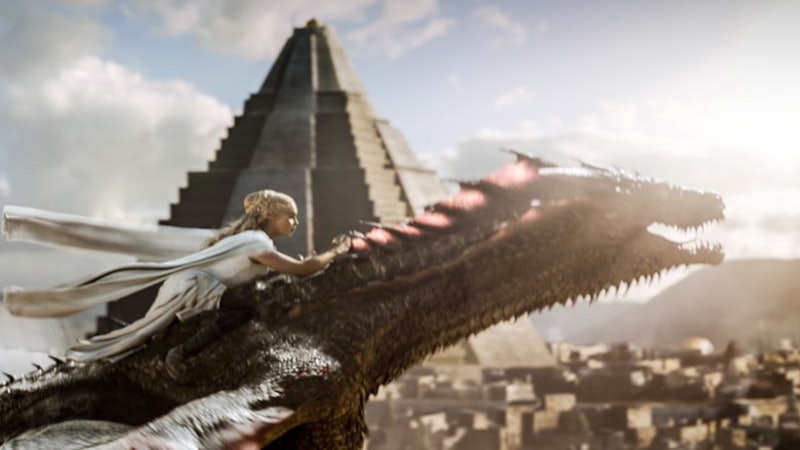 There's only one more episode of Game of Thrones Season 5 to look forward to until it's all over again for way too long. Then again, even a week without a new episode of the HBO series feels like torture, so any hiatus is bound to be horrible for those of us who look forward to spending our Sunday nights in front of the TV (or the iPad, laptop, etc.). This is, of course, a struggle pretty much any fan of any show understands, but for some reason, when it comes to this series it just feels so much worse. So exactly when will Game of Thrones Season 6 premiere? Unfortunately, that's a question that no one knows the answer to just yet.

According to the Game of Thrones Wiki, production is due to start on Season 6 next month, with the new episodes beginning to air in spring 2016. This timeline would seem to fit with previous seasons, since Seasons 1, 2, 4 and 5 premiered in the month of April (Season 3 wasn't far behind with a March 31 start date). Assuming that HBO will stick to the pattern of the last five years, we can narrow down the Season 6 start date likely to sometime in April 2016, which still feels painfully far away. We've gotta be strong for one another. We can get through this difficult time.

Plus, we're not entirely left out in the cold. There's one thing we know for sure: Game of Thrones Season 6 will feature some really big dragons. This news came courtesy of VFX supervisor Joe Bauer during a new interview with Yahoo TV, and has fans buzzing for the return of Dany's babies, which have been locked up in a dark cave for most of Season 5 and only made an appearance during Episode 9.

“The dragons will again be double in size. When the dragons were small, we had little foam rubber models of each dragon and we could carry them on and off of the set and it was no big deal. Last year, the best we could do was a head and this year it’s going to be a finger nail or something, I’m not really sure.”

Gigantic dragons? I'm in! Bauer also revealed that in previous seasons, the VFX team have always faced massive challenges to create visual effects that are eventually pulled due to their enormity of scale. However, he's certain that Season 6 will be the lucky one for the team to pull off their biggest work yet, so long as the showrunners don't "chicken out." While I have no clue what exactly they plan, I'm certainly excited to find out. Spring 2016 can't come quick enough.

As for the Season 5 finale episode's biggest cliffhanger —whether or not Jon Snow is really dead — Check out the video below to see why he might not really be a goner:

More like this
15 Photos Of The 'House Of The Dragon' Cast At The Show's UK Premiere
By Radhika Menon
Everything To Know About 'Evil' Season 4
By Meguire Hennes
Gwendoline Christie’s Partner Is Part Of Royal Family History
By Parry Ernsberger and Sophie McEvoy
Does 'Locke & Key’s Ending Mean There Could Be A Season 4?
By Sophia Moore
Get Even More From Bustle — Sign Up For The Newsletter