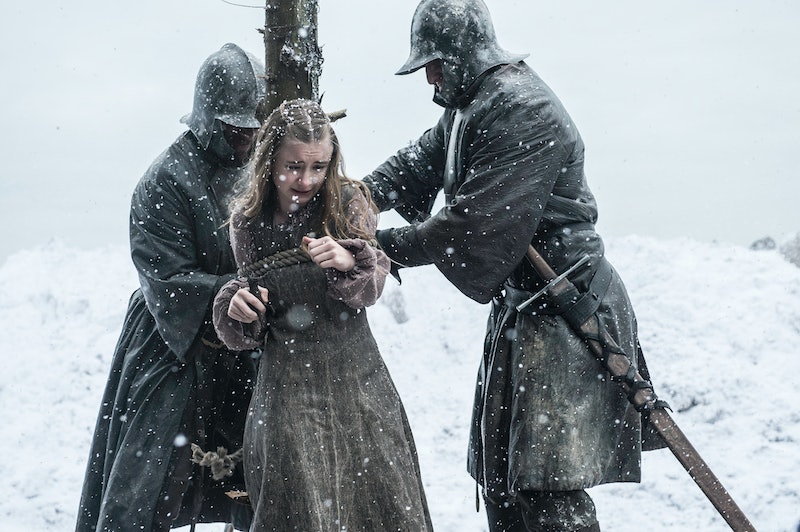 Aside from being one of the best shows on television at the moment, Game Of Thrones does an incredibly good job of punching me right in the feels at least once an episode. Seriously writers, we're already addicted to your show, why must you make us suffer as well? As we all know, there have already been too many shocking, awe-inspiring and downright trauma-inducing moments in Season 5. The recent — spoiler! — sacrifice of Shireen immediately comes to mind. but this scene is one of so many throughout Game Of Thrones' 5-year history. From Bran's fall and the Lannister incest scene in the show's pilot, all the way to Shireen's death in Season 5's penultimate episode, I'm counting down some of the most traumatic moments in Game Of Thrones history.

Saying there are many terrible and shocking moments on Game Of Thrones is a gross understatement, though. So, because there are genuinely too many to count, I've narrowed down the list to some of the most skin crawling-est, heart-wrenching, kick-you-in-the-stomach moments of the series. And it's all leading up to a finale that is sure to be terribly harrowing and will surely make this list in the future. Because honestly at this point, do we expect anything less than unforgettable when it comes to Game Of Thrones? (Obviously, spoilers to follow).

14. Joffrey Kills Ros With His Crossbow

One of the many moments when we all knew that Joffrey was the Antichrist. Raise your hands if you're glad he's dead. Yup, it's unanimous.

It was just gross, you guys!

WTF. That's really all that can be said while watching this scene.

Ugh Ramsay, why are you such a horrible human? Pretty much most of the scenes where Ramsay tortured Theon were horrible, but castrating the poor guy and then making jokes using a sausage? That broke not just him, but many others while watching.

10. Theon Makes A Move On His Sister

*Shudder* Why doesn't she say anything?!

9. Ygritte Dies After Reuniting With Jon

Jon Snow may have known nothing, but he sure did love Ygritte. And her death was painful to watch even if book readers knew it was coming.

The pilot gave us the very first traumatic moment: watching Jaime and Cersei have sex for the first time and then seeing Jaime push Bran out the open window. It definitely begged the question: Is everyone on this show awful?

Heartbreaking. No other word for Shae's betrayal and Tyrion's face when he killed her.

I know that George R.R. Martin, this episode's director Alex Graves and Nikolaj Coster-Waldau have stated they don't believe this infamous scene was considered rape (mostly because in the book it's more obvious that it's not rape), but the "sex" scene in question is just too jarring and too violent to be considered normal, even more Jaime and Cersei's creepy incest relationship. This jarring aspect of it will forever make it a traumatic scene to watch. In fact, I'm not sure I could watch it again.

Stannis is no longer father of the year. And Shireen's screams will haunt my days forever. This scene had both shock factor and gut-wrenching tragedy all packed together in a horrific gift to us all.

Ugh, despite reading the books I'm not over this, you guys. Oberyn was easily one of the best characters of the whole series and he left us much too soon.

Ramsay may officially be the worst person on this show. He took the crown from Joffrey and it's not a crown anyone should want. This scene is arguably the most traumatic so far but the sheer volume of violence and horrible emotions of this next moment was even worse...

I don't know if it's possible to top the Red Wedding. Book readers like myself knew it was coming so it's not necessarily the shock factor that made this moment so traumatic for me (though non-book readers will probably attest that shock did play a huge part for them). It was just the sheer emotional gut punch of watching all of these characters get killed. Catelyn watching Robb die and then getting her throat slashed was horrible, as was watching Talisa get stabbed in her pregnant stomach. It was too much to handle then, and might still be even now.