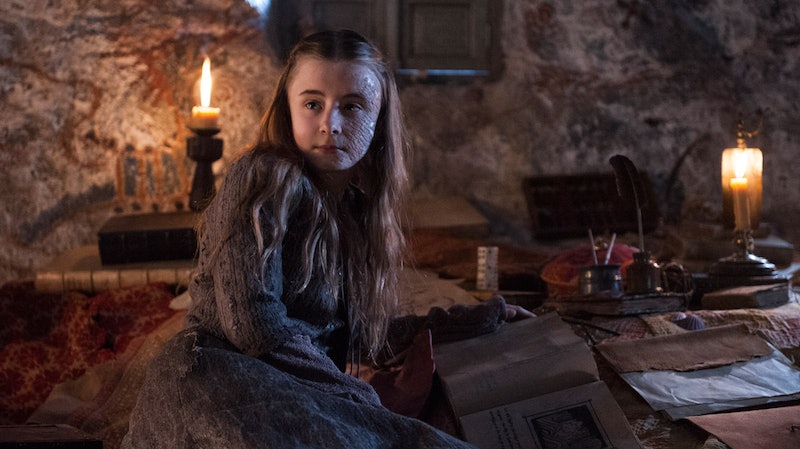 In the third season of Game of Thrones, Stannis Baratheon's old friend Ser Davos Seaworth tells him, “You’re not a man who slaughters innocents, for gain or glory.” Two seasons ago, I agreed with Ser Davos. Stannis was stern, surly, and gullible, but I always respected the fact that he loved his daughter Shireen even thought he desperately wanted a male heir. Last Sunday's episode of GoT "The Dance of Dragons" shattered every allusion I had about the Baratheon and effectively changed the entire course of the show, when Stannis let Shireen die.

We were first introduced to Shireen in the third season of the series when Stannis returned home after his defeat at the Battle of Blackwater. Though her mentally disturbed mother is ashamed of her, Stannis takes pride in his daughter. Shireen's face had been scared by Greyscale that she’d acquired when she was a baby, but that didn't seem to bother Stannis. Looking back now, it seems obvious that Shireen's life would be cut short. We've gotten to know her very well over this past season; which made the death of such a sweet and innocent person all the more horrifying.

Despite the fact that Stannis has the, “personality of a lobster," his main fault has been his conversion to the Lord of Light and his obsession with the priestess Melisandre. Stannis’ blind belief in The Lord of Light proves that his insatiable lust for power burns regardless of the cost. After his brother King Robert’s death, he decided to try and take the Iron Throne for himself. Ironically, he lacks leadership skills and he doesn’t trust his own intuition; instead he relies solely on Melisandre and her magic tricks. Claiming responsibility for both Robb Stark and Joffrey Baratheon’s deaths, Melisandre has had many false steps including Stannis’ tragic defeat during the Battle of Blackwater. Also, remember, when she kidnapped King Robert’s bastard Gendry for his blood? She claimed that three men would die, and thought Robb and Joffrey have, Balon Greyjoy is still very much alive.

I’m just going to put it out there, I'm convinced that it was Melisandre and not Ramsay Bolton’s men who attacked Stannis’ camp and here is why: Melisandre believes that only the sacrifice of King’s blood will solidify Stannis’ place on the Iron Throne. When she implies that Shireen should be the sacrifice, Stannis is rightfully horrified and disgusted. He even sends Melisandre out of his sight, which I thought meant the end of all of that.

However, not long after that Stannis’ men are attacked and their food supplies are destroyed. It all seems just a bit too convenient for me. After losing many men and horses along with the food, Stannis gives his only child to Melisandre as a sacrifice to The Lord of Light. Stannis, his wife, and his men watched in anguish as the poor girl was burned alive. It's shocking that showrunners David Benioff and D.B Weiss would make this decision because Shireen does not die in the A Song Of Ice And Fire books. In fact, she never leaves Castle Black and Stannis dies at the Battle of Winterfell. Furthermore in the books, when one of the Wildlings tells Jon Snow that Shireen should be killed because of her “unclean” appearance, the Lord Commander is horrified.

What, then, is the purpose of Shireen’s death on Game of Thrones? Well, Stannis must survive the impending Battle of Winterfell. It makes no sense that he would sacrifice everything to gain nothing. However, should he survive, I believe he will suffer a fate worse than death. Stannis’ men were horrified to see him burn his own daughter to death and I'm certain that his action will fracture their trust and loyalty to him. The people of Westeros do some horrendous things but this Mad King-level terror is where the line is going to be drawn. Undoubtedly, Jon Snow and his brothers of the Night’s Watch won’t join in Stannis’ fight for the Throne once they hear the terrible news. Shireen’s death has changed everything for Stannis for the worse.

I guess Melisandre did truly warn Stannis when she told him “You will betray your family. You will betray everything you hold dear.” It's just unfortunate that it's the one piece of Melisandre's advice that he never took to heart.