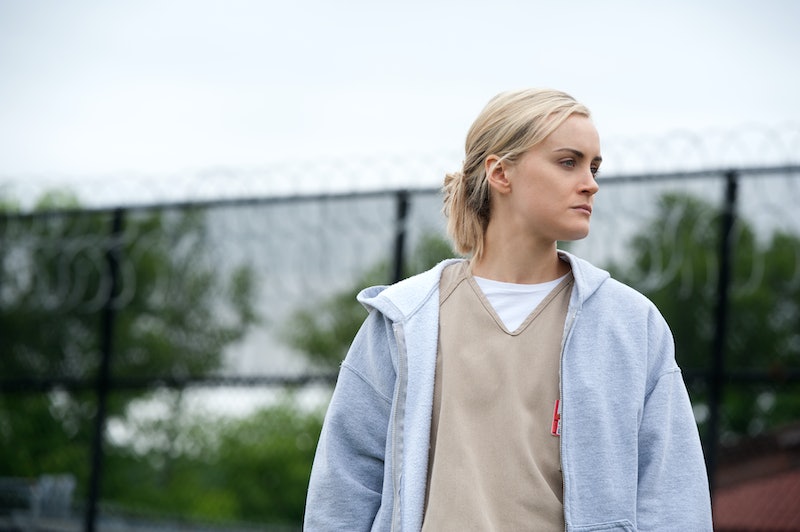 If there’s one thing that is readily apparent about Orange is the New Black, other than that it’s a true gem of modern television, it's that everyone loves to rag on Piper Chapman. She may be the show's main character, but she does do and say some incredibly questionable things, things that may or may not make us want to reach into the TV and metaphorically smack some sense into her. She isn’t all bad, though. She’s just… Piper. And she’s only starting to get a real deal education on social cues, selfishness, and self-righteousness. As Hannah Montana would say, nobody’s perfect. Not even us. So, we shouldn’t judge the unaware Piper too hard. Especially not when we’ve probably all been like Piper in one way or another.

Because despite how much we may not want to admit it, from time to time we all see a little bit of ourselves in Piper. It's a testament to the show that we manage to do this with a character so difficult, and it's another big reason that OITNB is so, so good. And relating to Piper is not such a bad thing: sure, she may be self-absorbed, but you know what else? Despite her pitfalls, she’s also proven she’s open, willing to change, and brave enough to stand up for herself. With that in mind, maybe relating to her on some level isn’t such a bad thing. Although, we probably won’t be holding a press conference to reveal this newfound information.

Here are the 13 times you're a lot more like Piper Chapman than you're willing to admit:

1. When you're on your period and you're trying to be optimistic

Other than the whole trying-to-function-while-bleeding thing.

2. When you love spicy food, but spicy food doesn't love you

3. When your friend calls you out on shopping for off-brand clothes

Whatever, they're cheaper and of a great quality.

4. When your Diet Coke gets stuck in the vending machine

And all of your shaking and kicking was for naught.

5. When that infamously terrible couple you know finally breaks up

6. When you forget to cancel your free trial and your account gets charged

But you'll try to finagle your way out of just about anything.

7. When you haven't been to church in a while

And you're not sure if the big guy upstairs is even going to let you in...

8. When you're waiting to get your taxes done on April 15th

So, no mom, it's not ridiculous that I've been waiting so long that I have become an H&R Block squatter.

9. When you can't find your keys, but then then they magically appear

The only explanation is sorcery. Definitely not that your floor is littered with clothes and shoes and actual dirt.

10. When someone suggests you don't know real hardship and then you explain your middle school experience

11. When your mom brings up that *one* time you got caught drinking as a teen

Handcuff me, Mom. It was 10 years ago, I definitely still deserve it.

12. When you hear people complaining that you're taking too long in the bathroom stall

13. Whenever you watch Game of Thrones

It's a roller coaster of emotions, really.