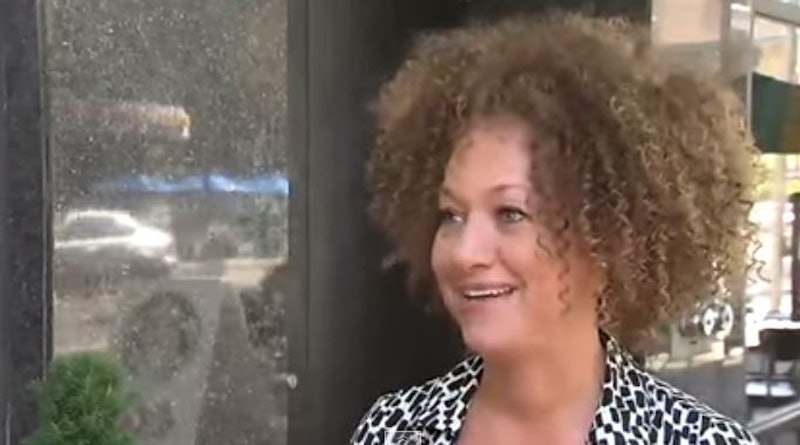 Rachel Dolezal, the president of the Spokane, Washington chapter of the NAACP, has recently come under scrutiny for allegations surrounding her racial heritage. Dolezal, who is described as a civil rights leader, has refused to answer direct questions about her background after her parents spoke to media outlets and claimed she is not black and is actually "disguising" herself. Now, community members are petitioning to remove Dolezal from the NAACP. Dolezal could not be reached for comment, but released a message that she would speak publicly on the allegations Monday night, according to the Associated Press.

Dolezal’s father, Larry Dolezal, told BuzzFeed that he and her mother are both white and that their daughter’s heritage is Czech, Swedish, and German with possible traces of Native American. Dolezal's parents told CNN she grew up in a diverse family with four adopted siblings who were black. But Dolezal has framed the controversy in the context of past litigation to win guardianship over her adopted brother Izaiah, who alleged that some kind of abuse took place in the home, according to the Spokesman-Review. Now, Kitara McClure, a local Spokane activist, has started an online petition asking Dolezal to take a leave of absence until the allegations are resolved.

The petition says it will be delivered to David Condon, the mayor of Spokane, as well as a number of local news organizations:

We will not make official comments on the validity of allegations against Spokane's NAACP President. However, until the investigation is complete and her issues are resolved we recommend a leave of absence. We do not feel that she is in a position to properly reflect the values of our communities. The questions surrounding her integrity may discredit the work that has been previously done to better the movement of social justice and equality.

The petition also says that the allegations might spur something more dangerous for the NAACP as a whole by causing people to "question the overall credibility of the organization and the systems used to select officers and its members." So far, the petition has garnered 234 signatures and says that its goal is 300.

So far, police have suspended investigations into Dolezal's claims that she was the victim of racial harassment and the city is looking into whether she lied about her ethnicity when she applied to be on its police board. Dolezal has never directly answered questions about her ethnicity. She told the Spokesman-Review "We're all from the African continent" in a reference to studies tracing the scientific origins of human life to Africa.