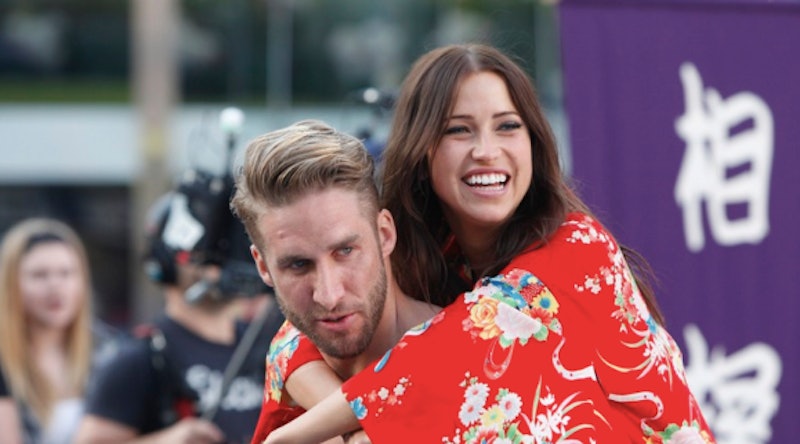 Every season of The Bachelor and The Bachelorette, my roommate and I choose our top picks to capture the respective heart of the Bachelor or Bachelorette. This time around, we made up our brackets (don’t judge), and we are certain that personal trainer Shawn B. will be the one to win Kaitlyn Bristowe’s heart. He’s handsome, he’s smart, and he loves his dog. I mean, what else could The Bachelorette winner possibly need?

Shawn B. has been the frontrunner in my household (and many, many others around America) for weeks now, but last episode’s addition of former Bachelorette contestant Nick Viall (he was on Andi’s season) may have thrown a wrench into the festivities. I mean, it seems like Nick and Kaitlyn are already super into each other, having texted and tweeted and then engaged in some heavy lip locking. Even though it’s completely unfair that Nick is allowed to pop into the competition five weeks in (thanks, producers, always looking for a ratings gimmick), I don’t think that his inclusion really matters in the long run. Shawn B. is it, ladies and gentlemen, and I can prove it. Here’s why Shawn B. will totally be the one to capture Kaitlyn’s heart on this season of The Bachelorette.

1. Shawn B. & Kaitlyn Have Crazy Chemistry

Shawn B. and Kaitlyn were obviously drawn to each other from the get-go. I mean, he did get the “first impression” rose. They’re building a foundation for a real relationship: You can almost literally see sparks when they’re together. You can’t teach that kind of chemistry.

2. Shawn B. Looks Great With Kids

Shawn’s nephews are absolutely adorable, and, from the looks of his Instagram, he dotes on them. If Kaitlyn wants kids, Shawn seems like he’d be an amazing dad.

You can tell a lot about a man by the way he treats his mom, waitresses, and his dog, and, boy, is Shawn obsessed with his Golden Retriever. According to his profile on ABC.com, if Shawn could be anyone for a day, it would be his dog. “I would love to know what goes on in his head and how crazy he thinks I am. Not to mention, he is also the most spoiled dog I know,” he said. So cute.

4. Shawn B. Is Down For Whatever

Kaitlyn’s dates have been pretty crazy, even though the show is only, like, five weeks in. So far, Shawn has had to sumo wrestle in a diaper and compete in a rap battle. Those are not exactly typical getting-to-know-you dates, but he’s handled them all with aplomb. Being able to roll with the punches is a great quality to have both on The Bachelorette and in life.

He’s a personal trainer, and he has the body of a Greek god. Obviously, he knows what he’s doing. Shawn could train me any day.

6. Shawn B. Looks Great In A Costume

Aren’t couples costumes a giant foundational aspect of a relationship? Shawn is down to dress up, ladies, so Kaitlyn should take advantage of that on Halloween (and for any other purposes she would want to wear a costume).

There you have it, Bachelorette fans: Shawn B. is totally the one to beat in the race for Kaitlyn’s heart. Of course, if it doesn’t work out, he can also have mine.