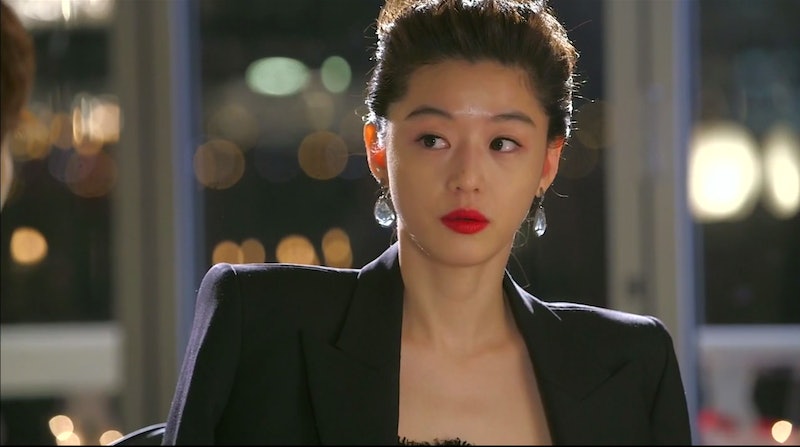 Are you new to the K-drama scene? Looking to break into the genre? Or maybe you're an old fan whose looking to start a new binge-watch? If so, My Love from Another Star is kind of a must. I mean, it was so astronomically popular that it actually got an extra episode added (it had a 20-episode order, and ended up with 21 — imagine if they added an eleventh episode to Game of Thrones!), and it's kind of the end-all be-all as far as Korean soaps are concerned.As SNL's Stefon would put it, this drama's got everything: Ultra-famous actresses misspelling words on Twitter, 400-year-old super-powered aliens with swooshy Justin Bieber hair, murderous millionaire heirs with creepy-as-heck smiles... you get the picture.

Seriously, whether you're looking for a historical drama, a crime drama, some celebrity-lampooning satire, romantic comedy-style fluff, or a touch of sci-fi, you've definitely come to the right place — it's all there (and then some). Add all that together with the fact that it stars the inimitable Jun Ji Hyun, and you've got yourself a real winner. So, with that in mind, here are the top seven things that make the series a total must-watch.

Do Min Joon is over 400 years old, and he's got super alien intelligence and super alien senses. He's basically like Daredevil meets the Doctor, with a touch of Edward Cullen mixed in.

Forbidden love is sometimes par for the course, but My Love from Another Star ups the ante considerably with some destiny: Yup, Song Yi and Min Joon first met in a past life (OK, it was only her past life, not his — he's still on the same life), and, long story short, he's basically been waiting for her to reincarnate for 400 years (which means there are some sweet flashbacks to Joseon era Korea sprinkled in).

Let me lay it all out for you: The ultra-rich Hwi Kyung (pictured above) has his sights firmly set on marrying Song Yi, but she's Not Interested (capitalizations intended) — and of course, Song Yi's best friend Se Mi has been harboring a major secret crush on Hwi Kwung for about a decade. Sounds juicy, right?

4. Oh, and a murderous millionaire brother on the loose.

If all the alien love triangle stuff wasn't enough for you, Hwi Kyung's brother also happens to be a murderer (trust me, there's a lot packed into the 21-episode season). I mean, check out that serial killer smile.

Song Yi is a major star, and she dresses accordingly. Throughout the show's 21 episodes, she wears everything from burgundy cage booties to a devastatingly chic winter cape — and there are quite a few red carpet ensembles in between.

Though she starts the drama unhappily playing second fiddle to Song Yi, she still majorly brings the fashion game: The first glimpse we get of her, she's wearing a white and pink fur cape, and it only gets better from there.

Amidst all the melodrama, Song Yi's kind of hilarious — I mean, look how she poses in her friend's wedding photos! She's also a fab drunk, and something of a crybaby.

Images: My Love From Another Star/DramaFever