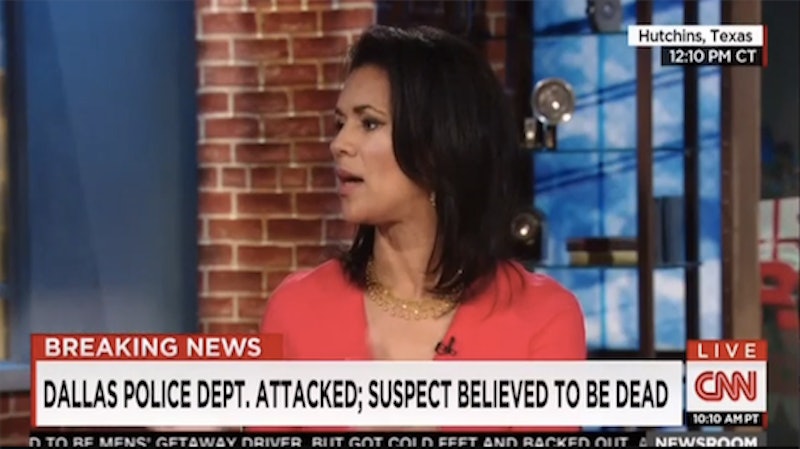 The Dallas police headquarters shooting was one of the most talked about news story over the weekend, but one TV anchor made a major flub when discussing the tense situation. Fredricka Whitfield of CNN called the Dallas police shooter's actions "courageous and brave," and the Twitterverse immediately jumped on the journalist's choice of words. Whitfield did later apology.

Speaking with CNN legal analyst Philip Holloway on Saturday, Whitfield discussed the number of possible gunmen involved in the shooting. She noted authorities initially estimated there may have been between one to four people who carried out the shooting, largely because of the size and scope of the attack. That's when Whitfield dropped the questionable adjectives.

An operation like this, it now spans 18 miles. It was very courageous and brave, if not crazy as well, to open fire on the police headquarters, and now you have this scene, this standoff. So you believe these are the hallmarks of more than one person's involvement.

At Whitfield's words, Holloway's smile noticeably dropped. He didn't directly acknowledge her remarks and instead went on to reply:

Well first off, I want to say the Dallas police department did an excellent job handling this situation, and we're very fortunate that no one other than the suspect was injured. Yes, I think it's very likely that he had at least some degree of assistance.

It might have just been two words, but Twitter users are hawks, and they immediately voiced their outrage at Whitfield's mega-oops.

The Fort Worth Police Officers Association also chimed in, calling for Whitfield to "apologize immediately" for her remarks.

The next day, Whitfield apologized during her show, saying she "misspoke."

And yesterday, during a segment on the Dallas police department attack, I used the words "courageous and brave" when discussing the gunman. I misspoke, and in no way believe the gunman was courageous, nor brave.

Authorities said the shooting suspect was James Boulware, accused of unloading a barrage of bullets at the police department's headquarters. Authorities said Boulware was also suspected of planting explosives near the building. A police chase ended in a restaurant parking lot, where Boulware was killed by police snipers.

No other suspects have been identified in the attack. Officials said that before he died, Boulware talked with 911 dispatchers in a long rant and identified himself. Boulware's father, Jim Boulware, told CNN his son was involved in a custody battle and blamed police for taking his son away.

Everyone of us has a breaking point. ... He hit his.