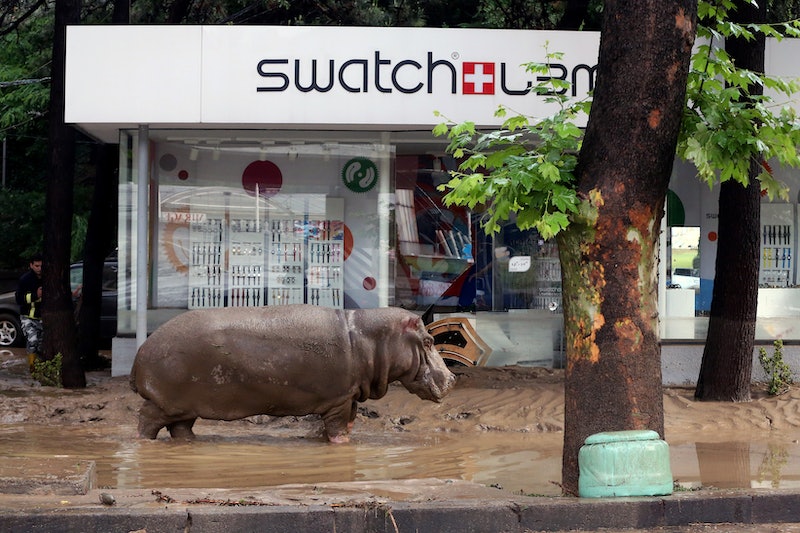 At least 12 people are dead after a massive flood in Georgia's capital city, Tbilisi, and helicopters are searching for more victims as the aftermath continues, according to BBC News. The news channel reported three of the flood victims — who NBC News said were staff members at the local zoo — were found inside the zoo's grounds. And the problems didn't stop with the surging water: zoo animals also escaped during the flood, causing authorities to be on high alert. Residents are being asked to stay indoors to avoid the risk of encountering the escaped animals.

Lions, tigers, and a hippopotamus were among the animals reportedly roaming the streets of the city, which has a population of more than 1 million residents. BBC News reported a bear was found on top of an air-conditioning vent, and a Tbilisi man found a hyena on his balcony. After the flood waters hit the zoo, the animals reported dead included 20 wolves, eight lions, and several tigers and jaguars. Only three of the 17 penguins survived, according to The New York Times and sources from Interfax News Agency. Al Jazeera reported authorities also used a tranquilizer gun on a hippopotamus after cornering the animal in one of the city's main squares.

Animals at the zoo were killed by both the flooding and by personnel, though NBC News reported it was not clear if any people killed on zoo property were harmed by the animals. Images surfaced online of a dead lion, hyena, and a wolf, and there were reports of officials using "unnecessary force" against the animals, including a young white lion with a gunshot wound to the head, according to NBC News.

The New York Times reported the director of the zoo, Zurab Gurielidze, called for an investigation into the killing of zoo animals, saying that "no order was issued to kill animals. Some policemen exceeded their authority."

The reported victims include Guliko Chitadze, a zookeeper for 25 years who, according to the AP, lost an arm in an attack by a tiger in May. Zoo spokesperson Mzia Sharashidze described the zoo as a "hellish whirlpool" where floodwaters had risen to the rooftops of enclosed buildings, according to BBC News. BBC News said Georgian President Giorgi Margvelashvili visited the affected area and offered his condolences to those who lost family members affected by the flooding.