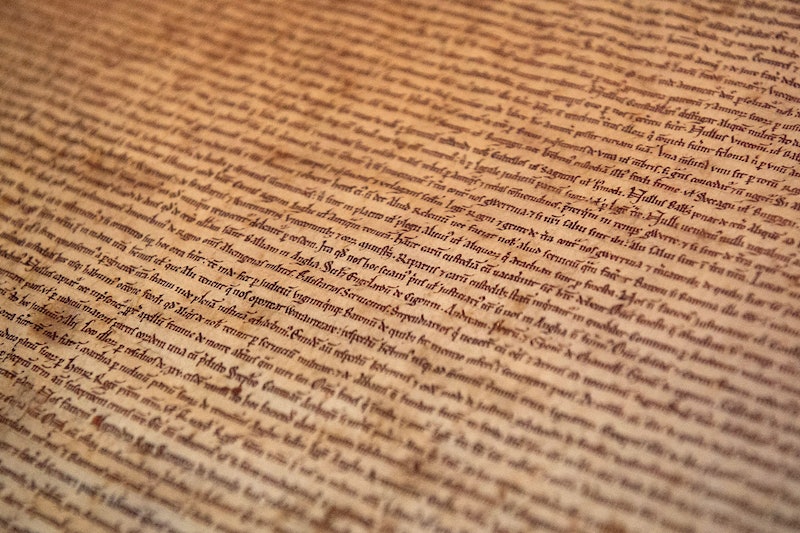 Let's try and remember those history classes of long ago, and think back on the importance of the Magna Carta. The charter, established by a monarch and a group of nobles, symbolized how a a country's people could confront and limit a ruler's powers and, in turn, demand their own rights. On Monday, the Magna Carta celebrated its 800th anniversary, and eight centuries later, we can still see its effects today.

The Magna Carta was a resolution between King John and the nobles during an uprising that protested the monarch's tyrannical rule and high taxes. The document promised to guarantee the protection of church rights, prohibition of illegal imprisonment of barons, and limitation of feudal payments. Perhaps most importantly, however, the Magna Carta showed how a king was subject to the law of the land.

Britain has been honoring the Magna Carta's birth year, in fact, with a number of celebrations scheduled throughout 2015. On Sunday, the country unveiled a statue of Queen Elizabeth II at Runnymede near the Thames River, where King John consented to the barons' demands and signed the document with his royal seal. That same day, 200 boats floated down the Thames with a replica of the document.

There are four original written copies of the Magna Carta, which was actually an oral agreement between the king and nobles. The four manuscripts were brought together for the first time in February at the British Library. Another 17 copies from several reissues throughout the 13th century also survived. Fifteen of them are in Britain, one is in Australia, and the last is in the U.S. National Archives.

The Magna Carta's influence is present in the United States and its founding principles. Some scholars see the Magna Carta's core values mirrored in the Constitution and the Bill of Rights. The Magna Carta also covered ideas now considered fundamental rights in America, such as the protection from loss of life, liberty, and property without due process. In an August address, Chief Justice John G. Roberts Jr. said, "The events of 800 years ago marked the commencement of a major undertaking in human history."

Granted, the Magna Carta wasn't entirely perfect — after all, it was an agreement between the nobility class and the king (what about the regular folks?) — but it was the first real step toward modern democracy as we know it. The Magna Carta was a pioneer by showing that no one is above the law, not even a king.