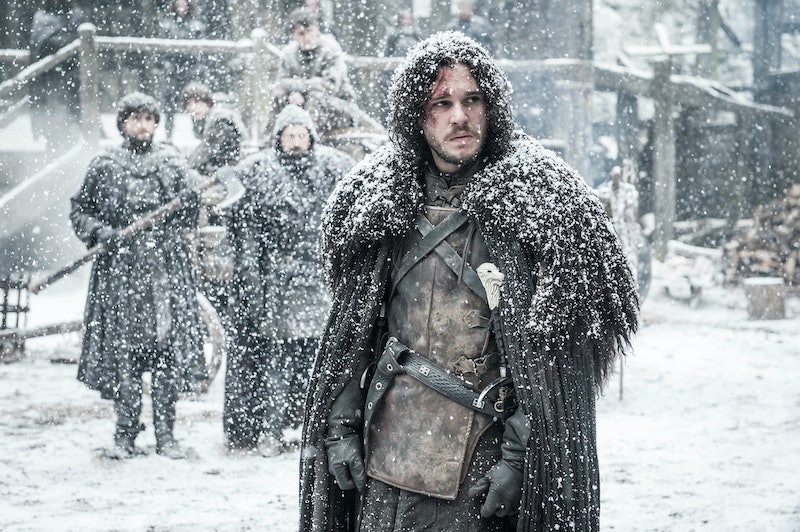 It's Monday morning, and the Game of Thrones fandom is in a state of complete shock and disarray. Admittedly, this state of being is not exactly unusual for the fandom, but this particular Monday feels like the hardest one of them all. The last honest man in Westeros is dead, and the fans just don't know how to deal. You know, besides the ones who read the books and saw this coming. Yes, that's right, Jon Snow is dead on Game of Thrones , and the show will never, ever be the same. Heck, we as fans may never, ever be the same. How will we get through the winter (it's coming!) without looking at the snow and bursting into uncontrollable tears? George R. R. Martin has struck again, ripping another one of our faves away from us with what I imagine is an evil cackle in the night.

But we will deal with this recent and devastating blow in the same way that we have dealt with all devastating Game of Thrones blows. We will hold each other's hands as we cycle through these stages of grief, until, one day, we can think the phrase "Jon Snow is dead" without crying. That day might be long in coming, but the Game of Thrones fandom is nothing if not resilient, considering all we have been forced to deal with to get to this point.

Thus, below, let's walk through the stages of grief that Jon Snow's death will cause us all to go through, and examine how to expedite the journey to acceptance.

While it's true that absolutely anyone can die on this show, there are some characters that you thought were death proof. Against all logic or good reason, you thought Jon Snow aka Kit Harington was major enough in the cast that his death would never come or, if it came, would be temporary — the length of two scenes, perhaps. Never have you been more upset to be proven so viciously wrong.

How to Move On: This one is on you, and you need to admit that. It's Game of Thrones. Worse, it's Westeros. The fact that Jon Snow is basically the last honorable man left should have been all the clue you needed to start writing a eulogy for him.

Suddenly, you can no longer see your television or computer screen. Everything is going blurry. At first you think that you are perhaps the victim of a sympathy stab, shooting pain all over your body as if the Night's Watch had stabbed you repeatedly, too, because you love Jon so much that his pain becomes your pain. However, a moment later, you realize that all you are leaking is tears. Prepare to curl up into a ball and not leave the shower for a while.

Why does George R. R. Martin always do this to you? Why do you always let him? Why is it so hard to quit this stupid show? Every time you have a favorite character, they get viciously struck down. It's not right! It's not fair! (This is the point at which you turn your room into a total war zone, flinging things at the walls and screaming like you were 3 years old again. Admit it: it feels good to throw a tantrum.)

How to Move On: You're not 3 years old again. Stop it.

Once you realize that you are not, in fact, a toddler, and thus this tantrum you are throwing is wildly inappropriate behavior, you sink into a deep depression the likes of which you haven't felt since your last boyfriend dumped you. You call your friends over to cheer you up with ice cream, then kick them out when it's clear it's not working. You watch sad movies, and throw chocolate at the screen, because everyone's a liar, and Jon Snow is dead, and life is not fair at all.

How to Move On: This is the stage that will last the longest because, after all, no matter how OK you think you are, there will always come a moment when you remember what happened and get sad all over again. Just try and go out in the world, guys. Life goes on. Somehow.

No, seriously, why do you keep letting George R. R. Martin do this to you?

How to Move On: Form a support group devoted entirely to this question. Because, seriously.

Jon Snow isn't dead. It was just a mistake. Rewatch the previous seasons of Game of Thrones, always stopping right before the Season 5 finale. Read all of the books, and ignore that particular scene where that particular death happens. Immerse yourself in Game of Thrones merchandise, and ignore any interviews you might here or articles you might read about Jon's death. You know, except this one.

How to Move On: How to move on past what? Jon Snow's not dead. He's just not. Go away.

Eventually, it will sink in, whether you want it to or not. Jon Snow is dead. Kit Harington is not returning to Game of Thrones. Your life is in ruins and your heart has been shattered. And that's OK, because that's the price you pay to watch a show that's this good. Host a small ceremony in your living room for Jon Snow, set to Beyoncé's "Heaven," and get ready for Season 6.