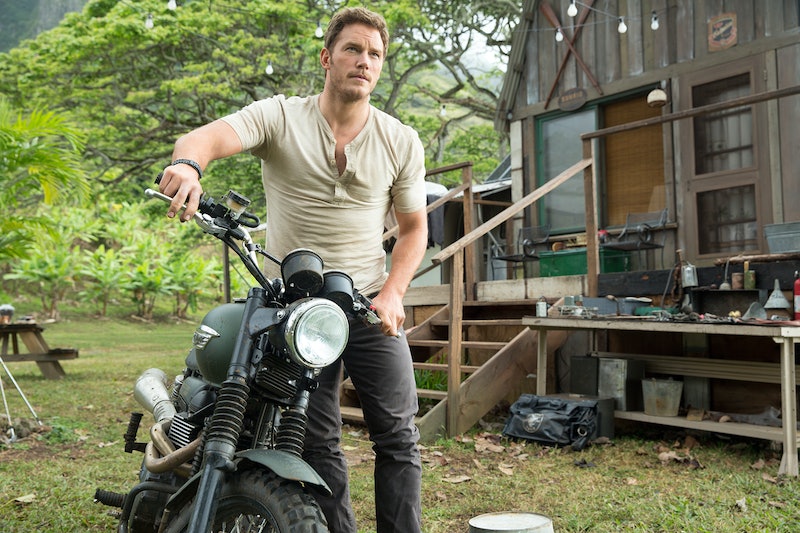 There are just some phrases that are pretty much guaranteed to make everyone happy, and make everyone agree about how awesome the phrase is. For us, that magic collection of words is "Chris Pratt is in this movie." And, now, we can apply that phrase to more than one blockbuster franchise. Apparently, Pratt will be in Jurassic World 2, and any other sequels in the dino-mite franchise, according to the star himself. And, while his turn as Andy on Parks and Rec was incredibly well-received, the actor was taken from star to superstar thanks to his turn as Star-Lord in Guardians of the Galaxy — another franchise with Pratt at the helm. With these two film series taking place more or less simultaneously, and sharing an awesome actor, I couldn't help but wonder what would happen if there was a crossover of sorts between them.

As cool as Owen Grady was in Jurassic World, I'm thinking more along the lines of what would happen if someone was stupid enough — or if there was an oversight somewhere big enough — to allow Star-Lord to be a Velociraptor expert and trainer at Isla Nublar. He might have saved the world, but I wouldn't exactly trust the human leader of the Guardians of the Galaxy with... well, anything.

And yet, I still think it would somehow end up awesome, and here is exactly why.

1. He Would Steal All The Dinosaurs

I don't know exactly how he would do it, but he's Star-Lord. He's very resourceful. He tried to make his own villain moniker catch on. Is there anyone among us who wouldn't believe his job at the park was all a ruse to be the first person to steal a dinosaur and sell it on the space black market?

2. Worse, He Would Have The Guardians Help

Worse for the park, I mean, because not only would they be very effective as a team, but they would probably cause more destruction to the park than the escaped dinosaurs ever could. In fact, with the Guardians in this movie, the plot would be launched by their destructive attempts to steal a dinosaur, and then they'd have to clean up their own mess.

3. He's Not Actually An Expert In Anything

Everything he's teaching the park guests is a complete lie, made up on the spot. And not even a very good lie, either. People will start to wonder if he's ever even seen a dinosaur before. (Which, considering how young he was kidnapped from Terra, is pretty unlikely. Which is why he came back because, really, who could resist?)

4. He'd Go After The Dinosaurs Himself

5. The Soundtrack To The Battle Would Be Nostalgic

Peter Quill has the greatest taste in music. Hands down. Sorry, Jurassic World score. You tried, but Star-Lord succeeded.

6. Don't Leave Him Around Children

All I'm saying is that Star-Lord is a gigantic manchild himself, so he will be an incredibly bad influence on those children. They'll all go home knowing nothing about dinosaurs and flipping their parents off and pickpocketing strangers on the street. Don't leave him around your children, people.

7. He And Claire Would Have The Same Relationship, Though