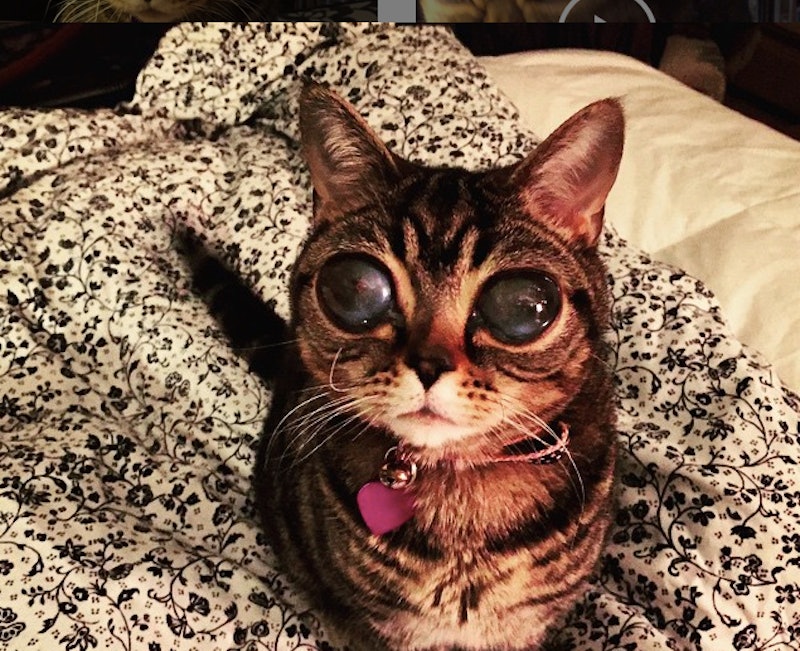 If you're not already following @aliencatmatilda on Instagram, then good for you, your soul is probably still in tact. Otherwise this oddly adorable alien cat has probably already claimed you for her own. With her giant orb eyes that seem to contain all the secrets of the universe, it's only a matter of time before Matilda, the most precious world conquerer I've ever laid eyes on, claims this earth for her own and tosses us out like yesterday's kitty litter. In the words of Taylor Swift, "Don't say I didn't, say I didn't warn ya."

Matilda has already reached internet fame on Instagram, joining the ranks of fellow famous cats Grumpy Cat and Lil Bub. Matilda's owners say that the condition began when one of her eyes randomly grew much larger than the other one. (A hazard of suddenly downloading every known quantity of the galaxy into a cat brain, but I digress.) Eventually the other eye followed, and Matilda was diagnosed with a condition called "spontaneous lens luxation," which happens when lenses detach without cause. Fortunately that has not slowed down Matilda, who not only has over 35,000 admirers on Instagram, but it probably assembling a small army to take over the world (and you just know Taylor Swift's cats were invited).

Here are a few pictures that show off her otherworldly gaze:

I just want to look into her eyes once and see the secrets of the cosmos. I'm fully aware that I'm going all "Voldemort needs the Sorcerer's Stone" on the internet by saying that, but I need it. I just do.

Here are what Matilda's eyes looked like before her condition:

And then she became our future alien overlord. Oh well, guys. I'm just going to lean into this. Things could be worse. At least Angry Cat will finally leave us alone.