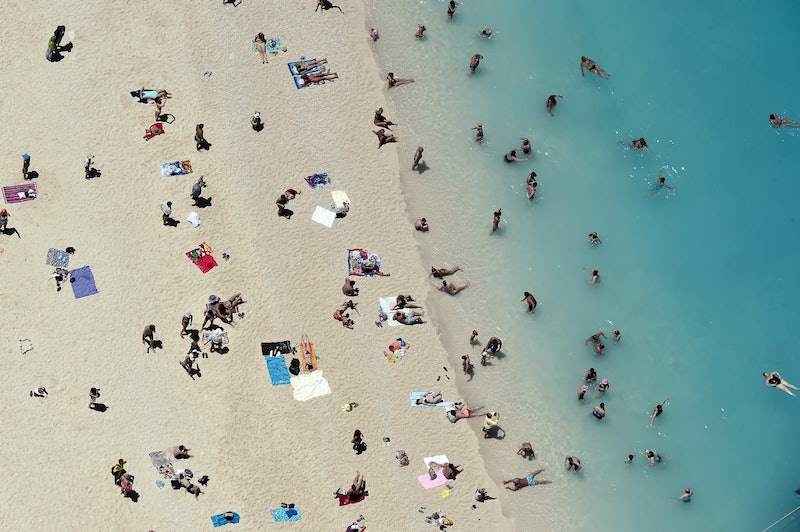 A former teen mom-turned-designer is swiftly going viral this week, thanks to her body-positive postpartum swimwear line Allusions by A.Lekay, and the empowering story behind its inspiration. As she tells Bustle, it was back in 2013 when Altrichia Lekay (who goes by A.Lekay) found herself caught in that never-ending search we all know far too well: finding the ever-elusive "perfect" bathing suit. She only had a few requirements — something high-waisted enough to hide a pregnancy scar on her belly and something cute enough to rock on the beach with confidence. But when she couldn't find a single one that fit the bill, A.Lekay took matters into her own hands and made her own bathing suit. Like a total boss.

Teaming up with a local tailor, A.Lekay worked her creative magic to craft a swimsuit that hit all those notes, and then some. The results? One pretty fierce bikini she loved so much, she proudly showed it off on Instagram while on a trip to Puerto Rico. And as it turned out, everyone else loved it, too. It wasn't long before comments started flooding in, with everyone from friends to strangers heaping the young mom with praise for her suit and asking where she got it. "You look beautiful!" wrote alechiareese. "This is hecka cute," added kmrichards83.

"The response was amazing," A.Lekay tells Bustle. "Initially this was just an idea for me to mask my own abdominal imperfections, but the response I got from other women that were mothers inspired me."

Behold, the suit that started it all:

Hot look, right? A.Lekay could have just ended it all right there; designing swimsuits she loved for herself, and occasionally sharing her designs with her followers. But lucky for us, the mom of one decided not to keep all that goodness just to herself. In 2013, she launched her own line in order to bring the designs to other moms who also wanted to cover up any stomach scarring and gain back some confidence on the beach in the process.

"My brand caters to women from all walks of life," says A.Lekay. "It's just one avenue for women who are mothers, and would still like to be fashionable, beautiful, and sexy, while masking those imperfections discretely." But it's not all about covering up what you don't want seen; A.Lekay's designs are all about being proud of whatever skin you're in. So it's no surprise then that she says her business has now become split between new moms and non-moms, who all have one thing in common: they want to rock a fierce bikini that makes them feel awesome.

Just ask Nicki Minaj, who's donning one of A.Lekay's suits on the cover of next month's Cosmo. (Because yes, that's how far A.Lekay has come in the last two years.) Here she is in one seriously fierce Fourth of July suit:

While it's pretty amazing to have any A-lister wearing your designs (let alone on the cover of a major women's mag), A.Lekay was especially psyched to learn Minaj was the cover model. "I could have flipped out, I was so incredibly surprised," A.Lekay tells Bustle, explaining that she's been something of a Minaj super fan for a while now. In fact, Minaj was the person she'd always had in mind as the perfect face of her brand. "In prior Instagram posts I would post pictures of her, saying I really wanted her to wear my brand one day," A.Lekay explains. "I'd get my followers to tag her so she could possibly see it, even though I know she has millions of followers." Needless to say, when a Cosmo fashion editor gave A.Lekay a ring one day to tell her the news, she was floored. "It really was dream come true," she says.

Now with an Instagram following of nearly 23,000, A.Lekay regularly shows off each new design to her followers. She also takes the time to share a slew of female-empowering memes, posting quotes like, "Be fearless in the pursuit of what sets your soul on fire," and "Women forget how much we can inspire each other. No one understands us like us." Or how about my personal fave: "One woman can make a difference, but together we can rock the world." Yep; this woman is seriously inspiring.

Want to own one of A.Lekay's designs too? I'm right there with you — and I don't even have kids. An online store is apparently still in the works, but for now, you can email A.Lekay at info@allusionsbyalekay.com and purchase directly from the designer herself. (Now if you'll excuse me, I have a massive swimsuit order I need to put in...)