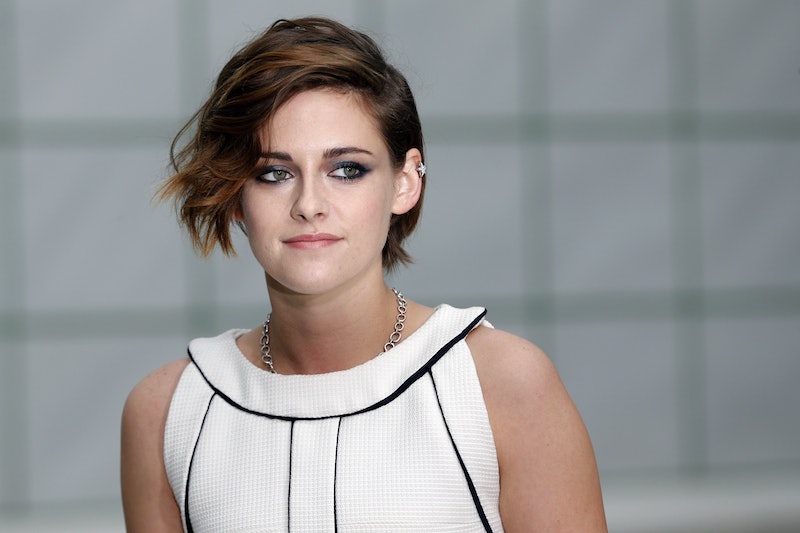 Sure, Kristen Stewart's mother may have done the typical embarrassing mom thing by kind of running her mouth about her daughter's relationships — namely, confirming that Kristen Stewart is in a relationship with a woman — but it is her easy-going demeanor and totally nonchalant acceptance that put her in the Best Mom Ever hall of fame right now. "What’s not to be accepting about her now having a girlfriend? She's happy," Mama Stewart — aka Jules Stewart, a Hollywood script writer — told The Sunday Mirror. "She's my daughter, I'm just her mom so she knows I would accept her choices."

(Update: Jules Stewart has spoken with Us Weekly and claims that while she spoke with The Sunday Mirror, she didn't "discuss Kristen.")

(Update, June 16: Mirror reporter Sharon Feinstein shared a statement on her blog, saying, in part, "I am aware that Ms Jules Stewart has stated that her interview with me has been used out of context, that she never discussed her daughter or her daughter’s relationship. That is simply incorrect.")

"I've met Kristen's new girlfriend, I like her," she continued. "What's not to accept? She's a lovely girl."

It is rumored that Kristen Stewart is in a relationship with Alicia Cargile, her personal assistant, and the alleged relationship has been under intense scrutiny for months, thanks to ever-intrusive paparazzi photos that often show the pair doing coupley things like going on a stroll together. As the rumors heated up, "tabloids awkwardly dance[d] around calling Kristen Stewart a lesbian," as Jezebel so cleverly puts it. (I believe the terms "gal pal" and "female friend" were used on more than one occasion). In fact, Jules Stewart's comments about her daughter's relationship are the first confirmation that she's actually seeing someone.

"I feel like people need to be free to love whoever they want. I accept my daughter loves women and men. It's OK to be who you are in my world," Jules added. "We all choose our friends so we should be free to choose our lovers. People are good to do whatever they like as long as they’re not hurting people or breaking the law. I have gay friends, family members, I'm accepting of people, we are all free to choose who we want to love."

And though Mama Stew's spillage about her daughter's relationship with Robert Pattinson was a little, uh, over the top — "I'm very sad that Kristen and Robert didn't have a chance to be alone together, they had to have the whole world with them and all the public stuff ruined everything, life became overwhelming," she told the paper — it was her totally amazing reaction to the Twilight star's sexuality that is worthy of celebration.

Jules Stewart's total acceptance, "why would this even be an issue for me?" attitude should be all parents' reactions to their children's sexualities. She's nonchalant without being blasé; she recognizes the fact that her daughter's relationship is significant — in the way that anyone coming out is significant — but that the actress' sexual orientation is a total non-issue in their family. Kristen Stewart can damn well love whoever she pleases and her mom will be there supporting her.

More like this
Sandra Bullock, Girlboss Extraordinaire
By Matt Harkins & Viviana Olen
Spice Girls’ Net Worth: The Richest Member Is Wealthier Than The Rest Combined
By Hugh McIntyre
Is Megan Fox Pregnant? MGK Gave A Shout-Out To Their “Unborn Child” Onstage
By Hugh McIntyre
Rebekah Vardy & Coleen Rooney’s Trial Has Officially Begun
By Bustle UK
Get Even More From Bustle — Sign Up For The Newsletter