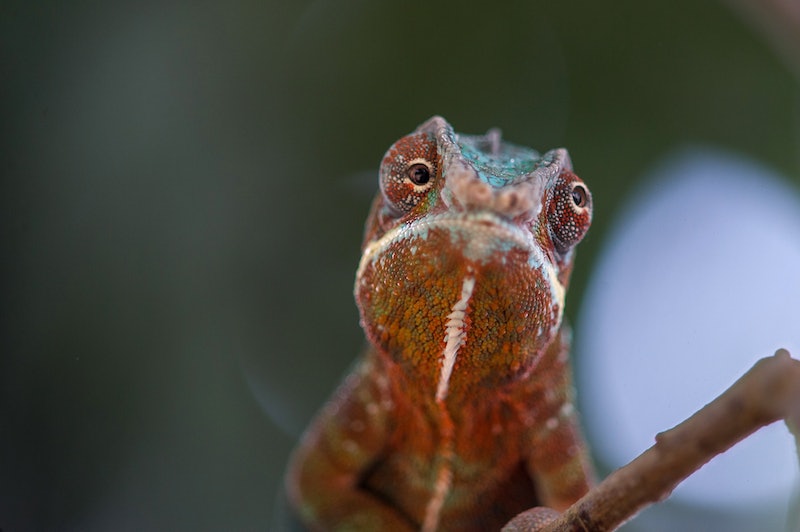 Mondays need to be officially renamed Hotmessday on the Gregorian calendar, and nobody understands that feeling better than this angry chameleon waking up. He clearly got Sunday night turnt and now has the kind of hangover that is unholy in the light of day. His owner came in to wake him up from the oh-so-cozy door he was sleeping on, and from the moment that little dude opened his eyes, he was clearly not here anyone's shit. You thought Garfield hated Mondays? Gringo the chameleon hates them so much he just tried to bite someone's hand off.

It's no secret that chameleons are pretty fond of their shut-eye, especially given the fact that they can sleep upside down. (Get on their level, other species.) They also have 360 degree vision, so if you're ever trying to sneak up on a sleeping chameleon for lolz, THINK AGAIN. Or just watch Gringo's reaction to his human interfering with his REM cycle, because for real, it's about to haunt my nightmares more intensely than Jurassic World. Or maybe he'll just jointly star with that velociraptor squad in my subconscious, because honestly, Gringo is starting to look a hell of a lot like a dinosaur himself:

Here's the full video for all your nightmare-inducing needs:

And because it's Monday, and you probably slapped the snooze alarm like you were playing Whac-A-Mole at Chuck E. Cheese for an hour, here are some other animals that were not ready to Monday. (For your well-being I made sure these ones were fifty shades of precious.)

5. This CLOWN CAR of puppies

6. This ridiculous human baby who just wrecked me for life

Now all I want to do is nap with babies and small animals for the rest of the day.