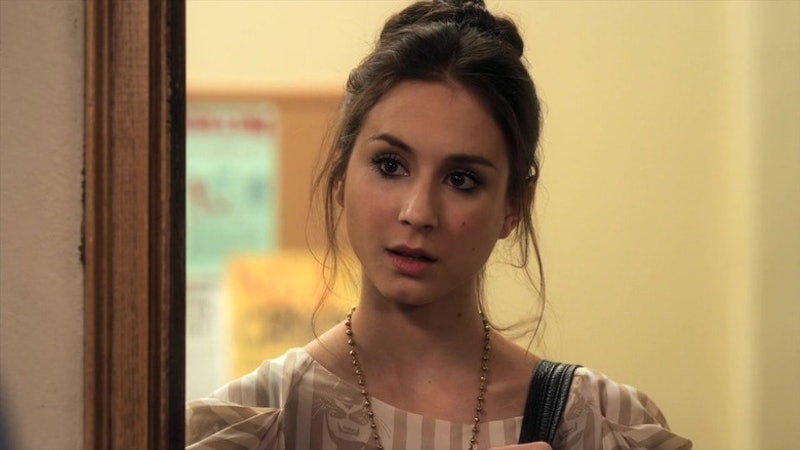 If there's any one character on Pretty Little Liars that's universally relatable, it's Spencer Hastings. She's smart, sassy, fiercely loyal to her friends (even when it threatens to destroy her relationship), never backs down from a fight, and is the most subtly badass prepster the fictional world has ever seen. And, even though Spencer was almost A on Pretty Little Liars , you still feel like she just gets you. Especially when you catch yourself being the Spencer Hastings of your friend group at a party you don't want to be at.

Think about it: How are you feeling at every party your roommate drags you to on random weekends? Answer: Like you don't know anyone, like everyone you talk to is socially awkward and not actually interested in talking to you, like you've found yourself at some god forsaken quasi-frat party, and like it's quite possible that you've just stumbled upon the biggest pocket of people who've said "like" more times in the past hour than you've asked yourself, "Who is A?" this week (and, yes, I've done that a lot of times). So, you know, basically like you want to down a couple of drinks and sass the hell out of everyone in sight.

If you thought you were alone in your feelings of boredom and despair in this scenario, fear not — because Spencer Hastings has a reaction for every possible party situation. Here are 9 times Spencer Hastings was you at every uncomfortable party ever.

1. When A Rando Tries To Hit On You

2. When You're Forced To Listen To Someone Talk About Their Finance Job

3. And Then He Tries To Tell You How Much He Makes

Really, you lost me at "fiduciary."

4. When Someone Asks You Why You Don't Want A Tequila Shot

I'd actually like to be able to get out of bed before 1pm tomorrow, but thanks so much for your generosity.

5. When You Find The Host's Dog In The Room Where They're Keeping The Coats

6. When Someone Tries To Get You To Play Flip Cup

7. When One Drunk Girl Tries Really Hard To Have A Heart-To-Heart

Now please stop drinking and trying to make me come to the bathroom with you.

8. When Your Friend Asks You Why You're Going Home

It'll be close to 2am by the time I manage to get home and I really want to get Seamless before I go to bed and all the good places will be closed if I don't leave now!

9. When A Guy At The Party Says They Hope To See You Next Week

Thank you, but I will never come to this party again.

For more on Spencer and her inherit badassery, check out Bustle's Pretty Little Liars podcast below.

More like this
Everything To Know About The 'Pretty Little Liars' Reboot On HBO Max
By Mary Kate McGrath, Jack Irvin and Radhika Menon
'Friends' Creator Marta Kauffman Opened Up About Misgendering A Guest Character
By Grace Wehniainen
Jesse Tyler Ferguson Had A Funny Run-In With A Fellow ‘Modern Family’ Alum
By Grace Wehniainen
“The Door Is Always Open” For Another 'Breaking Bad' Spin-Off, Says AMC Boss
By El Hunt
Get Even More From Bustle — Sign Up For The Newsletter