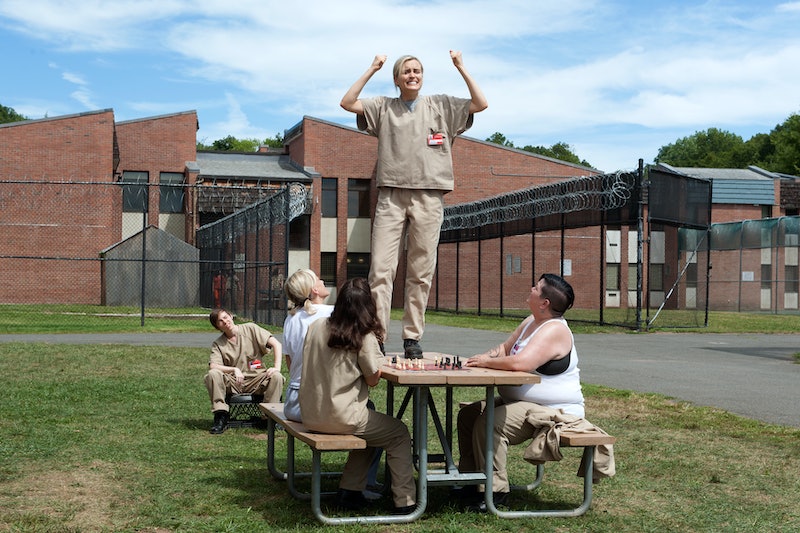 If you're a reasonable person who's got your priorities straight, I can only assume that you're reading this after you’ve finished binge-watching Orange Is The New Black S eason 3. Not only has the ground-breaking series spiced up our Netflix queues and provided us with an opportunity to watch a diverse female cast (not exactly the norm in television today) — OITNB has turned our attention to American prison life, opening people's minds about the real lives of prison inmates, even if its depiction of life inside prison is a little dramatic and unrealistic. If you’ve never read up on what really happens inside the U.S. penal system, OITNB is the perfect segue into learning more — because, frankly, there are some serious issues that deserve all of our attention.

Like many of us, I grew up pretty blind to what actually happens inside the American criminal justice system. I thought people committed crimes and then got sent to prison, simple as that. But as I learned more about our prison system, I realized how mistaken my old beliefs were. There's much more to the story of who is sent behind bars in the U.S. (and why they end up there) than we're typically taught. So, as we keep our eyes glued to Piper and Alex and Crazy Eyes, remember the real people incarcerated in America, too. Here are 5 facts about the U.S. prison system to keep in mind as you watch.

1. We Lock Up More People Than Any Other Country

Between 1925 and 1980, our incarceration rate was relatively stable and similar to other industrialized democracies. But the “tough on crime” policies of the eighties caused a tremendous spike in our incarceration rates (more on that later). Many experts now say we are facing an epidemic of mass imprisonment, which is defined as “a rate of imprisonment… that is markedly above the historical and comparative norm for societies of a given type.”

2. Most Incarcerated People Are In Prison For Drug Offenses

Most of the people behind bars today are there due to the war on drugs, a system of drug laws first put in effect in the 1970s, which included mandatory sentencing for drug possession and harsher sentencing guidelines. In 2013, more than 1.5 million drug-related arrests were made, 80 percent of which were for possession only.

Over 50 percent of currently incarcerated individuals are there for drug offenses. 27.6 percent of those imprisoned on drug offenses have been busted for marijuana. Sadly, 2.7 million children are being raised in a house that is missing one or more parents due to these drug offenses. The Obama administration has begun working to shorten the prison sentences of many people who were imprisoned with very harsh sentences at the peak of the war on drugs.

3. People Of Color Are Most Impacted By Our Drug Laws

Many experts and activists have been calling for decriminalization of certain kinds drug possession in recent years, as current possession laws have profoundly — and unequally — impacted communities of color. Black and Latino people are far more likely to be imprisoned under current drug laws than white people who commit the same exact crimes, despite the fact that all ethnic groups use drugs at similar rates. Research published in the Yale Law Journal shows that “prosecutors are twice as likely to pursue a mandatory minimum sentence for black people as for white people.”

Black people make up 13 percent of the total U.S. population, yet they comprise 40 percent of the incarcerated population in state and federal prisons — including 30 percent of those in prison for drug offenses. Black men who drop out of high school have roughly a 70 percent risk of going to prison at some point in their lives. And while Howard University professor Ivory Toldson debunked the frequently cited statistic that more more black men are in jail than in college in 2013, the facts are still unsettling: he noted that 840,000 black men are incarcerated in the U.S. (compared to 1.4 million black men enrolled in college).

4. The Government Spends A Lot Of Money On Incarceration

As the Atlantic brought to our attention a few years ago, it is more costly to spend one year in a New Jersey state prison than it does to attend Princeton University. Rebecca Klein of the Huffington Post said, "Perhaps if states spent more money on educating students, they would not have to spend so much money keeping prisoners incarcerated."

5. A Disproportionate Amount of Mentally Ill Individuals Are Incarcerated

In the 1970s, the government — motivated by 1963's Community Mental Health Act — made the decision to shut down state-run mental health institutions. Though that act's aim was to change the way the mentally ill were treated, switching the focus to care that allowed mentally ill individuals to live in their homes and remain part of their community rather than live in an institution, that vision was never realized — and the act's primary legacy has been destabilizing mentally ill individuals who were once cared for in institutions. Many of the individuals who had once lived in the shuttered institutions ended up on the street, and a large number of them ended up incarcerated. Being in prison only exacerbates most mental health issues, as prison inmates often don't receive adequate mental health treatment, and are forced into hostile environments, including solitary confinement.

A 2009 research study proved that the mentally ill are overrepresented in the criminal justice system — they end up there at two to four times the rate of non-mentally ill individuals. Which is probably why the recidivism rates among these individuals are much higher than normal: 54 percent of people experiencing a severe mental illness who are imprisoned will be re-incarcerated, and 68 percent of people with a mental illness and a substance abuse disorder will be re-incarcerated.

If you're obsessed with the lives of the OITNB crew, remember: our real prisons are also filled with all sorts of people, who ended up there for all sorts of reasons. Give them the same empathy you'd give the inmates of Litchfield Penitentiary.