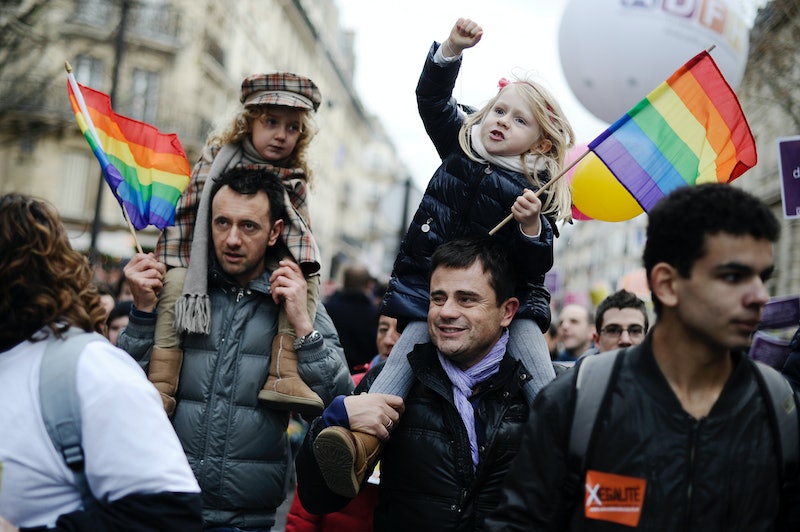 Just to further prove that we need to make same-sex marriage constitutionally legal already, a new study has confirmed that children of same-sex parents are not negatively impacted. Or, more specifically, contrary to what homophobes would like you to think, kids of same-sex parents “experience 'no difference' on a range of social and behavioral outcomes compared to children of heterosexual or single parents.” I can’t say this is breaking news, but maybe now we can just accept this for the fact that it is, let gay couples get hitched, and move forward as a society? Maybe? I think that would be a great way to celebrate Pride Month.

The study out of the University of Colorado at Denver analyzed the data in thousands of articles by other researchers looking for something that might point to kids of same-sex parents being worse off. What the researchers found was the same thing over and over again: Kids of same-same couples are doing pretty damn well!

It was in examining decades’ worth of research that the team found that it was about 1990 when study results started to prove that same-sex parenting was in no way harmful, then by the time 2000 rolled around the data reached an “overwhelming” consensus that will hopefully put the issue to bed already. If anything could possibly throw the kids of same-sex parents for a loop, it would be the fact that their parents' love and marriage aren't legally recognized; not that their parents are gay.

Because it is Pride Month and it's time to celebrate our LGBT friends, here are six reasons why same-sex parents make for awesome parents.

According to psychologist Abbie Goldberg, same-sex couple rarely become parents accidentally, which is sometimes the case in straight couples. Because of this, gay couples who are parents have kids because they genuinely want them; there was no slipping one pass the goalie and having an adorable little “accident.” When you want to be a parent, that’s usually what it takes to be a truly devoted parent.

Although studies confirm that there is no difference between kids of same-sex parents and kids of straight parents, there is proof that children of same-sex parents are raised to be more open-minded and tolerant. A 2007 study of 46 adults, with at least one gay parent, found that 28 percent of them “spontaneously offered” up the fact that they felt more empathetic and accepting than their peers who were raised by straight couples.

A 2010 study also found that these kids are more nurturing, too, especially when it comes to kids who are younger than them.

3. Their Children Aren't Bogged Down By Gender Norms

Children of same-sex couples don’t look at different household chores as being a “man’s job" or a “woman’s job," because in those families there’s a more even distribution of chores without gender being involved. According to a 2015 study by PriceWaterHouseCoopers and the Families and Work Institute, when it comes to laundry for example, 44 percent of same-sex couples share the responsibility. In 69 percent of straight couples, laundry duty is delegated to one person and one person only… can you guess who?

4. They Have Smart Kids

According to a 2010 study, children of gay parents are just as likely to succeed in school as kids with straight parents. But, and I totally love this one, boys of lesbian parents average higher GPAs than boys of straight parents.

5. Their Kids Are Confident

It’s not easy being a kid and because of that, a lot of them suffer from confidence and self-esteem issues ― but not the kids of same-sex parents. A 2010 study found that kids raised in a same-sex household got one hell of a confidence boost. The thinking is parents who are actively involved and committed to their child’s success and happiness, makes for a self-assured kid.

6. Their Children Are Healthier

A 2014 study out of Australia found that kids of same-sex parents had a six percent higher rate than kids of straight couples when it comes to general health. With parents so committed and growing up in homes where nurture and acceptance are driving forces, it only makes sense that these kids would be healthier, both psychologically and physically.

More like this
The 19 Best Tweets & Memes About Bisexual Awareness Week
By Lexi Inks
An Honest Review of MeUndies Boxers, According To A Non-Binary Person
By Megan Lasher
Pro Footballer Zander Murray Is "Blown Away" By Support After Coming Out
By Sam Ramsden
Jinkx Monsoon Is About To Get Real Sketchy
By Sam Ramsden
Get Even More From Bustle — Sign Up For The Newsletter