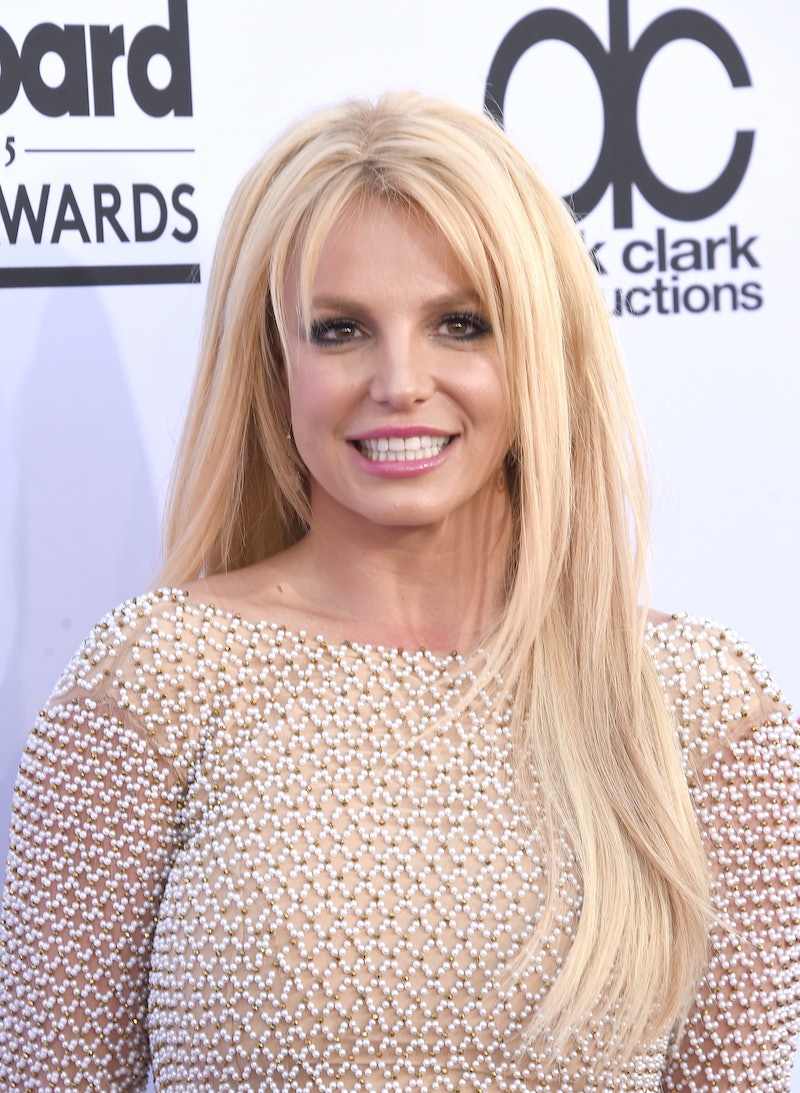 Well, it's official: Britney Spears is a fangirl just like the rest of us. As much as I've always dreamed of nannying for celebrity babies like North West and Blue Ivy, Spears is way ahead of the rest of us. In a new interview with Good Morning Britain, Spears said she'd love to be Brad Pitt and Angelina Jolie's nanny, and I have to hand it to her — that sounds like a pretty sweet gig. Although she hasn't spent much time with the family, especially not altogether, she's ready to take on the task of caring for all six of their kids while Mom and Dad are hard at work making our future favorite movies.

"I’ve met Brad Pitt once but I’d like to meet the [family] again, and I’d like to become their nanny,” she said. "[The big family] sounds fun to me!" Same, Spears. And as much as I'm semi-obsessed with Zahara, Maddox, Shiloh, Pax, Vivienne, and Knox, I don't have a ton of nannying experience. But for Spears, who's already an awesome mother, it'd be a piece of cake. If the Jolie-Pitt clan is looking for a new baby-sitter in the near future, they should definitely call Spears, because she'd be awesome at it.

1. She already knows how to relate to kids

After being a mom to her sons Jayden and Sean, Spears has experience wrangling two boys who are pretty close in age. That's definitely not the same as watching six kids at once, but I'm willing to bet these two can definitely be a handful at times.

2. She understands their crazy childhood

Like Jolie and Pitt's kids, Spears grew up in the spotlight. Dealing with paparazzi, rumors, and the bad stuff that comes with fame? Spears can totally understand anything they're going through.

3. She could teach them everything about music

While Pitt and Jolie definitely have most of Hollywood covered, if their kids are interested in music, they're not the best teachers, but Spears totally is. She can teach them dance, bring them to recording studios, take them backstage at concerts — she's basically capable of taking them on the coolest field trips ever.

4. She gets good reviews from her niece

Jamie Lynn's daughter said it best: She wants to spend every day with Aunt Britney. Can you blame her?

5. Her kids could use some new skateboarding buddies

As Spears cheers in the background, obvs.

6. She's pretty much seen it all

Between the difficult year that was 2007, divorce, being a judge on X-Factor, and loving Justin Timberlake through his ramen noodle hair phase, Spears is a champion at surviving tough situations. No matter what Jolie and Pitt's kids throw at her, it's not going to come as a surprise, and she can probably dole out the discipline like nobody's business.

Of course, I have a feeling Spears is way too busy to actually nanny for their kids, but in my dream world? Spears would be wrangling their kids as we speak, and a reality show would be made about it.

More like this
Britney Spears Met The Weeknd & Sam Levinson, So She May Actually Be On 'The Idol'
By Jake Viswanath
Britney Spears Thanks Fans After Miscarriage & Explains Why She's Writing A Book
By Jake Viswanath
Kaley Cuoco & Tom Pelphrey Just Made Their First Public Appearance As A Couple
By Hugh McIntyre
Natalia Dyer & Charlie Heaton's Relationship Is Still Going Strong
By Allyson Koerner and Sophie McEvoy
Get Even More From Bustle — Sign Up For The Newsletter