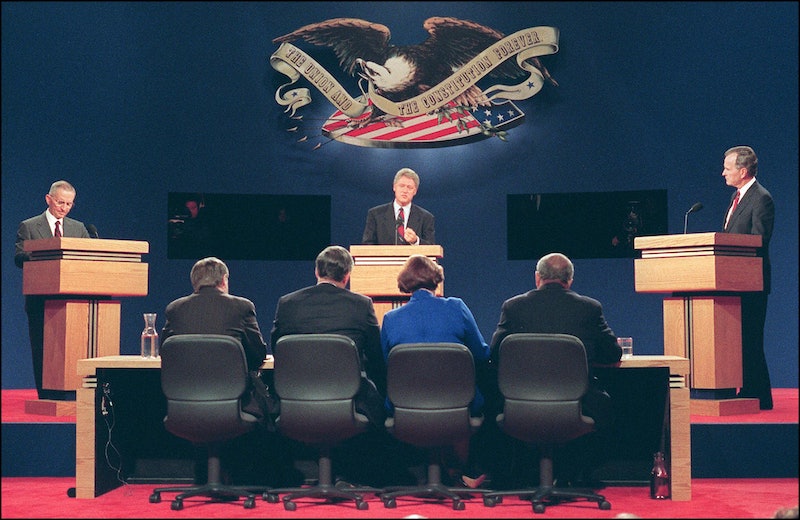 Election season is in full swing and despite the continually expanding roster of White House hopefuls, things are starting to look unusually familiar — especially for those who tuned in during the early '90s (or at least watched their parents tune in). From the field of Clinton and Bush front-runners to the overall atmosphere of post-war criticism, the 2016 season looks like it will be a near carbon-copy of the 1992 race on several key issues. Times may have changed, but the talking points, it seems, remain the same.

Unlike gubernatorial or congressional races, the focus lies not so much in what can be done, but what hasn't been done — and if the current debate is any indication, not a lot has shifted in the past two decades. Of course, that doesn’t mean that voters will vote the same way they did then, and that’s a hefty bill to foot on nothing more than guesstimation.

Still — better an educated guess than a brash one. By drawing comparisons between the two races and factoring in recent poll numbers and studies, analysts might be able to crack the code on how presidential candidates are able to draw votes in the future. Let’s take a look at the three most significant items on the docket:

Those were the words of campaign strategist James Carville, emblazoned on a sign that hung in former Arkansas Gov. Bill Clinton’s Little Rock headquarters during his successful ‘92 presidential run. Meant solely as a reminder to all Clinton staffers to focus on unseating former President George H.W. Bush by using the failing economy against him, the quip hasn’t strayed far from the beaten political path — and while 2016 candidates certainly aren’t facing the same recession that their predecessors did (or in Hillary’s case, her husband who ended up succeeding in using that diversionary tactic to grab hold of the presidency), they absolutely have a slew of economic woes to shuffle through over the next 18 months.

With a host of reports out of Gallup and the Pew Research Center showing overall rising economic confidence — something Democrats will likely tout heavily — clashing with reports by The Wall Street Journal and NBC News which indicate that over 75 percent of adults worry about the economic futures of their children and grandchildren, the battle over the rise and fall of the markets will remain a contentious one, just as it was in 1992.

With President Obama’s Affordable Care Act consistently in limbo, the debate over healthcare rages on — something the candidates of the ‘92 cycle would have understood well.

“Republicans believe government control of health care is irresponsible and ineffective,” wrote the Republican National Committee in August 1992. “We believe health care choices should remain in the hands of the people, not government bureaucrats.”

At the time, President Bush had introduced a game-plan that was strikingly similar in several aspects to the talking points currently being passed around the Democratic table now: with suggestions of tax credits for low-income individuals to make insurance more affordable and a mandate that employers provide coverage for pre-existing conditions, the debate over healthcare mirrors its predecessor in more ways than one. And with a Supreme Court ruling set to come down this summer over the legality of state healthcare exchanges, the fight is far from over.

“All Americans should have universal access to quality, affordable health care—not as a privilege, but as a right,” wrote the Democratic National Committee in 1992… or wait — was that in 2010?

If this cycle’s presidential candidates can't intellectually grapple with the current crisis exploding in various regions of the Middle East, it’s a safe bet their presidential run will become nothing more than a pipe dream. That throws candidates like Ted Cruz and Marco Rubio, both foreign policy hawks who favor aggressively rooting out ISIS and brutish dictators over continued diplomatic discussion (policies that international experts have touted as sophomoric and inexperienced) — right into the thick of things without a lifeline.

Surely, the debate over Middle Eastern relations is ongoing, as it was in the early ‘90s during a particularly tense session of Arab-Israeli conflict. But this time, the Democrats might have a foothold in the peace-market — depending on how you look at it.

In the wake of a failed Iraqi campaign, liberals are quick to denounce the “war-mongering” ways of the far-right, which may, in turn, earn them support from Republicans who have slowly been sidling to the center. But with the threat of groups like ISIS, Boko Haram, and al Shabab looming heavy overhead, radical promises of boots-on-the-ground may actually sit better with voters going forward.

It’s a complex, constantly-shifting debate that, in 23 years can still only be summed up with one word: “messy.”

As a new era of Bush and Clinton legacy candidates rolls in, the largest talking points have not changed enough to revolutionize the current two-party system. But more frustrating than the stagnation is the seemingly ongoing trend of ineffectiveness that seems to rain down from each election cycle.

Whatever side you're on, prepare yourself for yet another round of rehashed talking points over the next year and a half — these issues aren't ducking into the wings for a while.