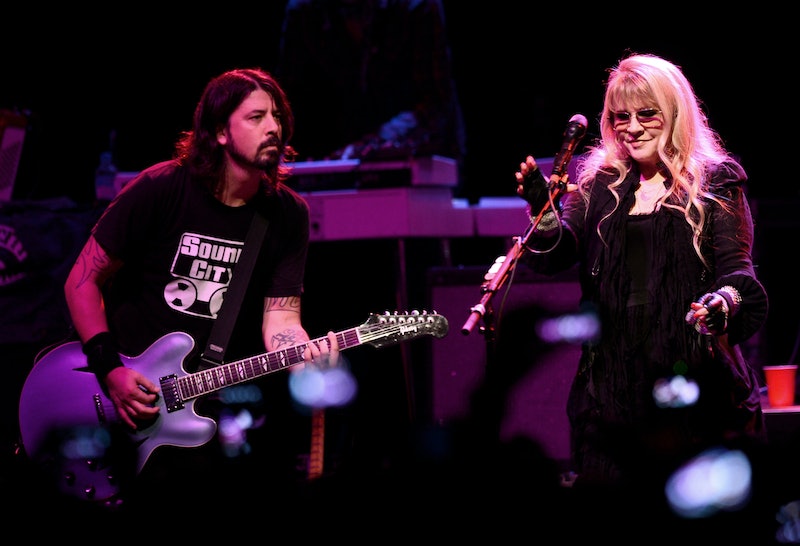 Last Friday, something pretty gnarly happened at a Foo Fighters concert: Rock deity and all-around delightful human (don't agree? Watch every episode of Sonic Highways and get back to me) Dave Grohl fell off the stage and severely injured his leg at a show in Gothenburg, Sweden. But then, being the awesome person he is, Grohl did something, well, awesome: After receiving medical treatment backstage, the Foo Fighters frontman (with some assistance, obviously) sat down in a chair at the front of the stage, elevated his banged up leg, and played the rest of the show. The pain was no match for his rockosity. A number of musicians tweeted their admiration for Grohl, and forever awesome rock goddess Stevie Nicks paid special tribute to his act of awesomeness: During Fleetwood Mac's set at the Isle of Wight Festival, Nicks dedicated the song “Landslide” to Grohl.

Before the band began to play the 1975 hit Sunday night, Queen Stevie brought up Grohl's fall. According to NME, she told the crowd, "Falling off stage, getting up and playing a two-and-a-half-hour set, I think that's awesome."

You said it, Queen Stevie. I wish I was half as tough as Grohl. Alas, I'm the person who had to call it a day that one time the salt on a soft pretzel scratched the inside of my throat. It hurt to drink water. I could not function.

Eh, sorry to burst your bubble, Emmet Brickowski, but not everything is awesome; Grohl injuring his leg is a big ol' bummer. So, how’s the dude doing? What's the haps? Well, after last Friday’s show, the Foo Fighters released an official statement on their website:

As witnessed by tens of thousands in attendance at Foo Fighters’ June 12 show at Ullevi Stadium, Dave Grohl took a nasty spill during the second song of the set. With the help of on-site medical staff who patched him up temporarily, Dave was able to rejoin the band to complete that performance.

While the full extent of Dave’s injuries are still being determined, it was confirmed at a post-show hospital visit that he sustained at least one fracture.

As a result Foo Fighters have been forced to cancel their June 14 appearance at the Pinkpop Festival as well as their June 16 show at the AFG Arena in St. Gallen, Switzerland.

Ready to see the most Dave Grohl-y reaction to a fractured leg ever?

Whatta champ. Here is a video of Nicks and Grohl performing "Landslide" together back in 2013, because why not?