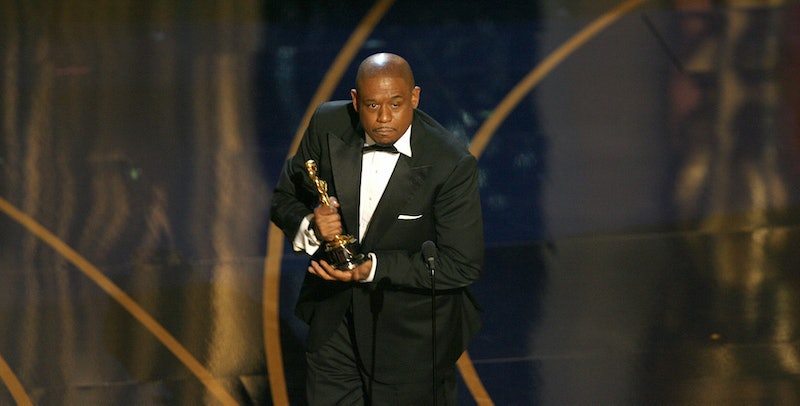 Some exciting Star Wars news: Forest Whitaker could join the Star Wars universe in the standalone film Rogue One. Variety reports that Whitaker, 53, could be cast in Rogue One a spin-off in the Star Wars anthology taking place some time between episodes three and four, Revenge Of The Sith and A New Hope, respectively. And I sure do hope this dream becomes a reality, because it would be a huge win for the franchise. May the force be Whitaker.

Star Wars: Rogue One, with director Gareth Edwards at the helm, follows "the heist of the Death Star plans by a group of rebel fighters." Already cast are Felicity Jones, Diego Luna, Riz Ahmed and Ben Mendelsohn; Jones will be playing a rebel soldier and Luna and Ahmed members of the Alliance. Though Whitaker's role is still all but a mystery and maybe not even a reality, the Star Wars universe would do well to woo him. Not only because he's one of the greatest actors of his time, but because even in a galaxy far, far away, there are very few prominent black characters.

Were he to be cast, Whitaker would be joining Samuel L. Jackson, who played Mace Windu, and of course the incredible Billy Dee Williams as General Lando Calrissian. James Earl Jones, the voice behind Darth Vader's mask, is another huge black actor that helped make the series a phenomenal success, but he was the voice and JUST the voice of Darth Vader. Then last December with the highly-anticipated release of the trailer for Star Wars: The Force Awakens, things got predictably ugly when some viewers made racist remarks about a black character in a stormtrooper costume. He's 22-year old actor John Boyega who, besides living every kid's dream, had the greatest response to the racist backlash. "Get used to it :)," he said on his Instagram, noting how absurd it was that fans' suspension of disbelief could extend to everything in the Star Wars canon but not to racial diversity.

As mentioned, Whitaker's "maybe" role is yet unknown, but whether he plays a villain or a protagonist takes a backseat to his inclusion, which, I must concede, would be symbolic. And I would guess that the folks over at Lucasfilm know that. But Whitaker wouldn't just be a win for the diversity of the series. He's an incredible actor, a rare king among men, and in fact, he made history when he won the Academy Award for his performance in The Last King Of Scotland in 2007. In his monumental and moving speech, the actor said, "it's possible for a kid from East Texas and raised South Central L.A.... who believes in his dreams, commits to them with all his heart, to touch them." This would definitely be a dream come true.