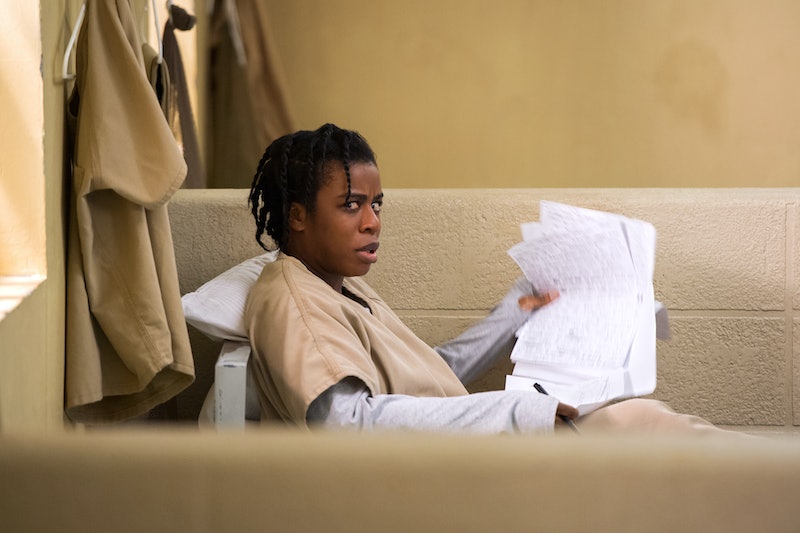 When I was in 7th grade, I wrote a fictionalized ongoing soap opera about my grade — detailing the guys my friends and I had crushes on, who hated who, and so on (but no sex!) — and I distributed chapters to select friends. Of course, word spread and suddenly I had to field requests for name changes, new crushes, and outlandish storyline suggestions. So, it brought back so many memories when I marathoned Orange is the New Black Season 3 last weekend, and the show introduced "The Time Hump Chonicles" by Suzanne "Crazy Eyes" Warren in Episode 7. The story sounded so sexy, so fun, and so hilarious that I'm so sad I can't read the fictional tale in real-life.

Suzanne originally wrote the story for Litchfield's new drama class, but Berdie rejected it for being too sexy. That didn't stop the pages from gaining a following and even nabbing the writer formerly known as Crazy Eyes her own love interest in inmate Maureen. Not only that, writing "The Time Hump Chronicles" helped Suzanne get over her very harrowing grief following Vee's death. Yeah, and there's the whole matter of the sexy stuff: "Time Hump Chronicles" is the sci-fi, "erotically-inclined," space-set love story of Edwina, who is torn between Space Admiral Rodcocker and Gilly.

"It's two people connecting," Suzanne said of her story in the Episode 7. "With four other people. And aliens."

So, if I can't read the actual "The Time Hump Chronicles," here's a rough summary of it that I pieced together from all the descriptions and plot details dropped into conversation on OITNB Season 3. Fortunately, OITNB provides enough juicy — and hilarious — details about the sci-fi erotica story that Taystee compares to Fifty Shades.

Edwina has freckles and an ample bosom. She has the ability to move forwards and backwards through time, but only in one direction and may actually be a robo-doll who is made of pee-proof metal. This leads her to falling in love with Space Admiral Rodcocker of the future and Gilly, who resides in the past.

In one chapter, she goes through a "Trial By Lovemaking" in which she doesn't know one membrane from another and returns to Admiral Rodcocker. In another chapter, Edwina outsmarts the "orgasmator." She lives solely on Rodcocker's semen at a certain point in the story and experiences both of his penises (yes, he has two).

A "time humper" from the future who has two penises and a birthmark (originally named Donaldschlong). His appearance is based on prison guard Donaldson. Rodcocker is never fully present when he's with Edwina, and he prefers their relationship to remain open — so open that he's seeing other women in other dimensions. At one point, Edwina leaves the Rodcocker for Gilly, but she returns to Rodcocker during the chapter that contains the "Trial By Lovemaking." He has semen that contains extra protein and his clothes are vaporized at one point.

Rodcocker also has an affair with Sunflower, who also experiences both his penises and says, "I can feel you in my eyeballs." Whoa!

Some describe this past dweller as a "wuss." Others believe he is the purest soul in the universe and that his love for Edwina is true and deep. Perhaps he's just the sensitive type and maybe that's what causes Edwina to leave Rodcocker for Gilly in a chapter. But, she eventually returns to Rodcocker.

Lily Sprinkle, Dude Made Out Of Vaseline, & Other Characters

Vaseline Man makes a hot, but tragic appearance in Chapter 3. Lily Sprinkle pees on everyone. Sunflower is mean to everyone, because she's the character you love to hate.

In a fan fiction version of Chapter Nine, the characters come out of a wormhole and meet sexy vampires.

Sadly, that's all I know for now. Perhaps "The Time Hump Chronciles" will return in Season 4.

More like this
The 'Firefly Lane' Book Ending Teases Way More Tears To Come In 2023
By K.W. Colyard
'Bridgerton' S3 Teases Exciting Social Season For Penelope Featherington
By Bustle
'Shadow And Bone' Season 2 Pics Show Mal & Alina Starting A New Journey
By Bustle and Bustle UK
Everything To Know About 'Money Heist: Korea' Part 3
By Gretchen Smail
Get Even More From Bustle — Sign Up For The Newsletter