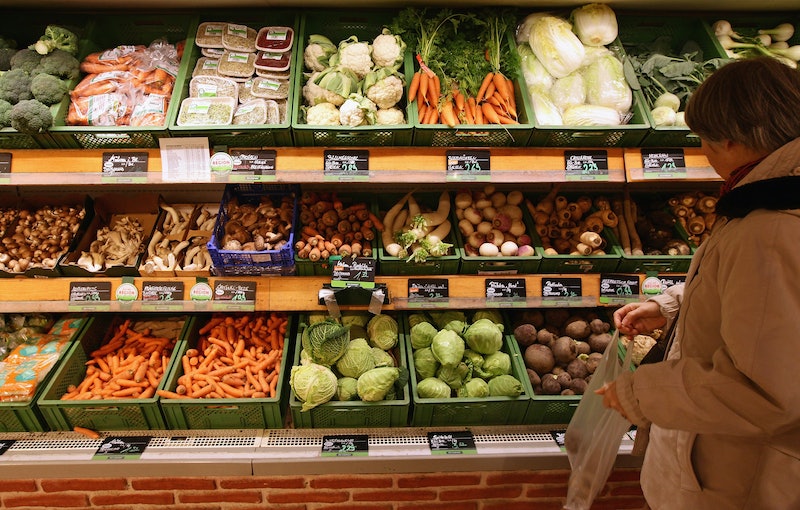 If you thought your diet could only impact your unborn kid while you were pregnant... well, think again. Scientists at the Medical Research Council (MRC) and the London School of Hygiene and Tropical Medicine have uncovered some pretty surprising stuff on the matter, and it should serve as an all-important reminder of just how crucial proper nutrition is for women worldwide. In a study published in the medical journal Genome, researchers shared that a mom's diet during conception can permanently change a gene that impacts both her child's immune system and their cancer risks later on. (Yep — huge stuff.)

According to the study authors, it all has to do with a little thing known as the VTRNA2-1. In a nutshell, the so-called tumor suppressor gene is apparently super vulnerable to changes in a woman's diet during those first few days of conception, and can be significantly altered in a body that isn't getting the proper nutrition. Once its anti-cancer and pro-immunity building powers are weakened, the baby is at a greater risk of contracting those diseases later on in life. (Even if said baby is the tiniest of zygotes at the time all of this is happening in there.)

Experts are calling this the "first concrete evidence" that a mother's diet before pregnancy matters in some ways just as much as her diet during pregnancy, and to hear Professor Andrew Prentice talk about it, this is pretty big. Especially since while we've known for a while that parental genetics can directly impact a child's DNA, the concept of those genetics getting thrown for a loop during conception is pretty astounding. Andrew Prentice, the study author and director of the MRC International Nutrition Group at the London School of Hygiene & Tropical Medicine said in the report:

The potential implications are enormous. In this particular example, the gene involved is really crucial — it lies at the centre of the immune system so it affects our susceptibility to viral infection. At the very beginning of fetal growth, the way it is labelled is going to affect the baby's health for the rest of its life.

If a mother’s diet is poor then it causes a whole lot of damage to the genome which has a shotgun effect, so a baby might have possible adverse outcomes. This general phenomenon might explain preterm births, problems in pregnancy, brain defects, or why some babies are born too small.

Of course, now that we're armed with this knowledge, experts are eager to go about fixing the problem however they can. For starters, they've "moved the target of intervention to before pregnancy," said Prentice. "Our work is showing the stable door has been closed by then, so we've got to get it right for conception. We could potentially clean up a lot of adverse pregnancy outcomes by getting the diet right."

But if you're wondering just what the "right" diet is exactly, scientists are still figuring that one out. According to The Guardian, the next steps for experts at the London School of Hygiene and Tropical Medicine and MRC will likely be to identify the combo of nutrients needed to protect unborn children from these future health risks. In the meantime, experts say they hope that the study will at least shine some much-needed light on the hunger crises throughout the world — particularly in areas where young wives are expected to have children soon after marriage. (Though this, I admit, gave me slight pause. Shouldn't we care about improving the nutrition of all young women in developing nations, and not just because they may have children early? What about giving adolescent girls good nutrition for their own sakes?)

In light of the study, The World Food Programme's senior nutrition adviser Martin Bloem had some things to say, as well:

Before, everyone understood that nutrition could change the expression of genetics, but this study is the next step. It shows that adolescent girls' nutritional status determines their future health. It is therefore critical that even in our humanitarian response, we focus on improving their nutrition to impact future generations, and it should be part of the 2015 goals.

While all of this sounds fantastic, improving the state of world hunger is of course no easy feat. According to the WFP, some 795 million people worldwide don't have enough food to lead what would be considered a healthy and active life. (That translates to about one in nine people on earth, if you can believe it.) The WFP also calculates that $3.2 billion would be needed each year to reach all 66 million hungry school-aged children.

But for now, at least, researchers just hope that starting small — and identifying where improvements can be made when it comes to maternal nutrition — will have big payoffs for future generations. (Just imagine: cancer and other disease rates cut, all due to women getting the nutrition they need? That's a world I want to live in.)