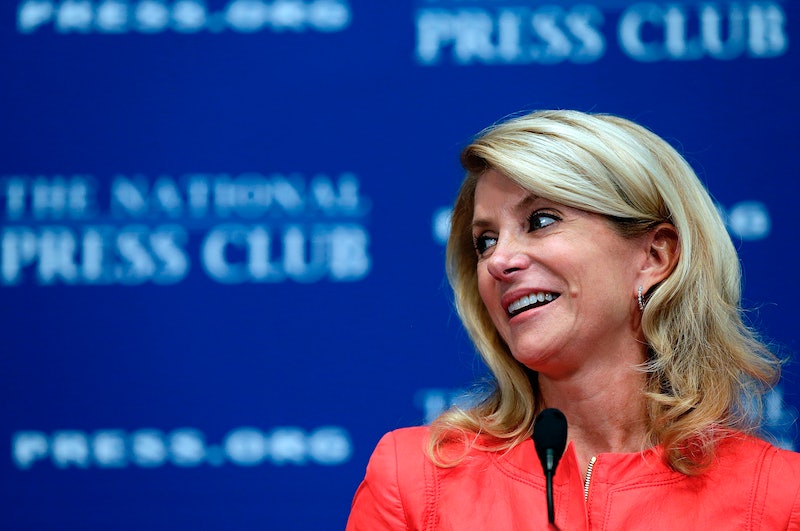 With new anti-abortion legislation cropping up every week, the state of reproductive rights in the United States is looking pretty grim. Wendy Davis, a former Texas state senator, has always been a huge advocate for women's reproductive rights, including the right to have a legal abortion, and she thinks American women's health is in danger. In her memoir, Forgetting to be Afraid, Davis bravely revealed that she had two abortions herself, and Davis has had a lot to say about abortion. She constantly stood up for Texan women while serving as a legislator and running for governor, and she revealed on Friday that she's starting her own women's organization that will focus on "productive rights," which includes reproductive rights.

She's perhaps best known for her 11-hour filibuster in the Texas Senate to block a bill that would ban abortion after 20 weeks of pregnancy in 2013. Despite the hard work of legislators like Davis though, many such bills have passed across the country, and now Congress is trying to push through a nationwide 20-week abortion ban. With hundreds of anti-abortion laws already introduced across the country this year, American women's reproductive rights are slowly being stripped away on numerous fronts.

Here's what Wendy Davis has said about the U.S.'s abysmal abortion affairs.

The ban will have devastating consequences when a woman is experiencing medical complications. And unfortunately, it bans abortion before a woman may receive important information about her own health and the health of her pregnancy. Fewer than two percent of abortions occur after 20 weeks, and while they are uncommon, it is important that a woman and her doctor have every medical option available.

On A National 20-Week Ban

Well, again, this is Senator Graham demonstrating the problem that the GOP presidential candidates have with women. This is clearly unconstitutional, and in the states where it’s been challenged and gone up to circuit courts, it’s been held to be unconstitutional. If it makes its way to the Supreme Court, I expect the same response will occur. And again, it is a politician using women as a political wedge to try to gain an advantage in a political contest, in a way that has devastating impact, ultimately, on women’s rights and constitutional protections.

While running for governor in 2013, Davis spoke about abortion at the University of Texas at Brownsville, saying:

When I believe women's health is in danger, I’m going to stand and fight to protect that. This isn't about protecting abortion — it’s about protecting women. It’s about trusting women to make good decisions for themselves and empowering them with the tools to do that.

On The Vagina Business

Lawmakers, either get out of the vagina business, or go to medical school.

On Why She Filibustered

In a 2013 op-ed for The Washington Post on why she filibustered, Davis wrote:

I stood up to filibuster the bill because Texas Republican leaders would rather pursue a partisan agenda than help Texas women. I stood to oppose the bill because it rolled back constitutional rights and would reduce the number of women’s health clinics from 42 to 5, thereby threatening the health and safety of thousands of Texas women.

While speaking at a luncheon in 2014, Davis criticized Texas Governor Greg Abbott for supporting a ban on abortion in all cases except when the mother's life is in danger, saying:

Maybe if he put himself in the place of women who’ve had to make the heartbreaking decision to end a pregnancy instead of sitting on high, belittling the pain and trauma they’ve been through as though he has a right to judge, he’d understand that his position is offensive to every woman who’s ever stepped foot in this state and a betrayal of everything we stand for.