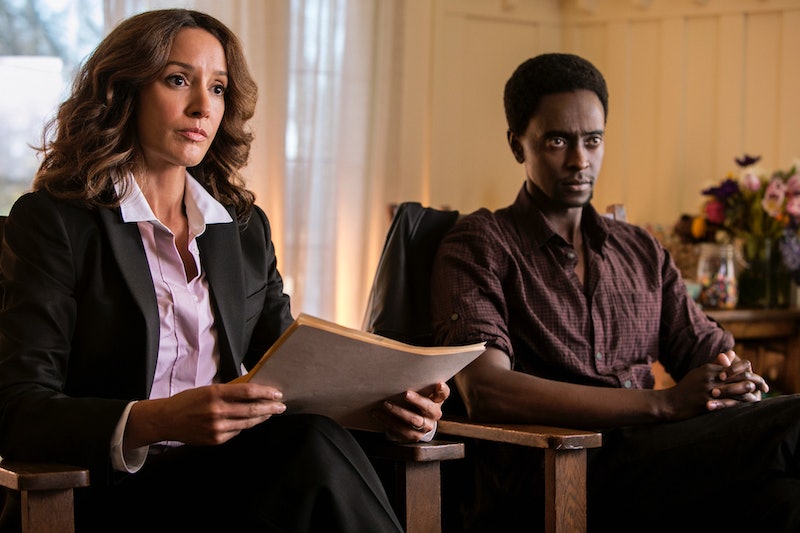 Life after death: That's one of the biggest mysteries out there. Many people have beliefs and theories, but there's no way of knowing what exactly is true — or do we? That's the question the characters will try to answer on Proof, which premieres on TNT on June 16. The new series follows Doctor Carolyn Tyler (a non-welding, non-dancing Jennifer Beals), who is having a rough go of thing. Her teenage son has died, she's had her own near-death experience, and her marriage has fallen apart. She's persuaded by cancer patient and inventor Ivan Turing (Matthew Modine, my celebrity crush circa Married to the Mob) to investigate reincarnation, near-death experiences, hauntings, and other supernatural goings-on to find, well, proof that death isn't the end. So, is this another X-Files scenario, or is there truth behind it? Is Proof based on a real story?

If you're looking to this show for definitive answers about life after death, you're going to be disappointed. Proof is fiction, based on nothing but its scripts. Still, it makes for a good story. Here's what some of the Proofers think about the chances of an afterlife.

Jennifer Beals Is Actually Obsessed With The Afterlife

It may seem like Dr. Tyler has to be the skeptical Scully of the show, but, in real life, Beals is the Mulder — she thinks the truth about the afterlife is out there. "This is certainly something that I've been thinking about ever since I was a kid, and just was always really interested in what I perceived as this mystery that I wanted answers to," Beals told TV Guide. "At a very young age I was reading the Bible every night, and I knew maybe somewhere in that book was the answer to this question—not only of what happens after we die, but who is God or what is God? And what is this existence that happens in between the in breath and the out breath?...Then I got a set of Tarot cards, and started taking books out on the Occult from the library and making all kinds of drawings and collages about mystery and death...which was really upsetting to my mom." If she did find answers through those Tarot cards, she's kept them to herself.

Matthew Modine Has One Theory

Modine's character, a billionaire tech inventor commissioning Dr. Tyler's investigation, is more of a believer. Does Modine share his views? “My personal feeling is that I am of this earth and that I don’t know when it began that people started putting themselves in coffins that don’t decompose and filling their bodies up with formaldehyde," he told Channel Guide Magazine. "All of the things that we do to the human body when it’s dead are obscene to me. It’s a violation. What we should do is be put back in the earth and become a part of the earth again. I think that’s the best chance I have of an afterlife, being part of the earth that I came from billions of years ago." It's kinda gross, but kind of poetic.

Joe Morton Thinks We Should Focus On The Now

The actor best known for playing Olivia Pope's dad on Scandal will step into the scrubs of Proof as Dr. Richmond, who's helping Dr. Tyler on her quest for answers. Morton, though, thinks the question might not be worth asking, and that we should stay in the present. “I don’t lean one way or the other,” he said to the New York Daily News. “If you live a good life, you’ve done well.” For what it's worth, he thinks Papa Pope would agree. “I’m quite sure Rowan would have no opinion on whether there’s life after death,” he told the paper.

Rob Bragin, the executive producer who wrote Proof's pilot, also thinks we should focus on the here and now, though, unlike Morton, he thinks the asking is the most important. "It's really not about death," he told the Los Angeles Times. "It's about life. It's about the journey to find answers, not the answer itself." I know the quest to find answers to life's big questions is what makes us human, but I'd rather watch TV.

Maybe it's because she's executive-producing the show, and therefore wants you to watch it, but Sedgewick hasn't let on what she thinks of the afterlife. Instead, she says the series will give some options. "We present all different possibilities to answer these questions," she says in the above video interview. "Then it's really left up to the audience to answer." Get ready for some critical thinking if you tune into the premiere of Proof on TNT, this Tuesday night at 10 p.m.