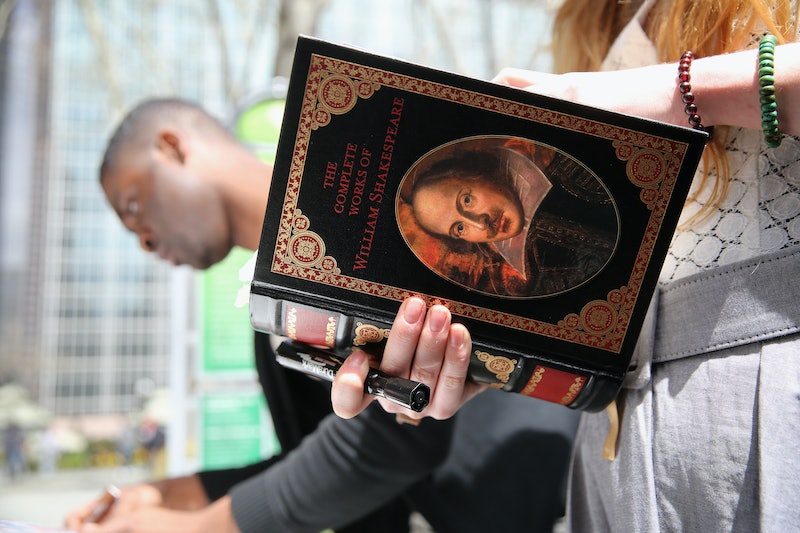 There are three types of people in the world: those who are intimidated by Shakespeare, those who consider themselves Shakespeare nerds, and those who are truly obsessed with the Bard. A casual fan might be able to quote some of his most famous passages in everyday conversation, but a real Shakespeare fan knows there's no reason to do that because we all use words and phrases created by Shakespeare every single day. Instead, an aficionado will tell you the origin of any of Shakespeare's 1,700 words and multitudes of idioms when you drop one into conversation (but can also bust into Hamlet's famous soliloquy at the drop of a hat).

No matter how you categorize yourself, E. Foley and B. Coates's Shakespeare Basics for Grown-Ups: Everything You Need to Know About the Bard is a perfect guide to the playwright's impressive canon. Foley and Coates break down Shakespeare's entire canon for the layperson, making it less scary for those who don't consider themselves experts, while still adding enough facts and tidbits to appeal to the Shakespeare freaks.

Are you a self-identified Shakespeare addict? If you know all 27 of these obscure Shakespeare facts, I'd say you're probably right.

Test you knowledge of the Bard and see if you're a real Shakespeare fan, based on Shakespeare Basics for Grown-Ups:

Shakespeare was born in Stratford-upon-Avon in 1564

OK. I'll admit that this one's an easy one. But did you know that his father was a glove-maker "and, pleasingly, a municipal ale-taster"?

Shakespeare was 18 when he married Anne Hathaway, who was 26

It's speculated to be a shotgun wedding because Hathaway was three months pregnant at the time. But despite the eight year age difference, the two were married for thirty-four years.

Shakespeare had his own coat of arms

Only rich people had the right to buy a coat of arms back in the day. Shakespeare's motto means "Not without right."

He left his wife his second best bed in his will

In Shakespeare's will, his wife "is mentioned in just twelve devastatingly brief words, 'I gyve unto my wief my second best bed with the furniture.'"

Lots of movies and TV shows depict Shakespeare and Queen Elizabeth hanging out together, but that's little more than imagination. Shakespeare did perform at the Queen's court many times, but there's no evidence that the two were pals.

An true Shakespeare fan knows an even more absurd rumor is that Queen Elizabeth is actually William Shakespeare. This is bogus because she died in 1603, about a decade before Shakespeare quit writing plays for good.

Neither did Christopher Marlowe

Real Shakespeare fans don't buy into the Marlovian Theory either. There are similarities between the two playwrights work and Shakespeare's style was influenced by Marlowe, but it's really unlikely that Marlowe "faked his own death due to his work in the Elizabethan secret service and then continued writing under the pen name, Shakespeare."

But Shakespeare did get some help

Scholars can use computers to figure out who wrote what

Part of the reason scholars are able to figure out who wrote what is because of stylometry. "Everyone has their own particular writing style," and scholars have created computer programs to analyze patterns and habits in writer's works, which can help settle disputes about authorship.

Shakespeare’s canon is totally different from his apocrypha

Heminges and Condell organized the plays into three categories: comedies, tragedies, and histories. But you knew that already.

The three Roman plays are based on Plutarch’s Lives...

There are further subcategories of plays, like the Roman plays. This category includes Antony and Cleopatra, Julius Caesar, and Titus Andronicus, and these stories are based on an English translation of a book by a Greek philosopher that included "a series of biographical portraits of great Greeks and Romans."

The Histories are organized into tetralogies

The ten plays in the canon that deal with English history are considered the Histories. The First Tetralogy consists of Henry VI, Parts 1, 2, 3, and Richard III. The Second Tetralogy is also referred to as the Henriad because it includes Richard II, Henry IV, Parts 1, 2, and Henry V.The rest of the plays are categorized into the Wars of the Roses tetralogies.

The original Globe was destroyed by a fire in 1613 because, "during a performance of Henry VIII, a cannon used for special effects accidentally set fire to the thatched roof." Oops.

Shakespeare was responsible for about 1,700 new words in the English language

Some of the more obscure additions include "waggish," which means playful, and "Winchester-goose," which refers to an inflamed or swollen groin as a result of venereal disease.

King Lear used to have a happy ending

Shakespeare's King Lear is based on an ancient legend of the British King Leir. Earlier tellings of the story had a happy ending, so Shakespeare totally shocked the audience with his less-than-happy one.

“Thou” and “you” are totally different

If you're reading Shakespeare, don't ever replace a "thou" with a "you" because "Shakespeare carefully selects these terms in several places in his plays to indicate subtle shifts in relationships and attitudes." "Thou" is informal, while "you" is a sign of respect, a more formal term. Not the same, at all.

Shakespeare played the Ghost in Hamlet

"According to hearsay it was also the occasion of his own greatest performance as an actor when he played the Ghost."

Any theatre nerd knows a monologue is a long speech. When that monologue "gives the impression the character is speaking his thoughts aloud, letting the audience into his mind, but is apparently not heard by any of the other characters present," it is referred to as a soliloquy. An apostrophe is a monologue that is "addressed to an absent character, abstract idea or imaginary person."

Romeo and Juliet was not a critical success

Samuel Pepys wrote, "It is a play of itself the worst that I ever heard in my life."

“Bard” is ancient Gaelic for “poet”

Shakespeare is called the Bard because he is "the definitive poet, and recognized not just in Britain but across the world as such."

It’s not “Alas, poor Yorick! I knew him well”

It's actually, "Alas, poor Yorick! I knew him, Horatio." Feel free to correct anyone who misquotes.

There are 154 Shakespearian sonnets with three main dramatic personae.

There's the Fair Youth who appears in most of the sonnets, the Speaker, and "a 'Dark Lady' who stalks the last poems in the arrangement."

One theory says Shakespeare used real witches' incantations in the opening of the play, so those same witches placed "a curse on the play and those who performed it."

No one really knows the correct chronology of Shakespeare’s plays

The First Folio doesn't date the plays, and Shakespeare didn't keep great notes, so no one knows exactly which play came first. Scholars have a general timeline, based on primary sources and other clues from the period, but don't let anyone tell you they know the chronology for sure.

There are two lost plays

Cardenio and Love's Labour's Won are the two lost plays and "among the most sought-after as-yet-undiscovered works of literature in the world. They are mentioned in historical documents but no text for them has ever been conclusively discovered." If you find these, you'll really be the ultimate Shakespeare fanatic.